From the shelves to our phones, there is an absolute obsession with women’s bodies across all forms of media. While magazines hold the magnifying glass and the curser is poised to nip and tuck the truth, the self-esteem of young girls are plummeting, and bullying and body image issues are skyrocketing right in front of our our eyes.

“I want magazines to reduce the amount of photoshop they use on their covers and in their editorial,” says Erin Treloar of Raw Beauty Talks on her #LessIsMore campaign. “I’d like to see that by the end of the month there are 10,000 signatures, at which point I will sit down with a couple of key magazines to talk about their thoughts on Photoshop, how much they are using and if its possible to adjust it.”

This is Erin’s story on why it needs to change.

Mirror, mirror on the wall, who is the skinniest and prettiest of them all? It certainly can’t be me, because sometimes my jeans feel too tight, I have these lines under my eyes, enough skin under my arms to fly away, my thighs touch, and is that cellulite?

That’s not what I see when I open my phone, when I look through a magazine, or when I turn on the television.

Raw Beauty Talks wants you to see what’s really there in the mirror, a beautiful, empowered, unique and natural woman ready to take on the world as she is. They want you to know that less is more.

But how do we get the conversation going? We start from the beginning. 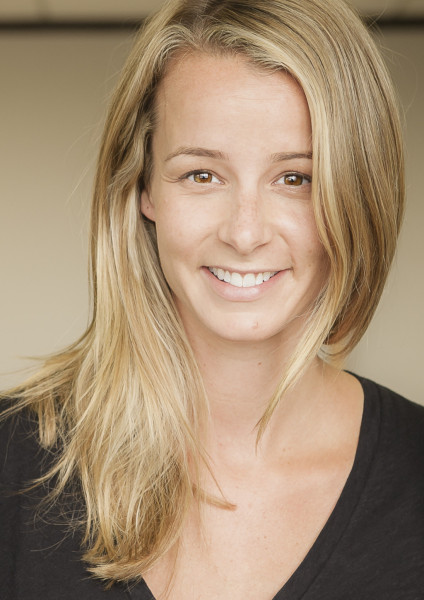 Founder of Raw Beauty Talks, Erin Treloar sits on her bed as a teenager, as many of us did, and flips through Elle, Cosmo, Vanity Fair, Vogue, looking for a glimpse of her own reflection, an image that says her hips, her boobs, her skin, her waist, it’s all normal; something that she can believe in and hold on to.

What she finds instead is a bottomless wishing well, a checklist of what makes a woman beautiful, far beyond her reach, in a word: flawless.

Erin could have been you back then, and she could be the young girl sitting on her bed now doing the exact same thing, because while the year has changed the pages haven’t; we still see magazine covers taunting girl after girl with an unattainable image of beauty.

“In high school I struggled with an eating disorder that was perpetuated by this image of beauty that I saw in the magazines, in the media and celebrity culture,” says Treloar. “I would ask myself ‘why don’t I look like that?’ and then stand in front of the mirror and think, ‘if I could jut shave an inch off my waist…”

From there, what started as trying to improve her body spiralled downhill beyond her control, to the point where, at 5’11 she weighed 89lbs, she was losing hair, her internal organs were shutting down, and she was unable to process what was wrong and right.

“I had completely fallen into an eating disorder, and every single thing that I was hoping to achieve by losing that inch, I completely lost; friends, my ability to do dance, those feelings that you’re looking for; love and support, that I always had from my family but craved from friends and boys, it was all gone in the process.”

While hospitalized, Erin learned some basic tools that helped her look at life differently and take control of her own health, what she wanted her future to look like and what was really important.

“And here I am, a couple of weeks away from turning 30, I’m pregnant, and in the last year I’ve become very clear in my thoughts, but I still have questions.”

This #LessIsMore petition is really close to her heart because it all comes back to what sparked her journey, but now she has the chance to speak up, and so do you.

“It’s a big battle to face, and I know that, but I also know that if somebody doesn’t do it then its never going to change. It’s not a movement to say never wear makeup again, its more like a metaphor for stripping everything down and having an honest, real conversation.”

In 2012, Seventeen Magazine pledged a “Body Peace Treaty,” following the successful protest and 250,000 signature petition by 14-year-old Julia Bluhm, that asked them to promote images that encourage a healthy, unaltered body image.

Seventeen’s eight-point plan outlined their promise to “never change girls’ body or face shapes,” and would only feature “real girls and models who are healthy,” in their published photos. 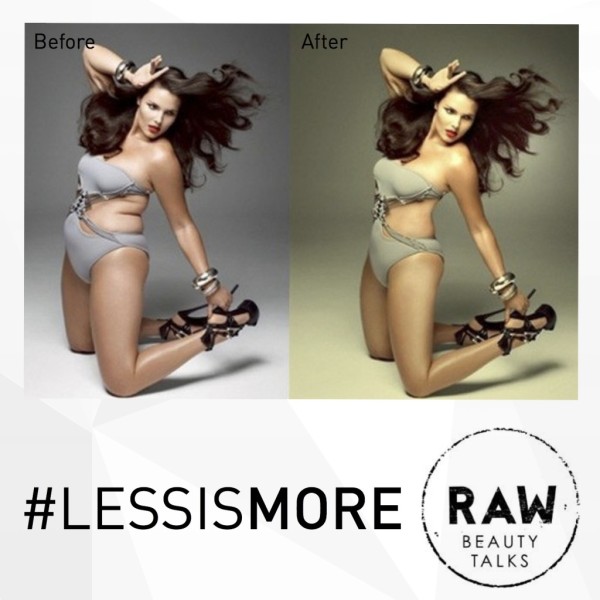 “If one magazine could commit to that, I would be incredibly happy,” says Treloar. “Can they not stop taking off any hint of a muffin top? That would be so awesome, thanks!”

The “I woke up like this,” movement can take place again, if we persistently demand it. It’s time to have a serious conversation with the women and men in our lives about what is taking place behind the scenes. It’s time to confront the business owners who project these unrealistic views and tell them that we are aware Justin Bieber’s package was enhanced, that Jennifer Lawrence has probably eaten lately and that Julia Roberts has laugh lines. We want to see it all.

A very pregnant Erin Treloar sits across from me at a coffee shop in Gastown.

Do you know if you are having a boy or a girl?”

I find out tomorrow.

That’s so exciting! Do you think that the way you are going to approach parenting is influenced by what you do?

Will it affect how I parent? Yes, but not because of what I do with Raw, but just because everything that I’m talking about I’m so passionate about, and…the thing is that I don’t know what all the answers are, which is why Raw is a conversation, because I can’t figure it out myself. Nobody knows the answer or else we wold likely be doing it.

The goal is to get as many people involved in this conversation, to get them talking so we can figure out a way.

So let’s go back in time and pretend that Erin is that girl again, sitting on her bed reading a magazine, but this time she sees a photo on the cover that isn’t photoshopped, she sees a real girl, with curves and blemishes. Can you imagine the difference it would have made when she looked in the mirror and believed she was beautiful too?

Let’s aim to be our best selves, and not the version we see on the shelves.

The goal of Raw Beauty is to help women find more confidence in their own unique beauty, we do it by providing a platform for convo surrounding beauty and by advocating for transparency in media.

To date, Erin has published more than 200 interviews and untouched photographs of women without make-up, photoshop or filters including celebrities and influencers like singer-songwriter Colbie Caillat, TV personality Jillian Harris, Olympic gold-medallist Jamie Anderson and Alexis Jones, founder of I Am That Girl. Stay tuned to Vancity Buzz in the coming weeks when we’ll be featuring some work Raw Beauty has done.