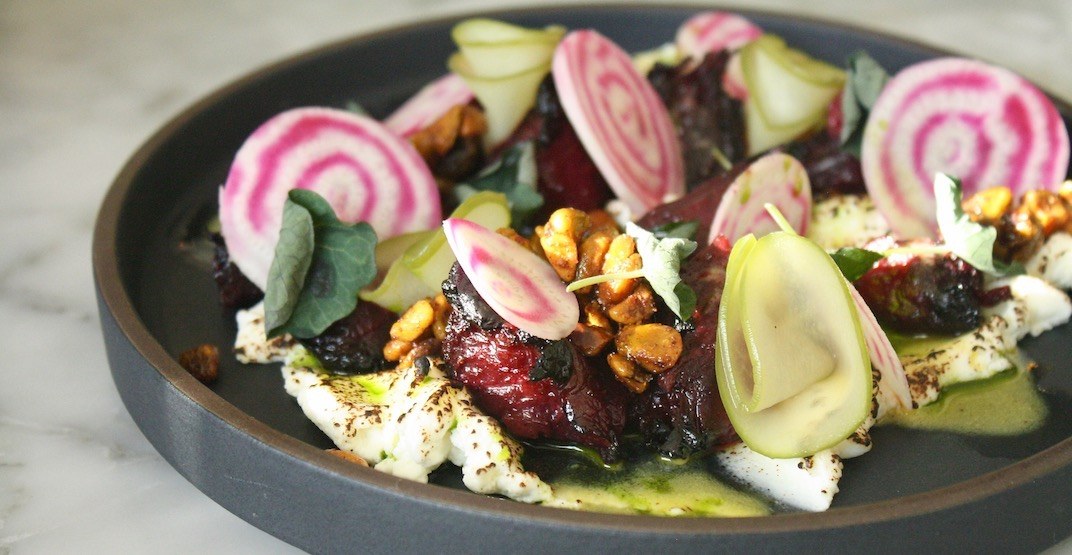 There’s something about AnnaLena.

If you’ve dined at the 65-seat Kitsilano eatery before then you know what we mean. The restaurant just has that undeniable “cool factor”, that je ne sais quoi, if you will.

It’s the feeling a patron gets hit with midway through a meal – like all of the stars in their foodie sky have aligned. A good experience through and through, one they’d like to duplicate and taste again as soon as humanly possible.

We can’t pinpoint what it is exactly – it’s somewhere between the LEGO Storm Troopers, Japanese Bearbrick figurines, and the perfectly-plated ginger soy pork belly, or maybe it’s a combo of it all.

It’s also quite possibly the easygoing attitude of the staff and surroundings paired with the delightful sensations of the elevated modern Canadian cuisine from the mind of Chef Mike Robbins, who named the restaurant after his two grandmothers – Anna and Lena.

This spot has been making waves since it opened in 2015 by Robbins and his partner and AnnaLena General Manager Jeff Parr, the same year it was named one of enRoute’s Best New Restaurants.

With the natural daylight and marble and black tables, this place is an Instagrammer’s paradise. And that’s before we’ve mentioned the food and the stunning way it’s plated.

With a dozen savoury offerings ranging from $5 to $34, along with a tasting menu for $74, AnnaLena’s got something that would catch most people’s eye during dinner service.

Please note that you must save room for dessert – especially for the Chocolate Bar. A dreamy combination of hazelnut praline, hibiscus honey, tonka bean, and creamsicle.

They’ve also got a affogatto with corn flake ice cream and a chicken skin dipped in milk chocolate, so expect a sweet finish to your meal here.

It’s easy to get lost in the cocktail list, too.

Overall, the irresistible charm of this spot is what makes us want to come back.

From the shelves of Robbins’ personal collectables that great you, all the way to the complimentary mignardises (a traditional French parting gesture from the kitchen) that you’ll still be tasting on your way out to door – it’s safe to say we’re still enamoured with this bistro in the heart of Vancouver’s favourite beach neighbourhood.

This article was powered by The NEW American Express Cobalt™ Card. Earn 5x the points on eats & drinks*, giving you more rewards for your next night out. *On eligible purchases. Conditions apply.