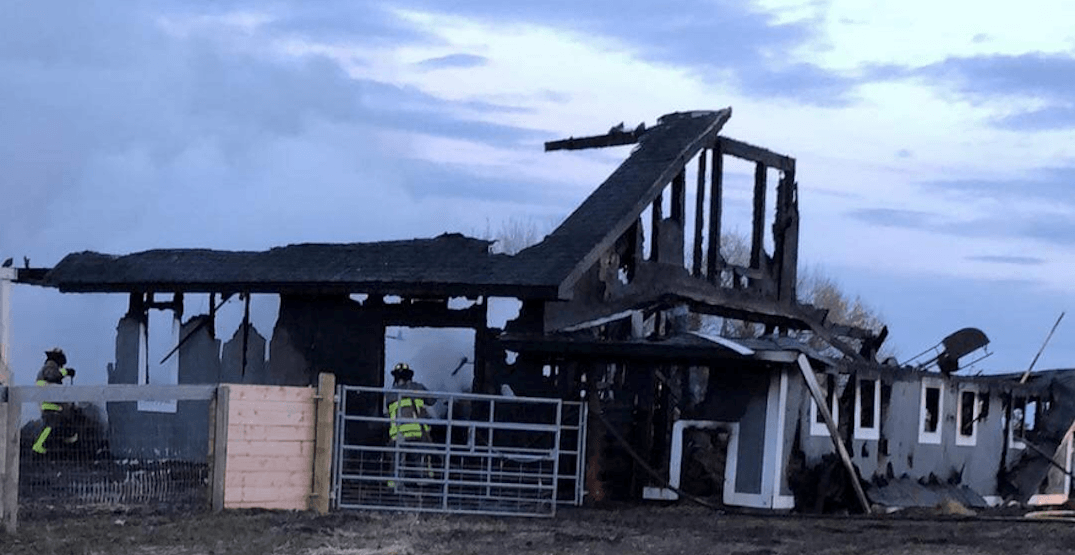 The burned down barn (farrmanimalrescue/Instagram)

“The entire night was a daze of confusion, vomiting, screaming.”

Melissa Foley’s words recounting the devastating fire that took the lives of over 35 rescue animals were shared in a letter from Farm Animal Rescue and Rehoming Movement (FARRM).

The fire, believed to have been caused by an exploded heat lamp, burned FARRM’s barn to the ground on April 11 — a memory that Foley details in her letter.

According to Foley, the fire was brought to her and her husband’s attention by a neighbour as the couple were making dinner.

“Someone driving past notified us that the barn was on fire… not just on fire but at the point of collapsing. It wasn’t even believable. We had just been out there. What ensued was a panic.”

Foley wrote that they ran straight to the barn, burning their hands attempting to open gates that had taken on heat from the flames.

The couple’s efforts — and burns — were not in vain, as the two managed to get many animals out of the area — though the panic caused confusion for some of the animals.

“We did our best, and yet we lost too many. The animals were impossible to reason with,” she wrote.

“All they knew was their home, and even though it was on fire and burning, they wanted to re-enter the building. It had always been a safe place for them.”

Foley noted that, eventually, even she had to be physically restrained to keep from running back into the burning building in an attempt to save more of the animals.

“The stranger that had notified us of the fire stopped me as I attempted to run into the back of the barn, desperate to help the one animal I knew was locked up in a pen… Daisy. It had not occurred to me that there was no hope of that happening. Instead, I was pinned to the ground, left to sob while reality started to set in. This is a night I wish I could forget.”

Foley also stated that many of the animals who did survive the fire were left with injuries, both in body and mind, as one sheep refused to eat in the days after the event, and one goat was left to search for his mom and brother — both of whom didn’t make it out.

FARRM’s pig, Nakasha, is still traumatized, getting upset by the sounds of vehicles, visitors, and odd noises, according to the letter.

“Right now our residents are recovering and starting to enjoy the summer,” Foley wrote.

“They are living in horse shelters where they have protection from the elements. They are comfortable for the upcoming summer months.”

The farm that took Foley and her husband five years of work to build has burned down to a blackened shell, leaving the surviving animals in a bad spot for the upcoming winter.

Foley noted they may have to rehome the animals and “break up the big family that you have all come to know and love or we can fight like hell and find a way to keep moving forward.”

More information about the future of FARRM is expected to come within the next few weeks, and anyone hoping to donate towards the animals and their caretakers can do so through FARRM’s website.

FARRM also included a list of animals that were lost on April 11.