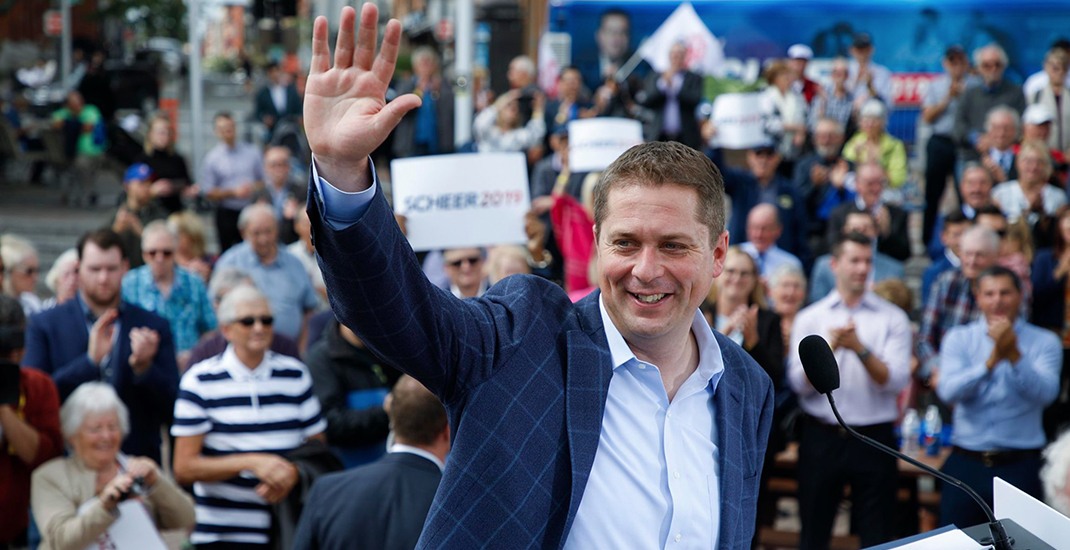 Conservative Leader Andrew Scheer warned Tuesday that national unity is at risk without a change in government.

The federation must be reimagined for the 21st century, Scheer said as he made a direct pitch to Quebec voters, who polls suggest are increasingly voting for the separatist Bloc Quebecois.

Scheer quoted Sir John A. Macdonald, Canada’s first prime minister, as saying that “everything is to be gained by union, and everything to be lost by disunion.”

“Sadly the wisdom of our first prime minister is lost on our current one,” Scheer said.

He repeated his pledge to work with all the provinces on a new interprovincial trade deal, and added to it by announcing he’ll convene all of the premiers to get started on a new agreement within his first 100 days in office.

The existing deal doesn’t go far enough to ease the barriers to trade from one province to another, he said.

“When you talk to different manufacturers and producers of all different types of products, there are still many different hurdles,” he said.

Scheer’s political battle in Quebec is being fought on several fronts. His party had its strongest showing ever in the province in the 2015 election, and held 11 seats when the election was called. In this campaign, the Tories were hoping to scoop up another 12, most in the region around Quebec City where he is travelling Tuesday.

Several of those seats were historic Bloc strongholds that flipped to the NDP during the great orange wave of 2011 and then to the Liberals in the last campaign.

Scheer has been campaigning in the last few days by raising the spectre of a Liberal-NDP coalition government as a fear tactic, alleging it would see deficits go through the roof and end in tax increases.

On Tuesday, he also struck again at the Bloc, accusing their leader of wanting to get going on another referendum on separation.

“It’s quite clear that if Quebecers want their members of Parliament to be around the decision-making table then it is the Conservatives that can represent their issues and defend their interests,” he said.

Local Conservative candidate Pierre Paul-Hus said Bloc candidates have it easy in campaigns, because they are never challenged on the fact that whatever they promise, they won’t be able to deliver.

But as Scheer campaigns this week on the theme of what he’d do in his first 100 days in office, he’s also being repeatedly questioned on how he’d achieve any of his goals if he finds himself in a minority situation with no obvious allies in Parliament.

His answer: He intends to form a majority.

The notion of minority status is one of several themes Scheer shied away from discussing directly in recent days.

Though on Tuesday he sought to position himself as the natural champion of Quebec’s interests at the federal level, he would not directly discuss several issues that are part of Quebecers’ political calculus when it comes to who to support on Oct. 21.

He wouldn’t answer whether he believes the province’s new secularism law, Bill 21, which restricts the wearing of religious symbols by public servants, is discriminatory. Scheer said with the bill now before the courts, his government won’t intervene.

He would not say whether — as the NDP has promised — he’d formalize the existing agreement between Quebec and the federal government that allows the province to have a greater say in picking Supreme Court judges. He said a Conservative government would follow the current approach.

He would not say whether he believes Quebec gets too much money in equalization payments (it received nearly $12 billion last year), and whether he’d revisit the formula, as is being requested by the Alberta government.

The more important thing is to get Quebec off equalization, Scheer said.

And he would also not get back into a debate on social issues.

Scheer ended up finally addressing his personal anti-abortion views the morning after a challenging French language debate that saw the other leaders gang up on him. He had previously avoided answering questions about his own opinion on abortion, saying only that he’d oppose any attempt to get the federal government to restrict abortion rights.

When asked Tuesday whether he might do the same for his current position on same-sex marriage — he’s never been clear about whether he still opposes it, as he did in 2005 — Scheer did not directly answer.