The Canucks have been struggling of late, and unsurprisingly during this time their penalty kill has been abysmal.

In the 11 games since Brandon Sutter was injured, the Canucks have given up 11 power play goals. This stretch has caused the Canucks to drop to fourth in the Pacific Division and outside of the playoff picture in the Western Conference.

The Canucks are now ranked 23rd in the NHL on the PK which, unless it improves, will make qualifying for the playoffs rather difficult.

There have been a few glaring issues with the Canucks penalty kill that have resulted in their sharp decline in effectiveness. We’ll take a look at where the issues are and how they can fix these mistakes.

The first issue that is plaguing the Canucks penalty kill is how passive the forwards are when the opposition attempts to enter their zone. The attacking team has been able to carry the puck into the Canucks zone with relative ease, allowing them to set-up and have sustained pressure. The Canucks should be attacking the oncoming players before they gain the blue line, with hopes that the pressure will force a dump in with minimal pressure from forecheckers.

Here against Los Angeles, Drew Doughty is able to gain the blue line, drop the puck to Milan Lucic and skate past Sbisa. Adam Cracknell then pressures Lucic, who dumps the puck into the corner. Since Doughty was able to gain the line with speed rather than being forced to dump the puck in before he entered the zone, it allows the Kings to create a 2-on-1 situation behind the net.

Watch as both Kings forecheckers are already at the top of the circles when Lucic plays it behind the net.

If Cracknell had pressured Doughty before he entered the Canucks zone, it would’ve forced the Kings to dump and chase rather than putting Dan Hamhuis in a pressured situation.

Alex Burrows doesn’t pressure John Klingberg’s lane soon enough, which allows Patrick Sharp to become an easy passing option for Klingberg. The Stars defenceman is able to flip the puck over Sharp, who carries the puck deeper into the zone. Ideally Burrows would pressure Klingberg above the face-off dot in the neutral zone with hopes of eliminating his multiple passing options.

The Canucks have been guilty of collapsing too low and running out of position of late. The thought process behind the collapse-strategy is good, but the execution has been dreadful. 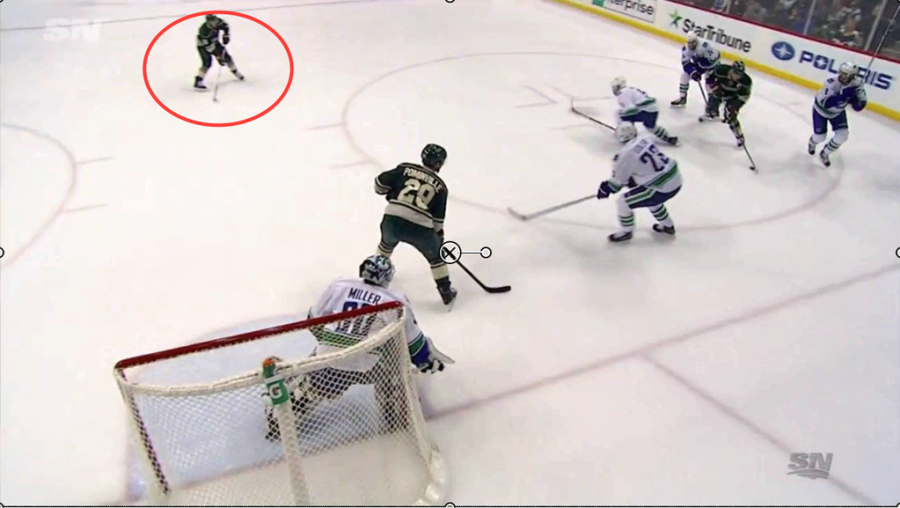 Brandon Prust is the left-side forward on this penalty kill, but he has collapsed and moved all the way over to Cracknell’s side, leaving his point man (Vanek) wide open. Prust should have collapsed to the slot, where he would have remained in Vanek’s shooting lane. 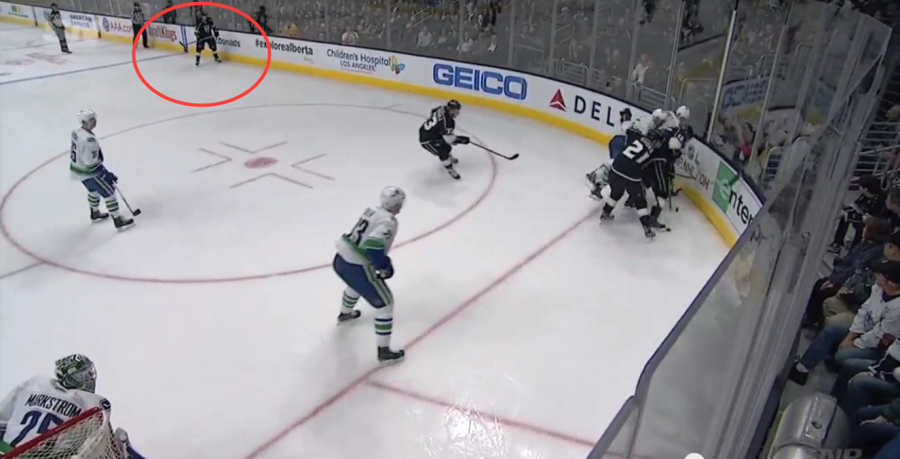 Although Doughty is not in a high percentage area at this moment, the puck eventually rolled out to him, and he was able to slide into the area just above the circle and score.

Adam Cracknell was the forward responsible for Doughty, yet he is in the corner hanging out with Luca Sbisa. Ideally Cracknell would’ve remained slightly higher on the boards to prevent the puck going up to Doughty.

There’s no better example of the Canucks’ troubles than this next image. The Canucks are holding a team meeting behind Ryan Miller. 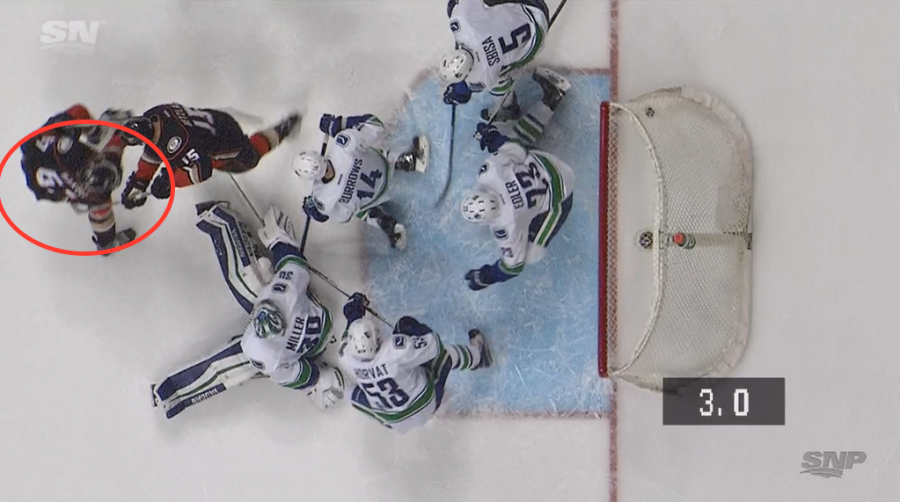 Rickard Rackell (circled) was the goal scorer here, with all four Canucks doing their worst goaltending imitations. With two Ducks players in front of the net, one or even multiple Canucks should’ve been engaging them to avoid the shot, rather than all four of them trying to do Ryan Miller’s job.

Front of the net 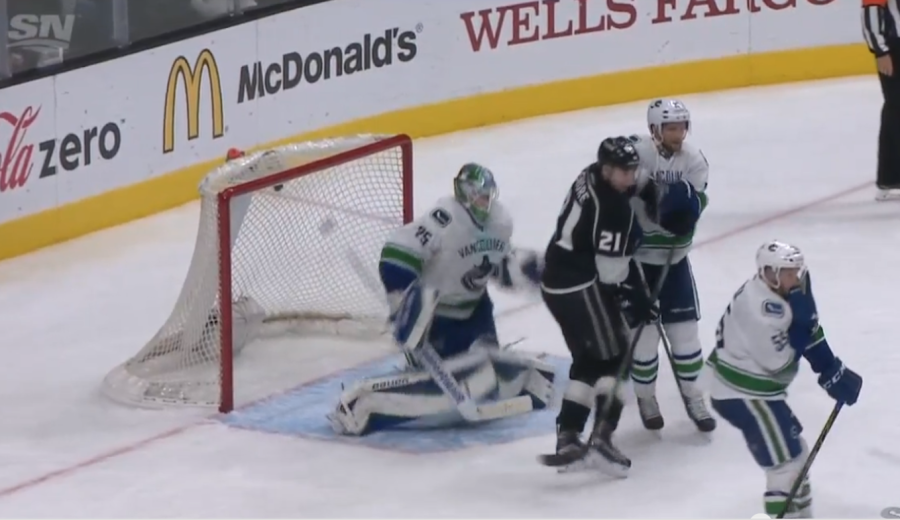 It’s no wonder that Doughty scored here – how would Markstrom even see this shot?

This one is the simplest fix, if you are going to block a shot, make sure to get into the lane. Or in Edler’s case, clear the front of the net. Engage the screen physically and move them out of the way. 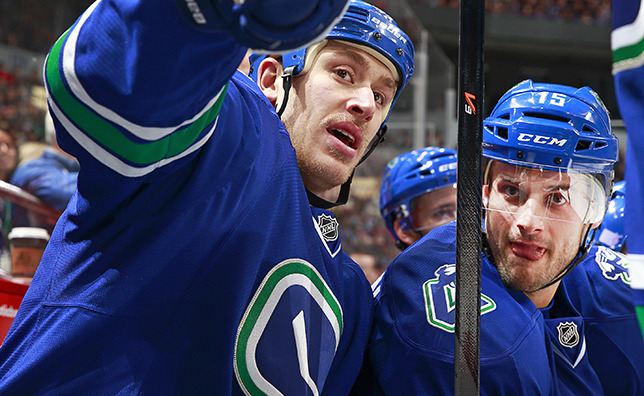 Last season, the Canucks had players like Nick Bonino, Shawn Matthias and Brad Richardson logging big penalty kill minutes. Matthias and Richardson left via free agency, while Bonino was traded to acquire Brandon Sutter. Sutter was expected to take on many of those minutes, and the PK has missed him greatly since he went down with an abnormal injury last month.

All those minutes have now fallen onto players like Bo Horvat, Brandon Prust and Adam Cracknell and they may be in over the heads with the increased workload. This likely isn’t something that is fixable but all three are decent penalty kill options and with the right coaching should be able to become effective when they’re a man down.

How do they fix this?

All of the miscues and issues with the penalty kill outlined above are fixable with some adjustments and coaching.

For zone entries, the Canucks need to be more aggressive before the blue line to limit their passing options and force the attacking team to dump it in. As the game went on against Los Angeles on Tuesday night, the Canucks did exactly that; they pressured more before the zone, forced the dump in and usually were able to send the Kings back to their own zone.

The aggressive collapsing is an issue that can’t be specifically solved with one adjustment as penalty kills are very fluid and must be reactive to the opposition. But if the Canucks can keep a strong box or diamond formation, they will be able to limit the high percentage chances that they have been giving up.

Keeping active sticks and ensuring that they are trying to block passing lanes will go a long way to bringing this penalty kill back to respectability. Clearing the front of the net will allow Ryan Miller and Jacob Markstrom to stop the shots that they should stop.

The Canucks’ playoff hopes will likely depend on the success of their special teams, so fixing their penalty kill quickly should be a top priority.