Allow me to introduce you to Harvey Stripes, Canada’s newest emerging talent. Hailing originally from Ottawa and now residing in Toronto, Harvey Stripes has already made a name for himself along the East Coast of Canada and is looking to conquer the West Coast of Canada and abroad. Having dropped his latest mixtape, “Dollar and a Dream” early this year, Stripes has been in demand. Working with the likes of Hip Hop and R&B’s heavy hitters Mario, Lloyd, Jason Derulo and French Montana on the “Dollar and a Dream” mixtape, has kept Stripes busy. Recently finished touring with Wale on his East Coast Canadian circuit and is currently getting ready to kick off the “Hustlerz Ambition Tour”, right here in Vancouver, as the supporting act to Young Jeezy. With all of this exposure Harvey Stripes has caught the attention of notorious Hip Hop media outlets such as XXL Magazine, The Source as well our favorite Canadian music channel MuchMusic. To say the least, Harvey Stripes has made a name for himself and now its time for us, West Coasters, to take notice.

Who really is Harvey Stripes you ask? Harvey Stripes is a Canadian rapper that is simply “being himself” and rightfully so, it is paying off. As Stripes states about himself, he is just an, “artist that tries to keep it real”. Embracing his own unique character is what stems the creativity that Stripes feeds off of. Owning his own record label DNDMG, has allowed flexibility for Stripes to do things on his terms and have complete control of his destiny. Originally from Ottawa, where he was a member of a group named Deuce Deuce, Stripes recently moved to Toronto as a solo artist. Within the 2 years he has been in Toronto, Harvey Stripes was able to network and create a name for himself. From releasing his mix tape, shooting videos for his singles, and touring, saying Harvey Stripes is a hard worker would be an understatement in my eyes. I asked where this drive came from and Stripes sincerely responded that he, “can’t let people down”. With a quick pause he continued to mention yet ANOTHER project he is working on which is the production of his upcoming mixtape. Slipping the name of the mixtape, I could sense the excitement in his voice to just get his music out to his fans. A true testament that Stripes’ grind is continuously on his mind and what his next move is. Being quite the private person Stripes looks to music to, “vent” and allow for his creative thoughts to flow. His individualism and ability to stay true to his own sound is what has enabled Stripes to gain the respect he has been given within the industry. This sound has allowed for Stripes to work with a number of artists. I asked Stripes about some of these collaborations and how it was working with the artists. As I was speaking to Stripes, I could sense the humble nature that keeps him grounded mentioning that he was grateful for those opportunities and is trying to do the same for other coming up in the music industry. Stripes explained the sudden shift from asking to do collaborations to being asked to collaborate on singles. Not forgetting where he came from and how hard it is to make a name for oneself, Harvey Stripes is appreciative of the mark he is able to make on the Canadian music scene. From songs like “Grey Goose Diet” to his latest single “No Budget”, Stripes’ unique voice and stylistic flow makes him one to get familiar with and keep an eye on.

Being a fashion enthusiast myself, I had to ask Stripes where his style inspiration comes from. “Trues (True Religions), Louis Vuitton, and Gucci” are all lables that rolled off of Harvey Stripes’ tongue as I asked this question but, it was with the simple statement “I like shiny things”, that I was a little taken aback. As Stripes continued to explain where his style stems from I began to understand more. He stated that he wanted to show what he had worked for and there was a time when these pieces were not attainable for him. May it be creating a statement in a crisp all white suite with a standout plaid button down in the “Come On” video featuring Lloyd to rocking a classic fitted cap with a white henley and Canada Goose Down vest, Stripes is always confident in his style. This confidence shines through not only in his fashion sense but is also represented through his music. Stripes is proud of the benefits from his hard work and wants to show it. Mind you, all of this is coming from the guy who recently gave out a REAL Louis Vuitton bag to a female audience member at a Toronto show while also throwing money into the crowd. So, needless to say, Stripes isn’t taking his good fortune for granted but recognizing where his success is coming from, his fans.

If you haven’t already gotten your ticket to tonight’s “Hustlerz Ambition Tour” to check out Harvey Stripes, chances are your probably not gonna get one because the show is SOLD OUT. Fret not though, this is what YouTube is for… nevermind! You’re going to miss out on a pretty epic show tonight, who am I kidding, its Harvey Stripes! But, on the positive side, you are now one step ahead of the Hip Hop game in Vancouver and have a new party anthem in the song “Grey Goose Diet” by the one and only Harvey Stripes. 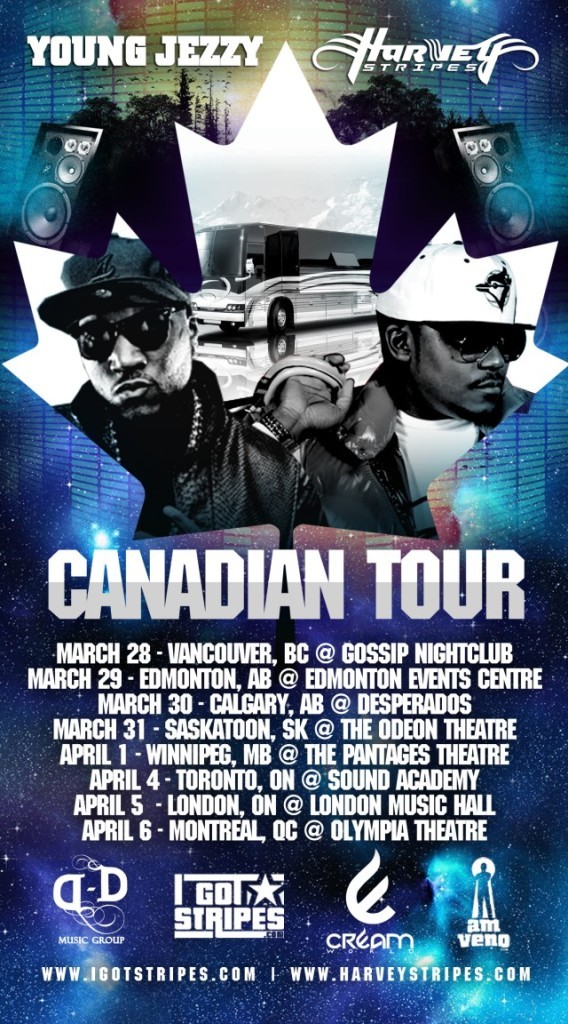