Vancouver actress Katharine Isabelle is widely recognized for her starring role in the 2000 cult classic, Ginger Snaps (and its sequel).

She has won a Gemini Award for Best Supporting Actress in a mini-series for “The Englishman’s Boy”, and has been in numerous projects including; Primary, Random Acts of Romance, “The Good Wife”, “Dark Universe”, “Motive” and recurring roles in “End Game” and “Supernatural.”

Notably, Katharine appeared in Freddy Vs. Jason and is thrilled to be a part of Lawrence & Hollman as the capricious Zooey.

I had the pleasure of interviewing the talented actress, we talk future projects, leisure time, and of course, her new feature film “The Movie out Here”.

Felix: “The Movie out Here” is a hilarious comedy set in British Columbia. Tell us a little more about the movie.

Katharine: It’s a charming comedy about buddies trying to help a friend. It’s about friendship really – and a Sasquatch.

Felix: I understand that most of the cast are BC actors as well. What was it like filming in your home province alongside fellow BC actors? What was the dynamic like on set?

Katharine: It was great! Fernie is the most beautiful town. Everyone was so welcoming and supportive. The film really showcases the outdoor beauty of the province.

Felix: In the film you play Danielle, tell us more about your character? Did playing Danielle come naturally to you? Or are you in no way one of the same in any way? 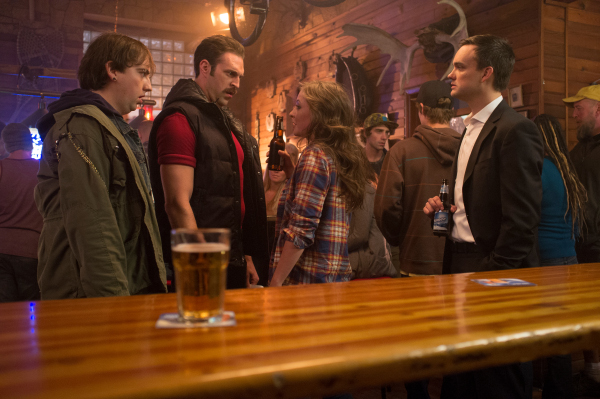 Katharine: Danielle (pictured above) is a glaciologist. I’m not in real life. She’s a local Fernie resident who joins the gang of friends in their quest to help. And – don’t worry – I didn’t have to learn all about glaciers

Katharine: Every film is selected based on its own merit. I don’t have a particular genre I prefer. I just prefer good scripts – with good characters.

Felix: You were on an episode of MacGyver, and despite what you might have thought back then, for people like you and me at our age, MacGyver is now a cult classic. Do you every just throw that into a conversation with your friends, like “Hey, I was on MacGyver, I got this”, and then make shift something to get away from Paparazzi?

Katharine: Yes, constantly. With my experience on “MacGyver” and a roll of duct tape, I can pretty much do anything.

Katharine: I have horses out in Langley that I spend as much time with as I can when I am in town. I was the first among my friends to get a dog. They all followed suit so now we all hang out with our dogs in Vancouver. Walking the seawall is great because my dog – Spaghetti – thinks he’s the captain of all of the little boats on the water.

Felix: Are you currently working on other projects? Anything interesting coming our way?

Katharine: Yes. I’m currently on a tour – the UK, the US and Canada – festivals and theatrical launches for “American Mary.” It’s a brilliant psychological thriller written and directed by Jen and Sylvia Soska – fantastic twin’s sisters from Vancouver. It’s a dark story about a young medical student who explores the underground world of body modification. It’s being distributed by Anchor Bay in Canada in the next year and it’s really cool. It’s won a bunch of awards already in LA and Toronto and Boston and London. The twins are so smart and creative. You have to see it!

Felix: Being a working actress from British Colombia, do you care to comment about the “Save BC” film campaigns going on right now?

Katharine: The BC film industry has raised me. I am an adamant supporter of film and television production in British Columbia. I always have and always will support BC film.

Catch Katharine Isabelle in The Movie out Here, in theatres this Friday March 1st — and don’t forget to check out our contest for your chance to win tickets to the film and hang with the cast.

By Felix Kay,
Hang with Felix on Twitter: @TheFelixKay