“Grave Encounters” told the story of a group of reality television hosts that travel the country in search of supernatural activity. Now Sean Rogerson is back in “Grave Encounters 2” — where he reprises his leading role as Lance Preston, ghost hunter.

Lance Preston, head of the film’s ghost hunting team left responsible for shooting an episode inside an abandoned Collingwood Hospital, where unexplained phenomenon had been reported for years. “Grave Encounters”, Sean’s first leading film role, showcased his acting chops, and the movie as a whole helped reinvigorate the horror sub-genre with a clever, well shot and genuinely creepy haunted house tale.

Before breaking into the film industry, Sean was born and raised in Edmonton, Alberta and worked in the oil fields before moving to Vancouver. Upon arrival, Sean made the decision to follow his passion for acting and quickly hired an agent. Beginning with commercial work, he was fortunate enough to study with greats such as Brenda Crichlow, Gina Charreli and Larry Moss (Hillary Swank’s acting coach in ‘Million Dollar Baby’ and ‘Boys Don’t Cry’).

The knowledge he received from these impressive coaches allowed him to land leading roles in a collection of television series’. Sean graced television screens on “Supernatural”, “Smallville”, and “Psych”. Other television projects include “Sanctuary”, “Fringe”, and the feature film “Underworld Evolution”. 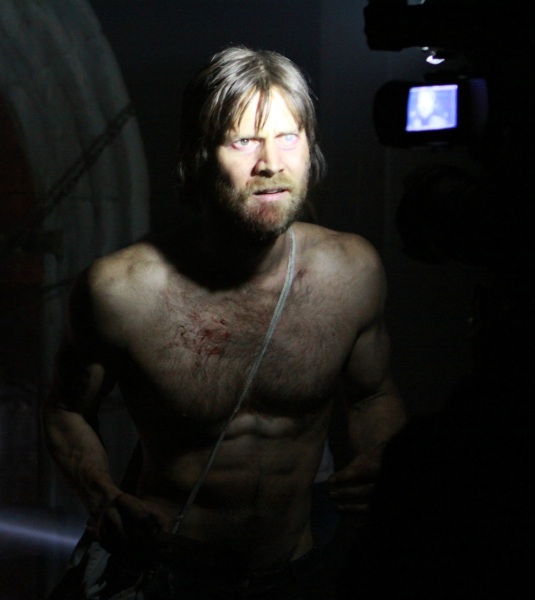 Just in time for Halloween, I had the pleasure of speaking with Sean about reprising his role in  Grave Encounters 2, and more.

Felix: Lance Preston is back in Grave Encounters 2, tell us more about him, has he learned anything since the first time?

Sean: Lance is a hard working guy just out to make a buck anyway he can. I think in the real world he is like most of us, just trying to be a success in whatever capacity he can create. I think since the first film Lance has learned to survive and to do so he has stopped provoking the spirits of the Collingwood Hospital….oh and has a healthy appetite for rats.

Felix: When filming a horror film such as Grave Encounters 1 and 2, do you ever lose yourself in the film and start to believe what is happening is real? Do you ever get nightmares, or legitimately “freaked out”?

Sean: The only thing I found real about the first film was how tired we all were from running around and screaming for so many days. I can’t say I took too much home with me, except on the second one I did have a beard and hair extensions. They both came home with me each night and I did have nightmares about them!

Felix: Do you prefer to work in film, or in television?

Sean: I prefer film because you are given a lot more time to play. Film is never as rushed along as TV. As far as the parts available I find no difference. There are great parts to play in both.

Felix: When you’re in between projects, what kind of things can we find you doing? Hobbies? Activates?

Sean: I spend a lot of time with my fiancé and dog. We like to get out of town as much as possible even if it’s for a day. We travel very well together and love road trips. As far as hobbies go I like jogging and have started learning Spanish and hope to be fluent in a week…. Maybe longer.

I think it would be cool to work with Guy Richie. His films seem like they would be a total blast to work on.

Sean: Well, I am from a place called Sherwood Park…Outside of Edmonton. So Oilers it is.

Felix: Are there any projects you are currently working on? What can we expect to see you in down the road?

Sean: Right now I am working on a film called 12 Rounds Reloaded playing a younger (ish) Detective on the hunt for a man (Randy Orton). I have become a detective fairly quick through some shifty means. It all comes out in the wash though and maybe a few explosions.

Felix: What was your most challenging role?

Sean: I did an episode of a show called Blood Ties. I played a man (Charles) who turns himself in for a murder he believes he committed. It ends up that because of experimentation during childhood him and his two brothers are psychically linked. He sees what they do until they die and they all become one.

Felix: Last but not least, where would you like to see yourself 5-years from now?

Sean: The only thing missing now is a little sunshine and surf. I would like to be a dad living in San Diego with my wife and still be doing what I love.