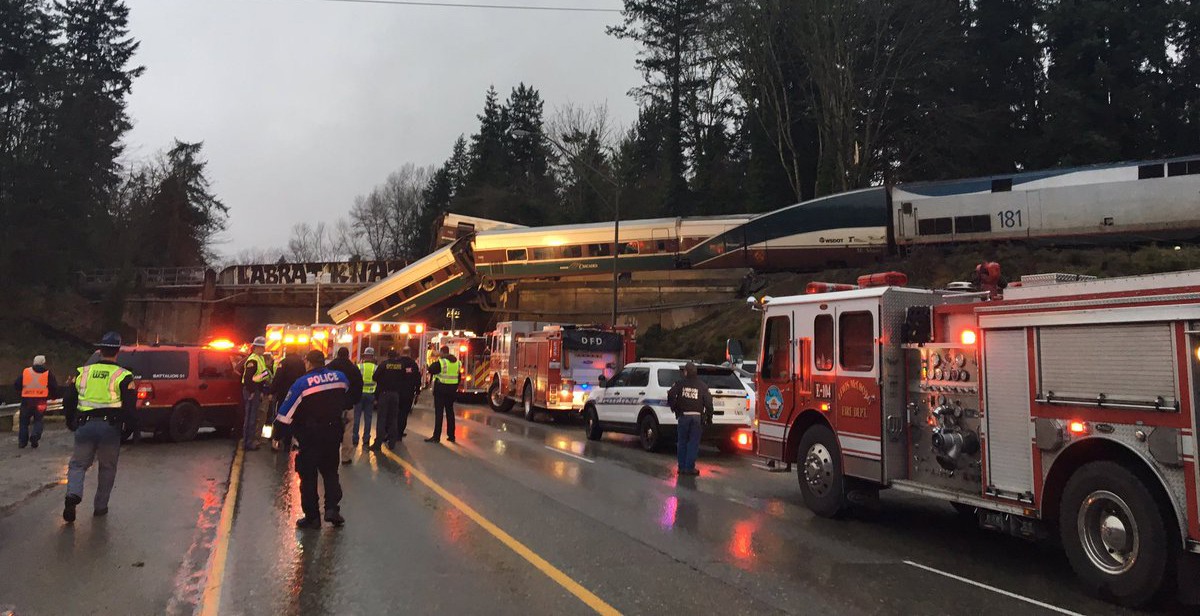 Editor’s Note: This story is now being updated here, after multiple fatalities were confirmed. Please check that link for updates.

An Amtrak Cascades train has derailed onto the I-5 highway in Washington State while travelling between Seattle and Portland.

Washington state Governor Jay Inslee has declared a state of emergency, after 13 train cars and two engines derailed, hitting vehicles on the freeway below.

Inslee has just visited the site of the derailment to meet with first responders, family members and passengers.

I’m on the scene in DuPont with Pierce County Executive Dammeier and @wastatepatrol Chief Batiste and @wsdot officials. pic.twitter.com/vKsIgSYAKk

According to a statement from Amtrak, the train was believed to be carrying around 78 passengers and five crew members.

MultiCare hospitals, which is treating those injured in the derailment, say on Twitter there are 22 people being cared for at three different hospitals around Tacoma.

In a statement on Twitter, Amtrak President and co-CEO Richard Anderson said:

“On behalf of everyone at Amtrak, we are deeply saddened by all that has happened today. We will do everything in our power to support our passengers and crew and their families.”

The train derailed south of Tacoma, in Du Pont, as it was travelling towards Portland on Monday morning. It had left Seattle at 6 am.

First up close images of scene coming from @wspd1pio Trooper Bova, this is heartbreaking to see. Our thoughts & prayers to everyone involved. pic.twitter.com/ws460sjWRo

Today’s tragic incident in Pierce County is a serious and ongoing emergency. Trudi and I are holding in our hearts everyone on board, and are praying for the many injured.

The Pierce County Sheriff stated on Twitter that several cars on the I-5 were hit by the train, leaving multiple drivers injured, although not fatally.

Several cars on I5 struck by derailed Amtrak train cars. Multiple motorists injured on roadway, no fatalities of motorists reported.

The Cascades trains often begin their journey in Vancouver, however, this was a new daily train that only shuttled between Seattle and Portland.

“Today’s tragic derailment… has significantly impacted the lives of many this morning,” said the statement.

“Our thoughts and prayers go out to the victims of this event and their families.”

The statement said the train will be removed from the highway as soon as emergency response was complete, but they estimate this will be a length process.

Trains from Seattle to Vancouver are continuing to operate, but if you’re driving down the I-5 be ready for delays, diversions, and closures.

According to WSDOT, 60,000 people use that affected section of the southbound I-5 every day, and they do not know when it will reopen.

60k use this area of SB I-5 each day.
– We don’t know when it will reopen
– Expect major delays on alternative routes especially this p.m.
– If you use an alternative route, please use extreme caution.
– New wrecks will make a bad situation worse. #I5MountsTrain