Alton Brown has done many things in his accomplished food and entertainment career, but he’s never been to Vancouver. The “Good Eats” and “Cutthroat Kitchen” star will tick that milestone off his list on February 20, when his stage show, “Alton Brown Live: The Edible Inevitable Tour” makes its Canadian debut at Vancouver’s Orpheum Theatre.

Brown took some time while on tour in Florida to talk to Vancity Buzz about his “dangerous” live show, the state of food as entertainment today, and some of his favourite things to eat.

Fans of “Good Eats,” and “Iron Chef America,” will know Brown for his almost encyclopedic knowledge about food, from molecules to main courses, so it’s no surprise that “Alton Brown Live” features in part on the science of food, with a big serving of humour. But Brown cautions, what happens on stage is most definitely not ‘As Seen on TV.’

“I actually say at the very start of the show that everything I do [in the show] are things people won’t let me do on TV,” explains Brown. 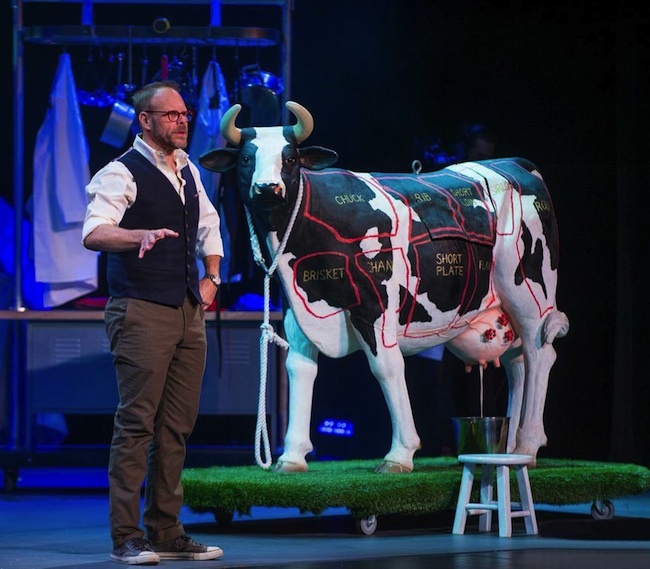 While he won’t reveal the specifics of what kind of near-trouble he gets in to (and stay off the Google if you don’t want spoilers), Brown says that his show is a mix of things producers weren’t interested in letting him do, like “rant and rave on subjects,” sing food songs, show “puppets doing things most people don’t want to see on TV,” and conduct “two very large and dangerous culinary demonstrations” with the help of audience volunteers.

Brown quickly points out the danger is somewhat relative, in that these two demos, which involve “extreme cold and extreme heat,” respectively, in that it is “only really dangerous to me and whoever the poor sap is who volunteers to be with me” onstage.

Pulling someone up out of the audience to lend a hand is just one of the myriad of ways Brown is using his stage show to further interact with fans. Though his onscreen demeanour on shows like “The Next Food Network Star,” may lend the impression Brown is a daunting figure, he says he doesn’t think people are really awed by him.

“I just figured they were blowing smoke,” Brown posits. Instead, on platforms like Twitter, and in the earlier days of his popular podcast, “The Alton Browncast,” Brown has spent a lot of time not just interacting with fans and fellow food lovers, but giving them help with their kitchen quandaries.

The advice-giving part of the gig is important to Brown, and he takes it seriously. “I try to make sure that I give correct answers to things, and I try to be sensitive to people’s feelings when I give opinions. I don’t want to be a polarizing personality; I try not to be snarky, and I try to be honest–people can tell when you’re lying,” he explains.

Even on Twitter it’s hard to read tone, though it’s hard not to smile at Brown’s quirky signature tweet-style of posting photos of sticky notes he’s written on–a funny choice given Brown’s fast fingers. “In this day and age there’s nothing that replaces direct interact with fans like social media. [Twitter] is fun for me because I type fast.”

With the incredible popularity of competition cooking shows and the cult of culinary celebrity, Brown is one of the many personalities who is part of what has become a culture of food-as-entertainment, and it can be a precarious position. Not only does he need to make sure he’s getting home cooks the right info for recipes, but he also has a role in shaping the future of food in society.

Brown says he does worry about the emphasis TV places now on reality and competition food programming. “Food as spectacle can put food into the wrong place in people’s lives,” observes Brown. “Those of us in food media need to work hard to be balanced.”

With the shift in food programming towards less instruction, it’s no wonder Brown is making a home for himself on the stage, and is looking to more innovative spaces like the internet for where his next projects will be. 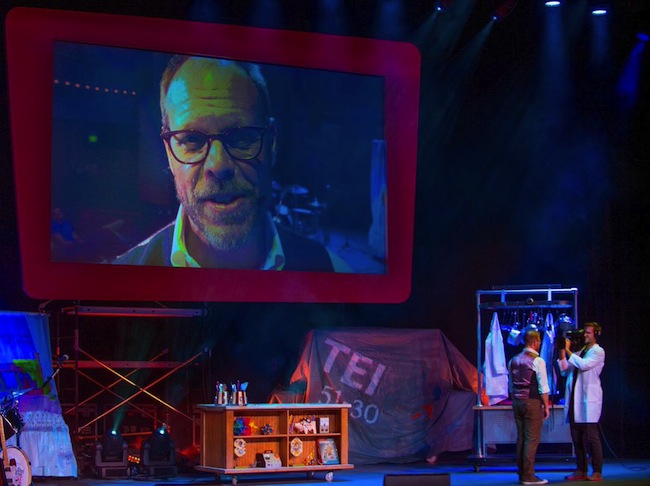 A more immediate project is planning where to eat when his show hits town. Brown has been getting locals to chime in online with recommendations for where Brown should eat when he’s in their town. Using the hashtag #ABRoadEats (and #ABRoadEatsVancouver) Brown has been collecting suggestions for doughnuts and diners and coffee and can’t-miss eats for every stop along the tour.

So where is he going to eat in Vancouver? Damned if he wouldn’t divulge. Brown says he prefers to show up at places unannounced, rather than tip people off about where he’s going to be. Will he hit up Phnom Penh for their phenom chicken wings? Will he get a taste of Vancouver’s doughnuts from Cartems, or Lucky’s, or Lee’s? We’ll have to keep our eyes on his Twitter, Facebook, and Instagram to find out.

We asked Brown a few more food questions for the road:

Vancity Buzz: What do you like to eat before a show?
Brown: As little as possible. A full tummy makes me dumb. I gain weight very easily. I could mow through a dozen donuts.

What do you crave immediately after a show?
A good stiff cocktail. But I usually don’t get it, because I have to do culinary prep after the show.

What’s your “guilty pleasure” food?
Hummus. I eat a lot of hummus. I know that doesn’t sound like a guilty pleasure, but it is in the amounts I eat of it.

How do you take your bourbon?
Neat.

What would be your “last supper” if you could pick it?
Hopefully something that takes a really long time to make. Duck confit. It takes three days to make it.