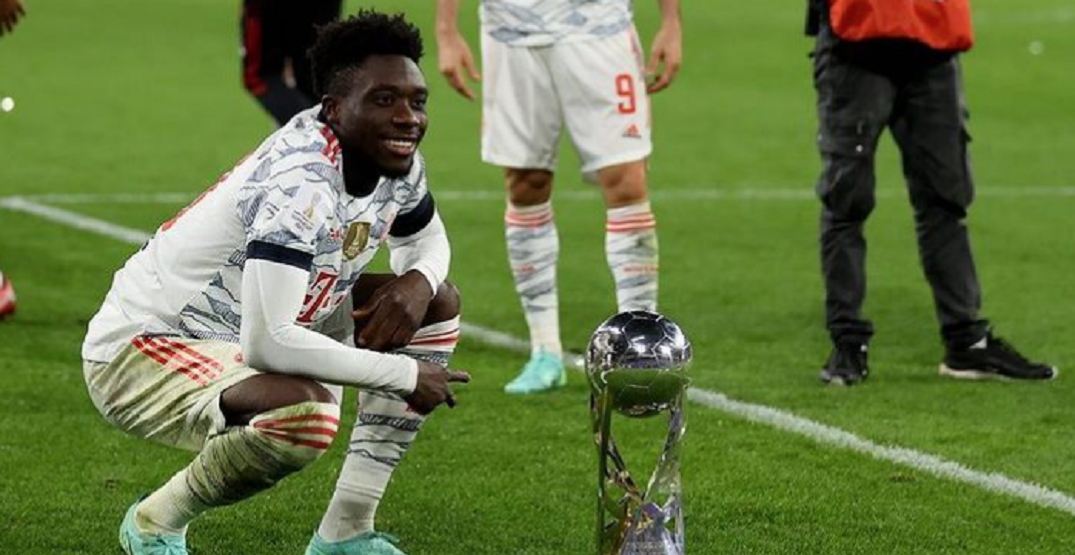 At just age 20, Bayern Munich left-back Alphonso Davies is arguably the most accomplished Canadian male soccer player of all time.

The Ghanaian-born soccer player, who grew up in Edmonton before spending parts of four years with the Vancouver Whitecaps, Davies has been on quite the tear since joining German side Bayern Munich back in 2018.

Making the FIFA World XI roster in 2020, which recognizes a worldwide all-star team, there’s no doubting the type of talent that Davies has.

And kicking off his 2021-22 season with a bang yesterday by winning the 2021 DFB-Supercup, Davies is now already up to ten trophies since transferring to Germany.

Here’s how Davies won them all:

Davies has won the Bundesliga in each of the three seasons that he’s been in Germany, having played 58 games over those years.

It may seem like a given that Bayern Munich wins the German domestic league every season, but you still gotta, you know, do it. Bayern Munich has won the Bundesliga nine years in a row, but this consistent dominance doesn’t come without strong play from players like Davies year in and year out.

The most prestigious domestic cup in Germany, the DFB-Pokal typically pits two heavyweight sides together in the final. Bayern beat RB Leipzig 3-0 in the 2019 final, and Bayer Leverkusen 4-2 in the 2020 final.

Bayern failed to win a third consecutive title though, being ousted in the second round by second-division side Holstein Kiel on penalties last season.

The DFL-Supercup pits the winners of the Bundesliga and the “Pokal”, as it’s informally known, and the Bundesliga. The one-off match is akin to the English Community Shield and kicks off the start of each German season.

In years where the Pokal and the Bundesliga winner are the same (hint: it’s often what happens with Bayern), they’ll play the second-place Bundesliga side from the previous year. Bayern has defeated Borussia Dortmund in each of the last two seasons in the DFL-Supercup, but lost to them in the 2019 final.

The biggest accomplishment of Davies’ career to date, Bayern topped French side Paris St-Germain in the 2020 final 1-0 in front of an empty stadium in Lisbon, Portugal. The Champions League playoff rounds were largely delayed due to the COVID-19 pandemic, but Bayern knocked off Chelsea, Barcelona, and Lyon en route to their first UEFA Champions League win in eight years.

Playing UEFA Europa League winners Sevilla in the one-off match as a result of winning the Champions League, Bayern prevailed 2-1 at Puskás Aréna, in Budapest, Hungary. A goal in the 104th minute by Javi Martínez gave Bayern the win over Sevilla, who had previously played in the Super Cup five times but have still won only once.

The most logistically hectic of Davies’ trophies, Bayern won the 2020 FIFA Club World Cup in a tournament that actually took place in February 2021 after COVID-19 related disruptions. Bayern beat Mexican team Tigres UANL in the final of the six-team tournament, which took place in Doha, Qatar.

The sixth of Bayern’s trophies in 2020 (sort of), Bayern completed what’s known as the sextuple – winning all six trophies they had the opportunity to win in a single calendar year. 2009’s Barcelona side is the only other team to accomplish the feat.