The Alex Fraser Bridge's counterflow lane will be similar to the moveable zipper-like barrier system on the Golden Gate Bridge in San Francisco. (Party Of The Third Part / YouTube screenshot)

The BC provincial government says it now plans to delay the scheduled completion of the Alex Fraser Bridge’s new counterflow lane to summer 2019.

The new lane, which involves the narrowing of the bridge deck to accommodate an additional seventh lane of traffic, was originally planned to open this spring before it was delayed for the first time to fall 2018.

However, the BC Ministry of Transportation says the delays are due to extra engineering work that is necessary for both cycling upgrades and the cable replacement process. 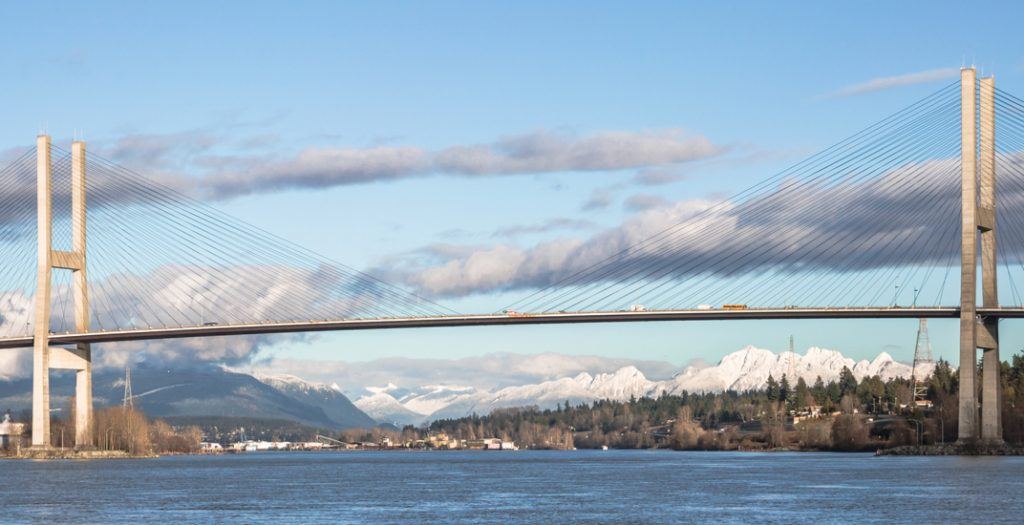 Two other crossings in the region – the Lions Gate Bridge and the George Massey Tunnel – also use counterflow lanes systems, but their lane directions are controlled by boom gates at the entrances of the crossings.

Other work as part of the $70-million project includes new traffic signals at the Nordel Way interchange and the extension of the two-lane northbound on-ramp to make it easier for vehicles to access the bridge.

These traffic signals, which alternate the merging traffic entering from two directions, will be active starting this week.

Additional work on the project this summer includes strengthening the bridge and repaving the bridge approaches, installing sign and electrical infrastructure to indicate counterflow traffic, improving cycling connections and widening sections of the bridge sidewalks, widening the Cliveden interchange to fit a new seven-lane configuration, adding a third southbound lane on Highway 91 between Nordel interchange and 72 Avenue interchange, replacing one of the 32-year-old cables, and installing a movable barrier system.

Some delays can be expected during the construction of these remaining elements.

When fully complete, it is anticipated the added capacity from the new counterflow lane and associated road improvements will reduce travel times on the route by between 12 and 16 minutes during the evening rush hour and about six minutes during the morning rush hour. However, traffic speed limits on the bridge will be reduced from 90 km/h to 70 km/h due to the narrower traffic lanes to fit in the extra counterflow-controlled lane.

Approximately 120,000 vehicles per day use the current six-lane bridge, which spans the Fraser River and connects Richmond and New Westminster with Delta.

The federal government provided $33.7 million for the project while the provincial government filled the remainder of the cost.