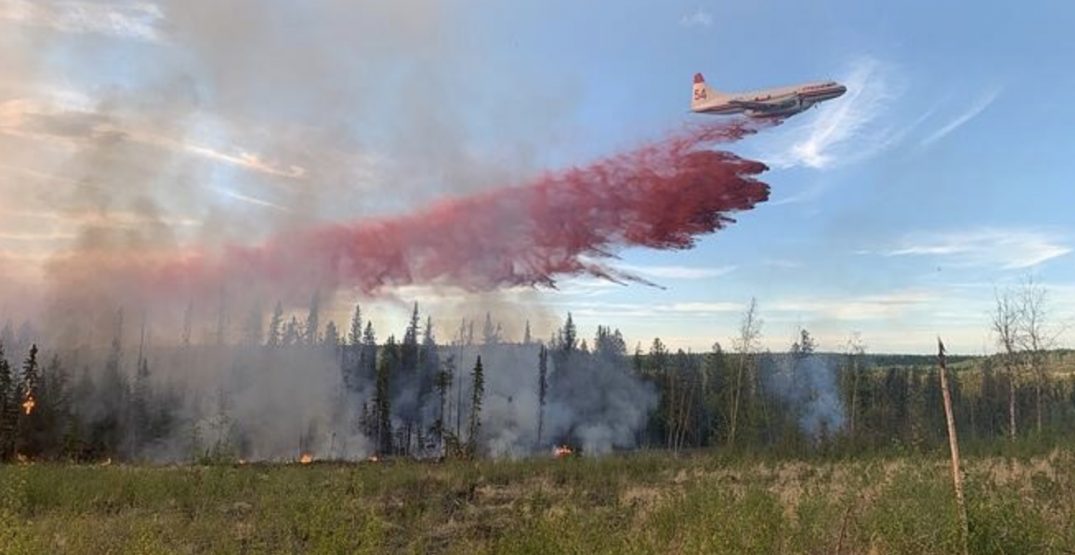 A firefighting plane working to extinguish a blaze. (Alberta Wildfire/Facebook)

A fine has been issued following a gender reveal party in Alberta that got a little out of hand when an exploding target caused a wildfire that grew to be over half the size of a CFL football field.

According to Alberta Wildfire, the party took place about 10 kilometres west of the urban service area of Fort McMurray on May 31.

Travis Fairweather, a Wildfire Information Officer with the Government of Alberta, told Daily Hive in an email that the fire was caused by an exploding target.

In the case of this target, Fairweather says that it “contained a coloured substance which would also be visible as part of the explosion, giving off a blue or pink plume of smoke or powder to indicate the gender of the baby to those in attendance.”

The Wildfire Information Officer explains that exploding targets are detonated when shot, most commonly with the round of a gun.

This type of explosion can spread smouldering debris into the surrounding grass or trees, igniting a wildfire, which was the case at this gender reveal party.

The blaze grew to be 0.43 hectares in size – which is over half the size of a Canadian Football League field.

Alberta Wildfire dispatched 10 wildland firefighters and support staff to extinguish the flames, along with firefighters from the local municipality.

Fairweather says that the person who was deemed responsible for this wildfire has been issued a $600 fine, noting that the individual has the opportunity to dispute the charge in court if they choose.

According to the officer, this is a standard fine for a violation of the Forest Prairie Protection Act. Although the maximum fine is $600, a person may also be charged for the cost of fighting the wildfire. Fairweather added that, when this is the case, it could certainly become a much higher amount, depending on the resources deployed and the time it takes to extinguish the wildfire.

Alberta Wildfire says that this is the third wildfire that has been unintentionally started by an exploding target this year.

“These other cases weren’t necessarily during a gender reveal, but they were using a similar device,” said Fairweather.

In 2021, 76% of wildfires have been human-caused, with several still under investigation. Last year, 88% of all wildfires were human-caused. Fairweather noted that both of these numbers are well above the five-year average of 68%.

Alberta Wildfire’s goal is always to first educate people about the ways that humans can cause wildfires. The organization has a number of public awareness campaigns centred around abandoned campfires, off-highway vehicle use, fireworks, exploding targets, and more.

In 2017, Alberta Wildfire was able to amend the Forest Prairie Protection Act to include fines, and these fines were increased in 2020. Additionally, the Act now requires people to have written permission from a forest officer to be able to use exploding targets within the Forest Protection Area of Alberta.

It’s important to note that fire permits are required for any burning other than campfires in Alberta’s Forest Protection Area from March 1 to October 31 every year.