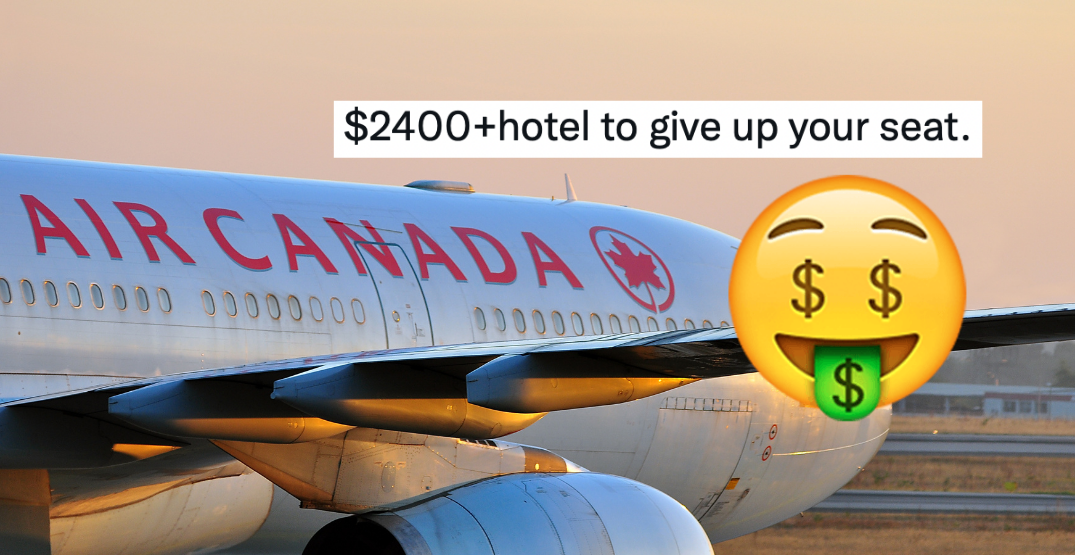 If Air Canada oversold your flight and offered you thousands of dollars to give up your seat, would you take the cash?

According to one traveller, the airline reportedly offered $2,400, plus hotel expenses, to passengers on an oversold flight.

Andrea Traynor tweeted about her travel experience in Canada on the long weekend and said that an Air Canada flight from Toronto to Vancouver was oversold and passengers were offered a deal: give up your seat for cash and hotel.

Adding my personal experience so far at @TorontoPearson:

Checking in online & having NEXUS key. Don’t check bags unless you MUST.

Earlier YVR @AirCanada flight oversold; offer of $2400+hotel to give up your seat. #yyz

Daily Hive has reached out to Air Canada and Traynor for more information and will update this story.

Recently, Delta Air Lines in the US reportedly offered $10,000 for volunteers to give up their seats on a flight from Grand Rapids

In Canada, Air Passenger Protection Regulations states, “If you are denied boarding, your flight is cancelled or delayed for at least two hours, or your baggage is lost or damaged, you may be entitled to certain standards of treatment and compensation.”

The Canadian Transportation Agency has a guide to flight delays and cancellations and details what compensation passengers are entitled to. Under the current rules, large airlines must pay $1,000 if the passenger arrives nine or more hours late.

There will be new refund requirements to help Canadians get compensation from airlines that are set to go into effect on September 8, 2022.