You know that scene in Jurassic Park, where they’re explaining how they brought dinosaurs back to life? How they took the DNA strands they could recover and had a good idea of how things worked, but were missing some key parts so they just filled the rest in with frog DNA?

That’s pretty much how sports worked before advanced stats came along. People would discuss and debate sports, using good examples, and their own observations, but if they ran into a situation they couldn’t quite explain, they just simply filled it in with frog DNA (ie. “intangibles”).

Don’t get me wrong, I am not judging this approach. It’s human nature to sort of “yadda yadda yadda” your way through life sometimes, especially in the sporting world where not knowing enough information is likely to get you thrown from the tribe and possibly beaten to death.

The sporting world, much like the comic world, can be incredibly barbaric towards its own kind for some reason. If you aren’t constantly proving you have enough knowledge to “belong” to the club, then you risk alienation in some parts. This is what can often times lead people towards filling in the blanks and talking on certain subjects with an authority they probably shouldn’t.

“Yeah, sure, Datsyuk is great defensively, but I feel Toews is better overall.”

Sports writers aren’t immune from this as well, I would imagine. I find it hard pressed to believe that sports writers in the 80s were up all night, finding a way to watch games from the west coast, just so they could have an informed opinion when it came time to vote for the NHL Awards. More likely, they simply voted with what they knew (hence the east coast bias accusations) and then filled in the rest of their votes with frog DNA. A quick look at the stats, fill in some blanks, and voila, now they had an “informed” opinion on Pavel Bure’s first 60 goal season.

The problem with that approach was that the stats back then were much more basic. Plus-minus was treated as some divine approach in how to determine if somebody was defensively responsible or not. For example, a book by Jeff Klein on the career of Mark Messier (don’t ask) states the following about a particularly bad year for Messier in ’99: “by far the most damning statistic was his minus fifteen mark, easily the worst on the team”.

Jeff mentions plus-minus a lot in the book, often times as a focal point of defensive inability. Jeff wasn’t alone in this of course, as this was something many people used to do. It was easy to fill in the blanks of players you didn’t watch very much with their plus-minus rating as a way to showcase how effective they were on the ice at both ends of the rink.

The funny thing about this was that even as kids, most people realized plus-minus was a bit of a funny stat. You would joke with your friends about getting the “plus one” if you jumped onto the ice just when a goal was scored. It was like being told Santa could deliver presents to all the kids in the world in one night. We wanted to believe it, but deep down we knew something was up, it couldn’t be that easy. “Wait a minute, so by this logic, Marek Malik was one of the best defenceman in 2004? This can’t be right.”

Fast forward to today, and we now are on the brink of the “advanced stats” revolution, if not already there. What was once openly mocked by shock jock media types like Damien Cox, has now become embraced by them. As more and more NHL clubs make advanced stats hires, less and less sneering is done by those in mainstream media (MSM).

Good thing the Leafs don't play in the CHL. The CORSI hockey league. They're doing just fine in NHL, though.

It’s not hard to see why MSM would hate advanced stats, of course. It undercuts their voice of authority and takes away from the ability to craft a narrative at will. Why take at face value a story from an MSM member about a certain player “always crumbling under pressure” when you can see an argument, with numbers readily available to anybody with some time on their hands, showing that might not be the case. 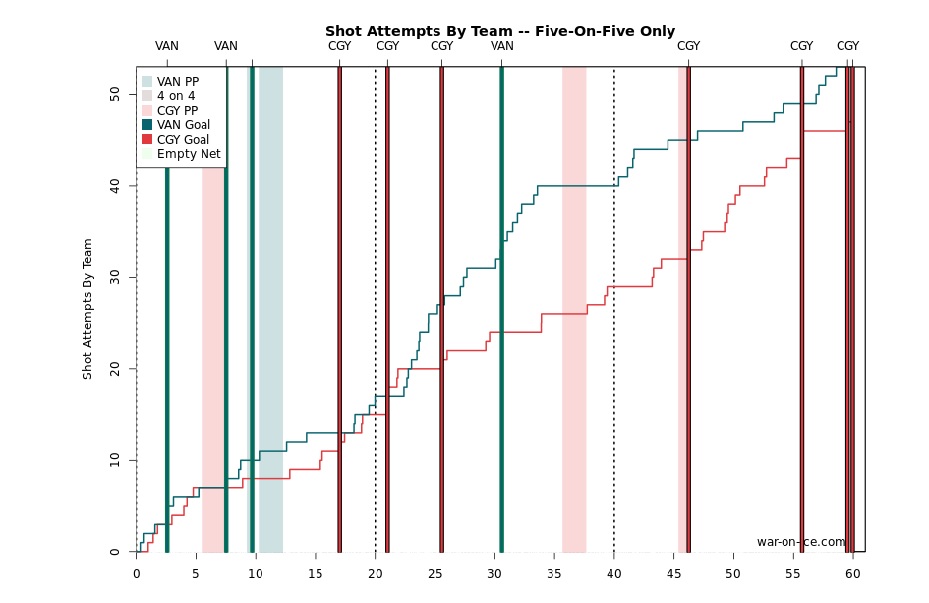 And that is what I truly appreciate about advanced stats. It gives people more options to assess a situation, with more accurate info. Instead of relying on a wonky stat like plus-minus (or by only listening to people on TV), people can dive into the world of Corsi or zone entry or try and come up with their own ways to evaluate players.

It’s next to impossible to watch every game of hockey everywhere, so of course you’ll need to fill in the blanks at times. It’s just with advanced stats you can fill in the blanks with better accuracy, so instead of dinosaurs finding a way to replicate on their own and going on to ruin your awesome park, you only end up with a missing triceratops or two. This won’t stop people using the “Corsi crutch” (people not watching the game and simply going by Corsi as the be-all and end-all stat to evaluate a game), but at least it’s closer to the truth than simply going by plus-minus. 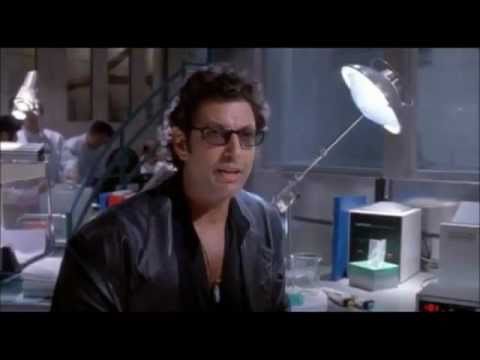 Now, I don’t think advanced stats are as accurate as they are sometimes proposed to be. I still feel they have a long way to go in breaking down hockey to the level where you possibly don’t have to watch the game to fully know what happened. As it stands now, I still feel the eye test adds a lot to our understanding of hockey. I also know advanced stats proponents are always working on being more accurate so they will keep drilling down into the numbers in order to provide better and better data.

The thing I hope advanced stats people keep in mind is that sometimes it’s fun to tell a good story in hockey. Look, hockey is an awesome thing. It is part of the Canadian identity, it is one of the top five subjects you can fall back on when small talk situations creep up in Canada. Stuck in an elevator? Mention the game last night. Even if the other person doesn’t even like hockey, they’ll nod and pretend they did. It’s glorious. Sports in general are a weird thing that can make strangers hug each other just because somebody they don’t even know, did something with a sports object.

But at the end of the day, sports are just that: sports. I don’t say that to undercut anybody’s passion of sports, I say that only to underline the point that we are not dealing with something that will decide the future of humanity (unless Space Jam was a documentary like I’ve always feared). In other words, sometimes it’s ok to use some frog DNA in hockey. 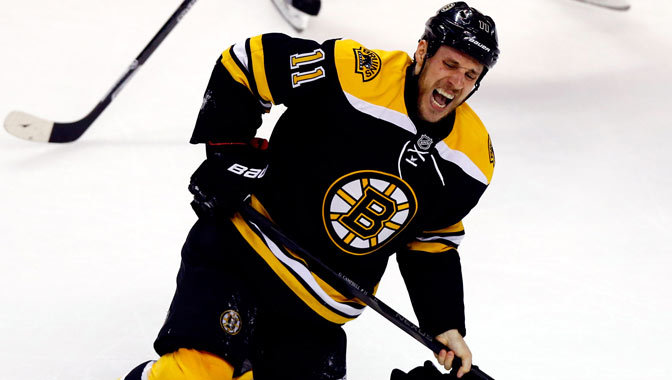 What I mean is, if Gregory Campbell goes out on the ice, breaks his leg, and finishes his shift, it’s ok to think that’s badass. We don’t particularly need somebody to scream at us that in fact, Gregory Campbell played like human garbage after his leg broke, hurt his team’s chances, and he’s an idiot for risking further injury. Sometimes we just want to enjoy a dude for doing something that we might not have been able to do.

If a player scores five overtime goals in the playoffs en route to a Stanley Cup, it’s ok for people to call him clutch. Let people enjoy the fact somebody did something special in the playoffs. We don’t particularly need to hear about his shooting percentage being unsustainable with an accompanying lengthy document outlining how “clutch” isn’t even a thing.

Sometimes it’s ok to enjoy a player and not want to read a 10,000 word length article, complete with several unreadable graphs, telling you you’re wrong.

When you’re five and see someone score a hat trick, your first thought most likely isn’t “I wonder how I can extrapolate this data and figure out if this scoring rate is sustainable”, it’s more likely “That was AWESOME!”. I am not suggesting our viewpoints as children should be maintained in all aspects of life, but again, this is sports. We love sports because it’s based on raw, primitive emotion. We are cheering on our chosen gladiators to do battle on our behalf. It’s a situation that goes hand in hand with recounting past events with a lot of gusto.

Again, I get that to some people understanding WHY something happened is far more interesting than the event itself. I just think people should remember people enjoy the games in different ways, and that doesn’t make them an idiot for not viewing it your way. Sure, if a person of authority is drilling home a narrative you think is way off base, take them down. But in every day life, if buddy in the next cubicle thinks Sbisa has “potential”, maybe just smile and nod and let it go once in a while. Sometimes the unthinkable does happen in sports, and things do go against conventional wisdom. Those are moments we should remember to celebrate, instead of simply finding a way to prove that was against the norm.

Advanced stats are good for hockey, they really are. I just hope what doesn’t get lost in the revolution is that hockey is pretty damn fun to watch sometimes.