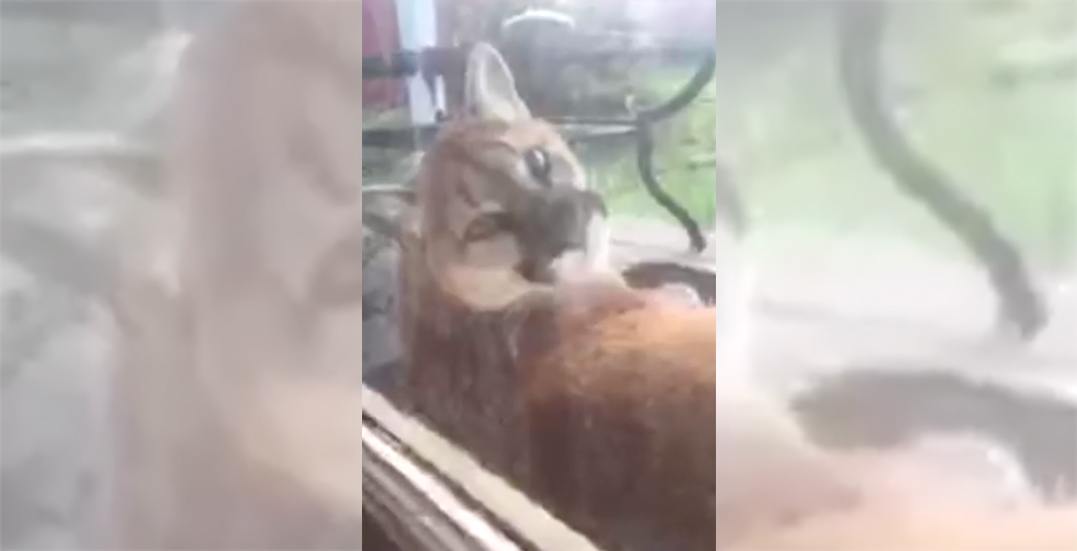 A Maple Ridge resident was paid a surprise visit when a cougar spent more than an hour lurking around his front yard.

Kevyn Helmer managed to capture much of the encounter on video and shared his experience on social media. Since the time of the incident, which took place on Sunday, December 30, 2018, the video has been viewed more than 17,000 times.

A live stream begins with Helmer’s own cat trapped inside another room, likely for its own safety.

Helmer captures the adult cougar sitting outside his front yard. Although it’s difficult to tell just how large the animal was, the feline easily takes up the brunt of his doormat.

“He’s been out here for about an hour now,” Helmer comments in the video. “I do have catnip… I’m too scared to put catnip, he might go crazy.”

During the halfway point of the video, the cougar even turns its head and notices Helmer recording. The animal nonchalantly turns back around and pays no attention.

The video ends after authorities arrive at Helmer’s front yard, finally drawing a reaction from the feline.

He later explains that the police couldn’t take the shot due to safety concerns and scared it off.

“Our cat will be an inside kitty from now on!”

David Karn of the Ministry Environment comments that conservation officers (COS) were notified of the adult cougar lying in the front yard of the home.

COS surveyed the scene but were unable to get a safe shot at the cougar, and the feline ran behind the house and into a heavily-wooded ravine. Authorities have been unable to locate the cougar around the area and fortunately, no further calls have been received to date.