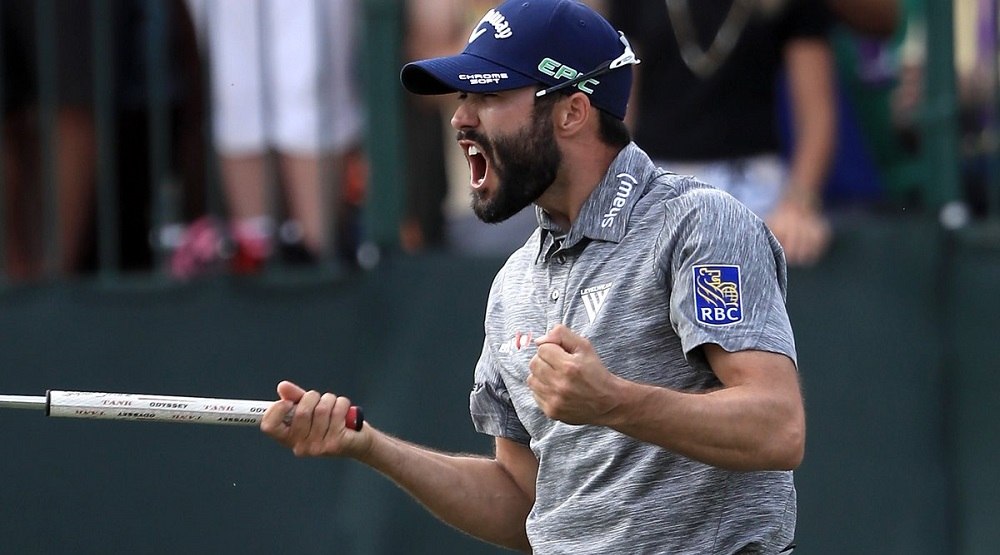 Set to get married in just two weeks time, the 29-year-old Abbotsford native hit the high point of his golfing career on Sunday.

Adam Hadwin wins the @ValsparChamp for his first victory on TOUR. pic.twitter.com/9bVybd130S

Though Hadwin entered the day with a comfortable four stroke lead, it nearly slipped away during the 16th hole when his tee shot found the water. He went on to double-bogey the hole, but was able to shake it off and finish with back-to-back pars to secure the victory.

Congratulations to Abbotsford's @ahadwingolf on winning the PGA's #ValsparChampionship today, and all the best on your upcoming wedding!

His final round of 71 from today was nothing to write home about, but fortunately Hadwin didn’t need to play perfect golf thanks to the lead he earned himself through the first three rounds.

He just needed to play smart golf, and that’s what he did.

Outside of that 16th hole, everything went soundly for the eight-year pro. After going even on the first nine Hadwin picked up birdies on the 11th and 13th holes, which proved to be crucial.

The win means a few things for Hadwin. For one, he’s over a million dollars richer, taking home US$1,134,000 in winnings.

He also moves just outside the top-50 worldwide, slotting in at No. 51 after today’s win.

Perhaps most importantly for Hadwin though, it now means he’s eligible to play in the 2017 Masters in April, on the prestigious Augusta National course.

Though that’s no doubt an exciting proposition for Hadwin, he’ll need to juggle his busy schedule to make it work.

Hadwin confirms plans to reschedule honeymoon now that he has earned first Masters bid. "I just hope I can get my deposit back."

It’s the 14th time in history a Canadian has won a PGA Tour event, and the second in the 2017 PGA Tour. Mackenzie Hughes won the RSM Classic in Georgia back in November.

It’s the first time in a decade that multiple Canadians have won an event on the same tour, dating back to when Mike Weir and Stephen Ames did it on the 2007 PGA Tour.

Hadwin now has a few days to settle down before turning his attention to the next event on tour, the Arnold Palmer Invitational starting on Thursday.