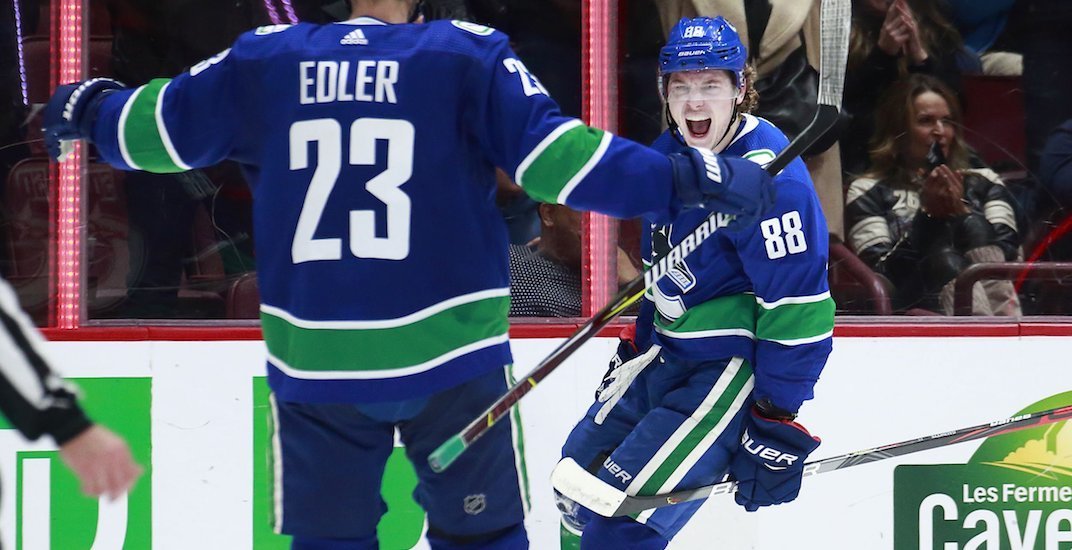 Adam Gaudette will get a look on the Vancouver Canucks’ third line this evening, in his natural centre ice position, with a pair of offensively-gifted wingers.

In short, it’s the best opportunity he could hope for heading into tonight’s home game against the Dallas Stars.

Gaudette centred a line with Sven Baertschi and JT Miller at the morning skate — a good indication that’s where he’ll end up for the game.

The Canucks are without Brandon Sutter, who Travis Green said suffered a strained groin in Tuesday’s win against Nashville and will be reevaluated in a week. Jay Beagle, who missed the last game entirely, is day-to-day. Utica call up Tyler Graovac will make his Canucks debut in Beagle’s spot on the fourth line.

But the focus will be on Gaudette, who has been as good as the Canucks could have asked for this season, but hasn’t been given much opportunity to blossom yet. He should get a run of games to prove himself now.

Gaudette forced his way onto the team in training camp, despite the fact that all four centre spots were spoken for by established players. He scored a team-leading four goals in preseason, but was a healthy scratch for six of the Canucks’ first nine games.

Green, like most NHL coaches, leaned on his veterans early on. Given the Canucks’ hot start, it was understandable that it pushed Gaudette out of the lineup until he was eventually sent to the AHL on October 24.

Injuries to other players resulted in a quick call up for Gaudette, who has produced on the score sheet with regularity ever since — though most of that production has occurred on the wing.

Gaudette scored a big goal for Vancouver on Tuesday and has to be feeling good about his game right now. The second-year pro now has five points in his last six games.

Assuming Thursday’s practice lines remain intact, this will be the first time that Green has rolled out what can best be described as a ‘modern’ third line — one that should be offensive in nature. With 19 points in 19 games, Miller is second in team scoring. And while Baertschi has just one assist in three games, he has generated scoring chances and his underlying numbers have been very good since he was recalled.

If successful, it could be a game-changer for the Canucks, who would conceivably have three scoring lines.

While the team is certainly better with Sutter and Beagle in the lineup — they’re key players on the penalty kill — neither one of them is an ideal third line centre. Sutter has five goals, but the knock on him is his on-ice vision and playmaking ability. He has just three assists so far this season, 10th-most among Canucks forwards.

Billed as a “foundation player” by Jim Benning after he acquired Sutter in 2015, the Canucks GM probably got too much heat for those words. While Sutter certainly hasn’t lived up to the hype, you can see what Benning was hoping for — a middle-six centre that can play tough minutes and special teams.

Gaudette might not be a perfect fit on the third line — though it’s time to figure that out. He’s not as young as you might think, turning 23 last month, making him just one year younger than Bo Horvat.

The challenge now for Gaudette is to not only produce offensively, but perhaps more importantly, become reliable in all three zones for his head coach. If he can gain that trust, he could be well on his way to becoming the Canucks’ third line centre on a permanent basis.

And yes, maybe even become that elusive “foundation player” for the team one day.