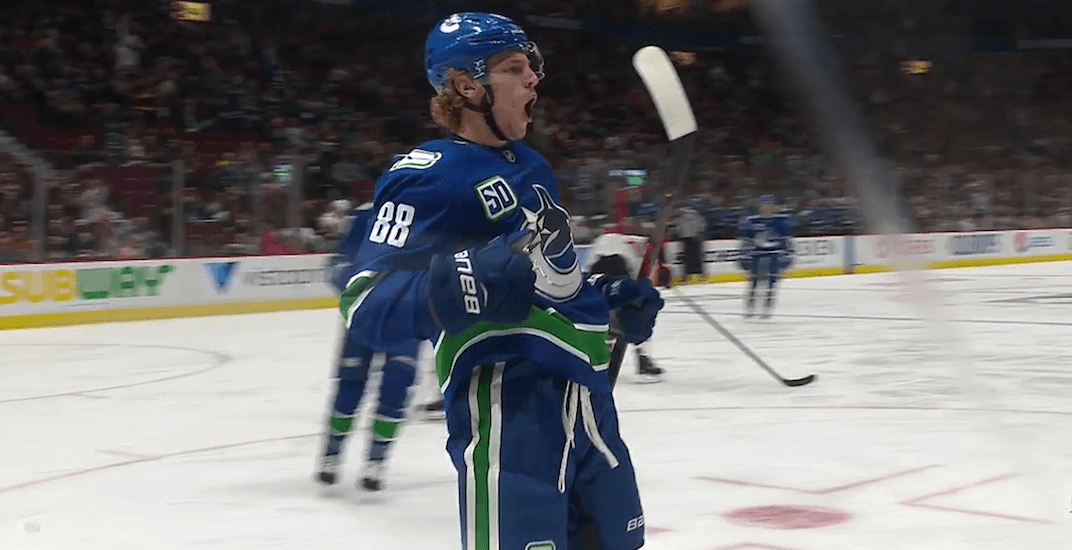 Adam Gaudette has earned a spot on the Vancouver Canucks’ opening night roster.

Yet, the question remains if the team will send him to Utica anyway.

The second-year pro has found his scoring touch in the second week of preseason and now has four goals and one assist in five games.

He opened the scoring, converting on this pass from Sven Baertschi:

More impressive than his goal was his assist, selling the fake shot before dishing to Baertschi:

“I’m doing all I can right now and I’m giving it my all,” Gaudette told reporters after the game. “I hope I’m doing enough to solidify a spot here.”

While the young centre isn’t a perfect all-around player yet, he has been one of the team’s most impressive over the last two weeks.

“What I like about Adam is he’s trying to make the team. Other guys should take notice,” Green said Saturday after his two-goal effort in Salt Lake City. “There’s a lot of competition for spots and time is running out. Guys need to make sure they play well.”

He had more good things to say about Gaudette after Wednesday’s game against Ottawa.

“He always puts an effort in and he’s here to make the team.”

So if preseason is truly a time to audition for spots, Gaudette should suit up for the Canucks on opening night next week.

Gaudette could fall victim to a numbers game.

He’s the only bubble player that’s not waiver eligible, meaning the Canucks could send him to the AHL without the risk of losing him for nothing.

This isn’t something the Canucks should get too hung up on if they truly believe Gaudette’s ready.

Nikolay Goldobin would probably get claimed on waivers — given his pedigree and the 27 points he scored in 63 games last season — but he’s almost 24 years old. He made his NHL debut nearly four years ago. This is his last chance.

Tim Schaller can kill penalties, but likely wouldn’t be claimed on waivers given his $1.9 million contract. Tyler Motte might get snapped up, but are you really going to alter your plans for a borderline NHL player with limited upside?

Because he took the (longer) college route to the NHL, Gaudette’s probably older than you think. He turns 23 in a week — so he’s far from being a raw rookie.

The biggest issue for Gaudette is the position he plays and the centres he has to supplant. Getting Gaudette into the lineup requires moving one of Brandon Sutter or Jay Beagle — two veteran centres with big contracts — to the wing. Sutter has done it before, but Green has often leaned on him as his matchup centre in the past. Does the Canucks coach view Sutter and Beagle as interchangeable? Would he move Beagle to the wing? Would he move him to the press box?

Constructing a responsible two-way checking line and identifying penalty killers isn’t usually a topic fans pay much attention to, but it’s something coaches do.

It’s why Loui Eriksson is likely to crack the opening night lineup. It’s why Schaller is being considered.

Green could send Gaudette down and wait for an injury, which history has taught us usually comes quick. That’s the patient approach, though not what the team did last season when they kept Motte over Sam Gagner.

There’s a number of ways Green can go, but for simplicity, let’s assume the following:

Given that Antoine Roussel will start on injured reserve, this leaves four forwards — Schaller, Motte, Goldobin, and Gaudette — fighting for one spot.

Not that points are everything, but Schaller, Motte, and Goldobin have combined for three points in 11 games — fewer than Gaudette has scored in less than half as many games.

Because if he does, Gaudette is here to stay.