AC/DC are set to say “g’day” to their Vancouver fans on Tuesday when their Rock Or Bust Tour storms BC Place. The Australian idols recorded their most recent album at the Warehouse Studio in Vancouver’s Gastown, working alongside local engineer Mike Fraser and Grammy Award-winning producer Brendan O’Brien, best known for his work with Bruce Springsteen.

It’s been six long years since AC/DC last played Vancouver, and as indicated by our setlist preview, the Rock & Roll Hall of Famers have an epic night in store for their head banging fans. But before they shake the stadium all night long, we’ve crunched their numbers and came up with some pretty interesting stuff. Nothing important – just some random trivia to impress your friends and annoy your co-workers with.

Rock Or Bust is the band’s first world tour without founding member Malcolm Young in the fold. Young left the band last year due to illness and was replaced by his nephew Stevie, who prefers to wear a red schoolboy uniform onstage as opposed to his uncle’s green one. Chris Slade is replacing drummer Phil Rudd on this tour while Rudd deals with a slew of legal problems in New Zealand.

After a six year hiatus, the band headlined this year’s Coachella Valley Music festival for the first time and rocked the sold out crowd with classics like “Thunderstruck” and “Hell’s Bells.” AC/DC’s killer set was a stark contrast to the EDM-heavy lineup, and lead singer Brian Johnson acknowledged that fact after just one song. “I hope you like rock and roll, cause that’s all we do,” he told the crowd to huge cheers.

Anticipation for the band’s Rock Or Bust tour has been incredibly high, especially in Europe where they managed to set a world record for the most tickets sold in the shortest timespan. The group’s 11 Australian dates have completely sold-out, as have many of their North American stops.

In 1977, Gerard Huerta designed a logo used on the band’s Let There Be Rock album. The graphic designer says the artwork was a one-off commission and Huerta still has the purchase order and invoice for his work. Since then, his image has been used countless times on album covers, posters and other merchandise (even Butthead has an AC/DC t-shirt), but Huerta hasn’t received a dime besides his initial commission fee. “It would be nice to have earned a bit on the merchandising so I can get my last kid through college,” he said.

After more than 40 years in the business, the iconic metal group has won just one Grammy out of seven nominations. “War Machine” from 2010’s Black Ice won the trophy for Best Hard Rock Performance, but the band lost the Best Rock Album prize to Green Day’s “21st Century Breakdown.” AC/DC made their Grammy performance “debut” earlier this year with a kickass version of “Highway To Hell.”

AC/DC’s latest album is also their shortest, coming in at just under 35 minutes in length. Of its 11 tracks, only three will be performed on Tuesday night (“Rock Or Bust,” “Play Ball” and “Baptism By Fire” made the cut). 1983’s Flick The Switch album is their second-shortest at a mere 37:02 in length.

For years, AC/DC refused to release their music to digital retailers in an attempt to preserve the album format, instead of allowing their fans to purchase individual tracks. The boys had a change of heart three years ago and began allowing iTunes to sell their studio albums, live tracks and rarities from previous boxed sets.

Released in 1980 as a tribute to the band’s deceased lead singer, Bon Scott, Back In Black was an immediate success and eventually became AC/DC’s best selling album by far. The disc has sold more than 50 million copies worldwide, and is the sixth-best-selling album in U.S. history (Michael Jackson’s Thriller still reigns supreme).

18 – price, in Canadian dollars, for a bottle of Back In Black Shiraz

AC/DC’s music has aged like a fine wine, so naturally it made sense for the band to delve into the beverage industry with an extensive wine and beer collection. In 2011, the guys entered the spirit world with a collection that includes a Highway To Hell Cabernet Sauvignon and a Thunderstruck Chardonnay, among others (fans can stock up on the beverages by clicking here).

There, now don’t you feel a little smarter? A few tickets are still available for Tuesday night’s show here. 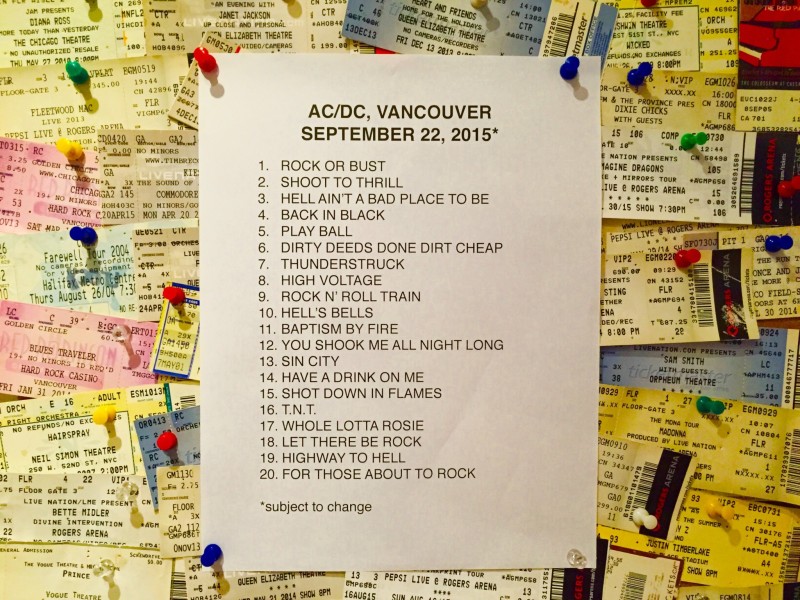