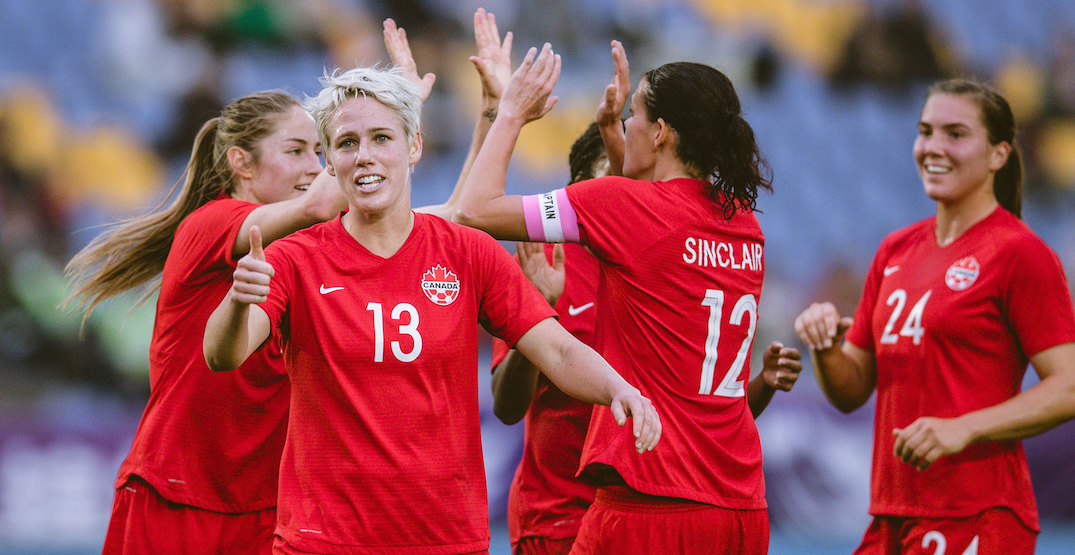 One of the most under-appreciated professional athletes from BC is zeroing in on a historic milestone.

Abbotsford’s Sophie Schmidt is set to make her 200th appearance for the Canadian women’s national team next week. After an 11-month layoff due to the pandemic, Canada will return to action on Thursday, February 18 against arch rival USA at the 2021 SheBelieves Cup in Orlando, Florida.

Schmidt made her debut for Canada on April 19, 2005 against the Netherlands. Almost 16 years later, and Schmidt is still an important piece of Canada’s midfield.

The 32-year-old has represented Canada at three Olympic Games, and four FIFA Women’s World Cups. Schmidt has scored 19 goals and added 20 assists in her 199 appearances.

Schmidt will join Christine Sinclair (296 appearances) and Diana Matheson (206 appearances) as the third member of Canada’s 200 caps club. The two-time Olympic medalist remembers how nervous she was when she stepped on the pitch for her first match.

“I think my first cap was as a centre back, and we lost,” Schmidt explained to Daily Hive earlier this week. “I remember coming in and being so grateful that I was called up. I was so scared but there were incredible humans and players around me demanding the most out of me even though I was only 16 years-old.

“I remember looking around and having Andrea Neil, Amy Walsh, Charmaine Hooper, these huge names in soccer. Not to mention Christine Sinclair, who is still playing. They paved the path for me and so many other players. That was definitely a special moment and it gave me a hunger for more.”

The graduate of W.J. Mouat Secondary has carved out a long career in a sport that’s still reaching new heights. There have been a countless number of coaches, teammates, family members, friends, and her husband, Nic who have supported Schmidt along the way.

Staying healthy and avoiding injuries has been key to her longevity with Canada. Schmidt’s durability includes an impressive streak of 76 consecutive matches played from 2011 to 2015.

“I’m not the fastest player,” Schmidt admitted. “I take care of my body, I’m not prone to injury. That adds to longevity and durability, but also hats off to the people taking care of me off the field.

“I think it’s also my adaptability. I’m able to play midfield, centre back, attacking mid, defensive mid. I’m happy to support the team and help other people come alive. I think that’s been a huge asset to my success, being adaptable and supporting players in different positions. As an individual athlete, I would not thrive, but in a team environment, it’s where I’m at my best.”

Over the years, Schmidt and her teammates have experienced the joys of hosting a home World Cup, while also taking in tough defeats against the best the sport has to offer. Schmidt’s most memorable moment representing the red and white is an accumulative journey that started after Canada finished last at the 2011 World Cup in Germany.

The hiring of John Herdman, the attitude, and confidence that Canada formed leading up to the 2012 London Olympics. The heartbreaking defeat to the U.S. in the semifinals at Old Trafford Stadium, and the resilience the team showed against France to win bronze.

These are the moments Schmidt cherishes the most.

“I think that whole year, the build up, bombing out of the World Cup,” Schmidt explained. “John coming in, that performance, team environment, and culture we created around that 2012 Olympics. The loss against the U.S. and then picking ourselves up and what that meant for Canada. I think that’s the most incredible thing that I’ve experienced as a human and as a player.”

As far as the future goes, Schmidt still has a lot of football left in her boots. She wants to continue representing club and country, including at the Tokyo Olympics this summer. In terms of what her life will look like post playing days, Schmidt knows she wants to be involved in the sport she loves in some capacity.

“I’m not sure about the length of my career,” Schmidt explained. “I’m just focused on the Olympics. I signed a two-year contract with an option of a third year with Houston, so definitely want to continue playing for a little bit. Once it’s gone, it’s gone. You can’t go back. I want to maximize that. With regards to coaching post-soccer, I’m not sure yet. I definitely want to keep that coaching avenue open. I think it’s important to give back.”