The Abbotsford Agrifair and Mighty Fraser Rodeo wrapped up recently, but not before instigating backlash from The Vancouver Humane Society (VHS) for its alleged animal cruelty practices.

The group says that rodeo events, such as calf roping, steer wrestling and chuck wagon racing, often lead to severe trauma, injury, or death of the animals involved, and are done merely for the purpose of entertainment.

Canadian animal cruelty laws do not apply to rodeo events because traditionally they are considered “generally accepted practices of animal management” in the handling of livestock. To further clarify, “livestock” is defined as animals who are used to generate a profit that are usually raised on a farm or ranch.

This means that without the protection of Federal or Provincial law, the mistreatment of rodeo animals can only be lessened by municipal bylaws, but not eliminated altogether. For any major changes to occur, rodeo organizations need to voluntarily discontinue their event, which is usually spurred by public pressure. 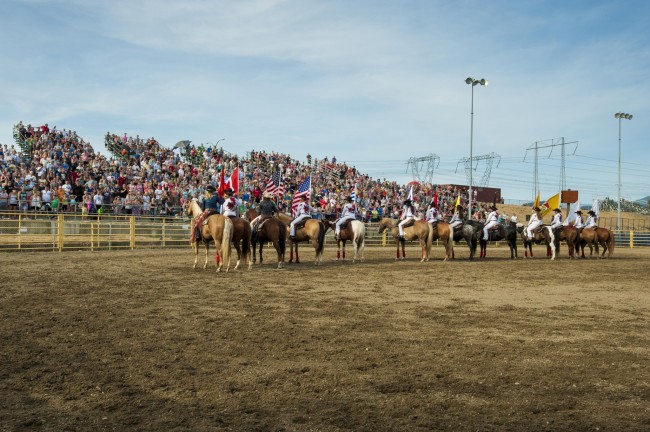 In 2006, Vancouver City Council unanimously voted to ban rodeos, making it the first major city in Canada to prohibit the event. In February of this year, the Luxton Rodeo on Vancouver Island folded after 39 years.

In 2007, The Cloverdale Rodeo and Exhibition Association (the largest rodeo in the Lower Mainland and one of the largest in Canada) discontinued several rodeo events after the death of a calf in a calf-roping event.

A poll by Insights West found that 56 percent of British Columbians are opposed to the rodeo, with only 38 percent in favor.

“However, there are enough rodeo fans to provide sufficient attendance at venues like the Agrifair,” says Peter Fricker, projects and communications director of the Vancouver Humane Society.

Fricker claims that rodeos depend on subjecting animals to fear, pain, and stress for the sake of enticing spectators. The exhilarating and physical nature of the event continues to attract crowds, as seen at Abbotsford’s recent rodeo.

Fricker adds: “In steer wrestling, the steer’s neck is deliberately twisted until it falls to the ground. In calf roping, three-month-old calves are chased across an arena at speeds up to 27 miles per hour, roped to a sudden halt, picked up and slammed to the ground.” 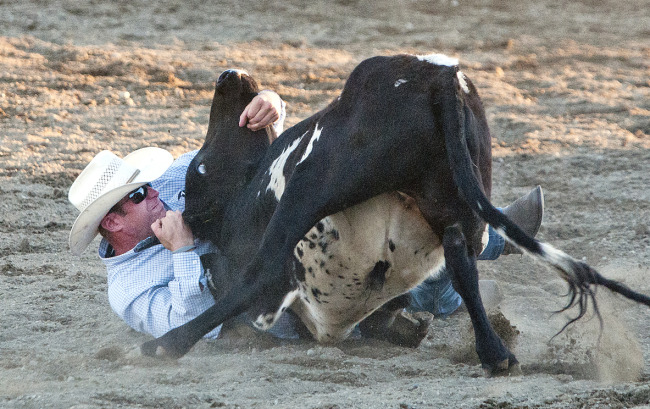 But it’s the fact that the events are timed that remains a key issue. Timed events create a more stressful situation for the animals and put them at greater risk of injury as the cowboy is hurrying against the clock.

Fricker deems these practices for the sake of amusement immoral.

“And we are not alone in this view,” he says. “The BC SPCA and most animal welfare agencies also oppose rodeo.”

However, Don Curtis, chairman of the Mighty Fraser Rodeo (MFR) says the SPCA is aware of their events and have received an open invitation to view the animals and the site at any time.

“While the animals are not owned by the Mighty Fraser Rodeo, we do have an expectation that all animals on-site receive proper care and attention by those who are responsible for their well-being,” says Curtis.

He adds that the Canadian Food Inspection Agency attended their site this year, inspected the animals and found no animal care concerns. Also, that a veterinarian is on site at all times during each rodeo performance, as well as an ambulance, to ensure the safety of all competitors, both animal and human. 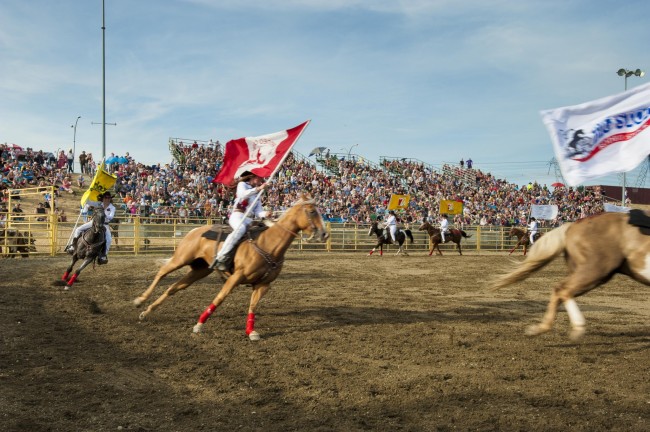 “It has been proven that less than 0.004 percent of all animals competing in professional rodeo have ever been injured,” he says.  “Our animal welfare rules and guidelines can be found on the Canadian Professional Rodeo Association website.

Rodeo is a part of a very unique lifestyle, a tradition handed down to us from our pioneering forefathers who developed the various events and evolved them into competitions of individuals and animals competing against their neighbouring ranches to see whose “outfit” had the most skilled cowhands and the best animals…We continue to be proactive in regard to the care and handling of our rodeo livestock.

Fricker argues that despite what promoters say, rodeo has little to do with genuine ranch practices. A matter of fact, steer wrestling was invented in the 1930s for the sole purpose of rodeo, and bull riding has no agricultural purpose whatsoever, he says. 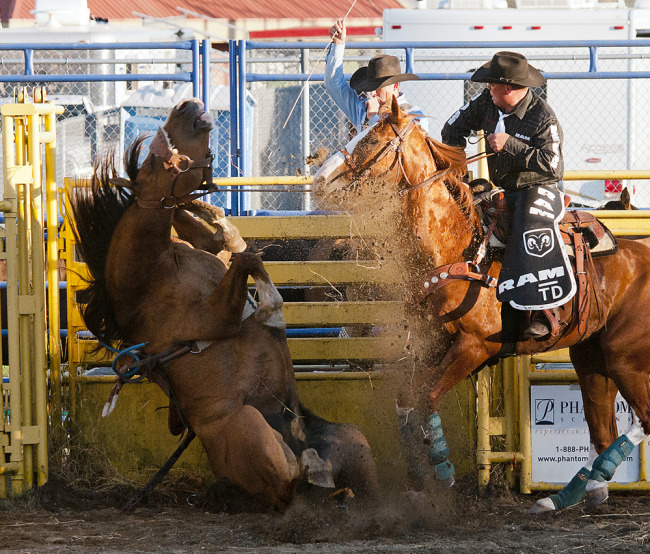 What can we tell by photos of rodeo events?

As for the photos that seemingly display a horse in distress at Abbotsford’s rodeo over the August BC Day long weekend, Curtis says it was simply in the process of standing. He explained over the phone that a frame-by-frame video would make the method a horse uses to get up look much worse than it actually is.

“Horses will use the strength in their legs, neck and shoulders to stand up,” he says. “In a video this would take mere seconds although still shots can make it an eternity.”

Pro Rodeo Announcer Al Parsons saw the photos on Facebook and offered to assist the MFR with a statement.

“I am told these very few [photos] were chosen from a group of hundreds taken at the rodeo,” says Parsons. “I would love to see some of the others as well, the ones of the wonderful well feed, healthy horses that are unable to be broke to ride, but yet our stock contractor still pays anywhere from $5,000 to $100,000 for them.”

He says the horses at the rodeo would have otherwise been sent to slaughterhouses, but instead were saved, given a name, a home and a job.

“Our western heritage has been going on for 200 years and has not changed much in the way we do things on our large ranches,” he says. “We would love to take these people on a [behind-the-scenes] tour of our ranches and rodeo, just to educate them on the truth.” 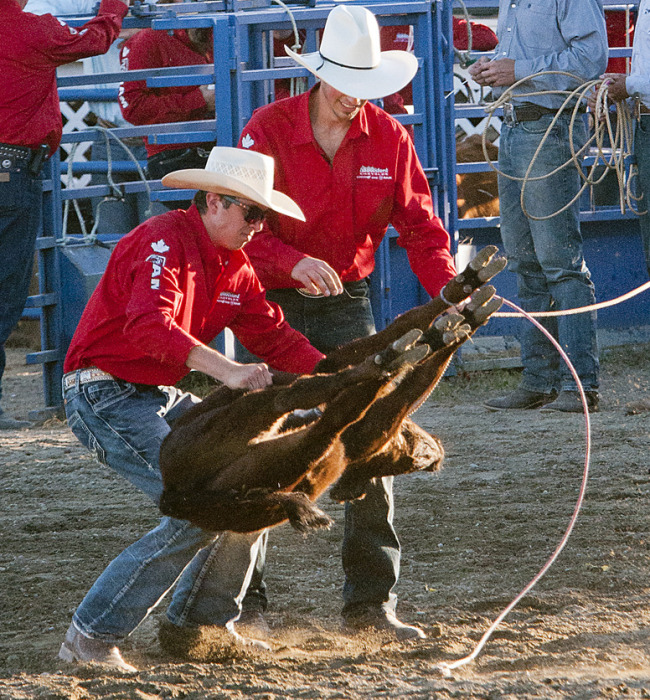 Red shirts were responsible for releasing the tied down calves (VHS)

What’s next for the Mighty Fraser Rodeo?

As far as the future of the rodeo, Curtis says it is “very well attended by the great people of the Fraser Valley, who enjoy the tradition of the western lifestyle,” adding that they will continue to support the future of Rodeo in Abbotsford.

With the rise of social media and the quick dissemination of information, videos and petitions, human compassion and action is more prominent than ever; therefore creating an ongoing dialogue on what is and isn’t appropriate when it comes to events that involve animals.

Spectators should be asking themselves if they are okay with what they’re seeing when they attend, and subsequently support the rodeo.

Is it our evolving society that is creating a tug of war between criticism and endorsement for the rodeo? Abbotsford residents have a chance to choose what side they support when the Mighty Fraser Rodeo returns next year.