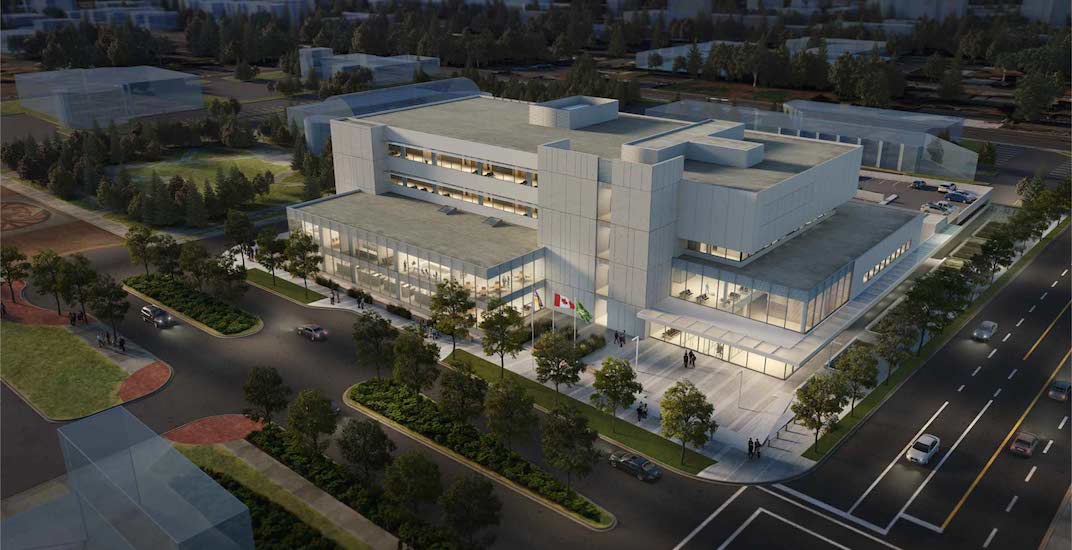 Artistic rendering of the new courthouse in Abbotsford. (WZMH Architects / Government of BC)

Construction began this week on a new courthouse building for the Fraser Valley to help accommodate the growing demand for judicial services in the region.

Designed by Toronto-based WZMH Architects, the new $152-million facility is located adjacent to Abbotsford City Hall, and it includes 14 courthouse rooms for provincial and supreme judicial processes. Additionally, there will also be judicial conference space and capacity for community justice programs.

Construction is expected to reach completion in early-2021.

This replaces the existing courthouse building at 32203 South Fraser Way, which suffers from overcrowding, security and safety issues, and a vermin infestation, according to a previous provincial government report.

Funding for the new facility is provided by the provincial government, while the municipal government is contributing a 60-year lease – worth $5.7 million – of the City-owned property.

“The City of Abbotsford is extremely grateful to the Government of BC for this significant investment in our community and region,” said Abbotsford mayor Henry Braun in a statement.

“The building of a new courthouse will create better access to our justice system, provide services and jobs to residents across the region, and help to shape Abbotsford’s evolving city centre.”

There are nine courthouse facilities in the Lower Mainland, including the main courthouse at Robson Square, the criminal courthouse in the Downtown Eastside, and other facilities in North Vancouver, Richmond, New Westminster, Surrey, Coquitlam, and Chilliwack.