Pat Quinn – known for the way he brought individuals together to acheive a common goal, for being a great leader, and for being a larger-than-life no-nonsense Irishman – was pulling invisible strings the way only he could on Tuesday night.

From the pre-game ceremony that moved onlookers to tears to the 4-1 victory over Philadelphia – the first NHL team Quinn coached – it’s clear his Irish magic won’t be leaving Vancouver anytime soon.

Having brought the house down with his rendition of Danny Boy in November, Mark Donnelly played his part true to form. Donnelly had eyes watering again, whether on couches at home or in the stands, as he sang When Irish Eyes Are Smiling.

The song was chosen perfectly as Quinn undoubtedly watched over the game. 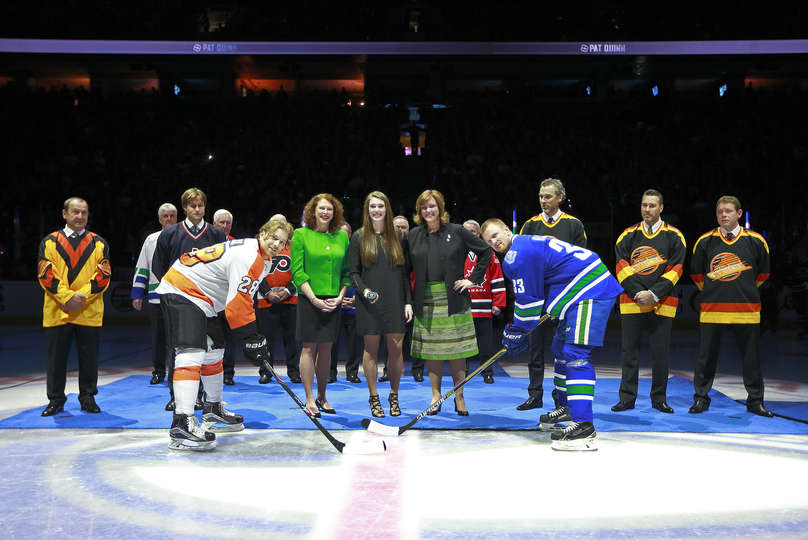 Before puck drop, Quinn orchestrated a coup, managing to bring Trevor Linden, Pavel Bure, Markus Naslund and Stan Smyl – the four Canucks who’ve had their numbers retired – to centre ice at once.

There they stood on the carpet alongside Orland Kurtenbach, Kirk McLean, Cliff Fletcher, Rick Ley, Bobby Clarke, Bob Nicholson and Quinn’s family – each having traveled from homes around the world.

“I’d fly anywhere for Pat,” Bure explained for them all on TSN 1040 radio during the first intermission.

Fans and guests came for the ceremony. They came to remember one of the greatest men in Canucks history. But unlike with Roberto Luongo’s return earlier this season, they would not have accepted a loss. The regular season’s nearly over, the points far more dire to playoff implications.

And with the game falling on St. Patrick’s day, with the luck of the Irish on their side, Vancouver’s on-ice performance was Quinn inspired too.

After allowing the first goal in the second period, the Canucks showed the resolve of a Quinn-coached team, with Alex Edler tying up the game minutes later. In the third, Alex Burrows sniped two goals within 17 seconds and Eddie Lack went into God mode, shutting the door as the Canucks sealed the deal.

You have to wonder if Burrows was inspired by seeing the Russian Rocket or Lack was putting on a show for Captain Kirk.

That could be it.

Or perhaps the entire Canucks roster was motivated to give everything they had for the mighty Quinn who would have accepted no less from any of his teams over the years.

Just as he did 20 years ago, Quinn brought together Linden and Bure and a whole host of others. And as Quinn’s troop did back then, they created magic once more.

High above Rogers Arena, the Big Irishman looked down and pulled those invisible strings. Quinn tugged at our hearts and he directed the players, and Vancouver was lucky to feel his enormous presence once more.