On Thursday, a gunman opened fire at Umpqua Community College in Oregon, killing 10 and injuring 7. The shooter is one of the 10 dead and he has been identified as 26-year-old Chris Harper Mercer. The day before the shooting, Mercer was active on the imageboard website 4chan, where he announced his plan to go through with the massacre to other online users.

In a statement, President Obama expressed his condolences to the family and friends of the victims and called for tougher gun laws in America. “Our thoughts and prayers are not enough — it’s not enough. It does not capture the heartache and grief and anger that we should feel … and does nothing to prevent this carnage from being inflicted elsewhere,” Obama said at the White House. “We collectively are answerable to those families who lose their loved ones due to our inaction.”

On Wednesday, Palestinian Authority president Mahmoud Abbas raised the Palestinian flag for the first time at the United Nations. The flag raising ceremony came after Abbas addressed the UN General Assembly, announcing that Palestine would no longer be bound to 20 years of political agreements with Israel.

“As long as Israel refuses to cease settlement activities and to release of the fourth group of Palestinian prisoners in accordance with our agreements, they leave us no choice but to insist that we will not remain the only ones committed to the implementation of these agreements,” President Abbas said in his address, according to the BBC. The motion to raise the flag was met with overwhelming support by the UN General Assembly, with 119 in favour of the decision. Eight nations, including Canada, the United States, and Israel voted against the motion.

“If Russia’s recent actions and those now ongoing reflect a genuine commitment to defeat that organization, we are prepared to welcome those efforts and find a way to deconflict our operations. But we must not and will not be confused in our fight against ISIL with support for Assad,” said U.S. Secretary of State, John Kerry.

The Russian Defense Ministry claims that the airstrikes were targeted at eight ISIS positions. U.S. Defense Secretary Ash Carter expressed his doubts over Russia’s targets. “I want to be careful about confirming information, but it does appear that they (Russian airstrikes) were in areas where there probably were not ISIL forces,” he said, according to CNN.

On Monday, NASA announced that flowing water has been discovered on Mars. The water was detected by the Mars Reconnaissance Orbiter’s imaging spectrometer. Scientists say that the salt water flows down canyons and crater walls during the planet’s warmer months, when the temperature rises higher than -23C.

5. Rio police plant gun in the hand of a boy they shot, sparking public outrage and protests 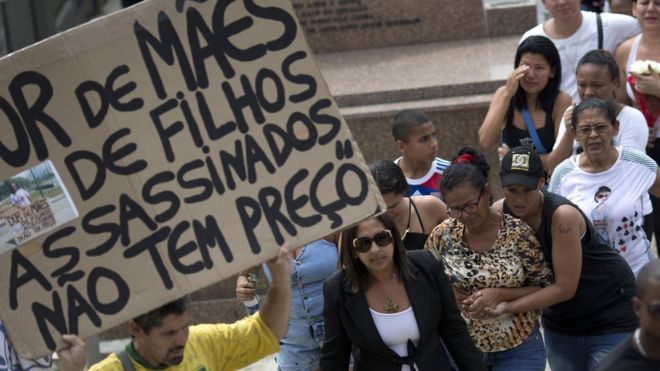 Five Rio de Janeiro policemen have been arrested after planting a gun in the hand of a boy they shot and sharing the video of the incident on social media. The footage shows an officer putting the gun in the dead boy’s hand, and firing it into the air to make it seem like he shot himself. The officers say they shot the boy in an act of self-defense. But the boy’s family and the general public are outraged by the shooting, calling it murder.

More than 300 people are reported to be injured and at least two people have been killed as a result of super typhoon Dujuan, which hit the Chinese coastal city of Putian on Tuesday. Nearly 12,000 people evacuated their homes before the storm hit. The typhoon has also left close to 1.8 million homes without power, but crews have restored electricity to 1.3 million of those residences.

7. Airstrike on wedding party in Yemin kills at least 130

On Monday, an airstrike on a wedding party in Yemen killed at least 130 people. A man associated with the Houthi rebel movement was celebrating his wedding in a village near the Red Sea port of Mocha, when the missiles hit two wedding tents. A Saudi-led coalition has been blamed for the attack, but it denies any responsibility or involvement. The coalition is pointing fingers at local militia groups for launching the missiles.

“The Secretary-General has consistently stated that there is no military solution to the conflict in Yemen. Its continuation will only bring more human suffering and destruction,” a representative for U.N. Secretary General Ban Ki Moon, announced in a statement.

On Wednesday, several large explosions went off in Liucheng county in China, killing at least seven people. The explosive devices were disclosed in parcels that were placed in 17 separate public locations around Liucheng.

The parcels exploded in shopping malls, a hospital, a prison, and a government department building. The explosions went off one day before the nation celebrated the 66th anniversary of the founding of the People’s Republic of China. According to China’s official media outlet, Xinhua News, a 33-year-old male from Liucheng county is a lead suspect in the attacks.

The new discovery of an endangered sea turtle has left scientists in awe. The hawksbill sea turtle has the ability to glow neon green and red when it is exposed to blue light. There are many biofluorescent sea creatures such as jellyfish, corals and fish, but the reptile is the first of its kind to ever show this kind of behaviour. Experts believe that the hawksbill sea turtle may not be the only type of turtle that is biofluorescent and they are on the lookout for more.