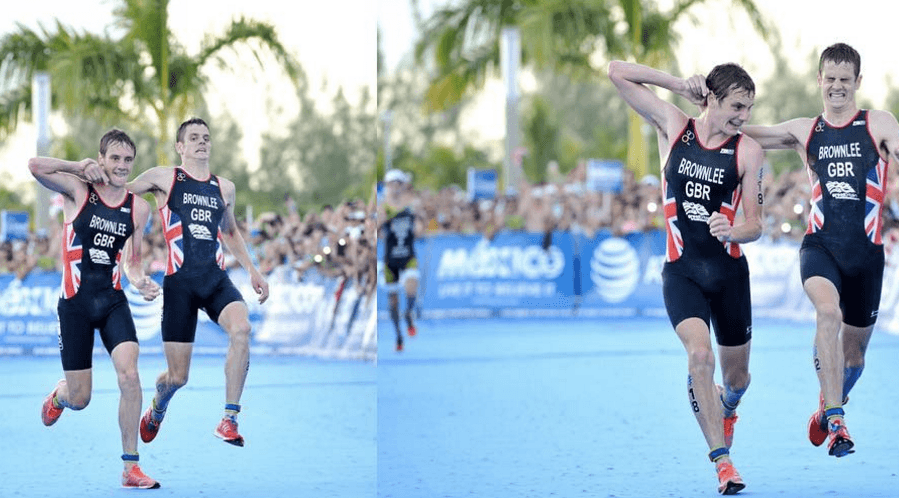 1. Teen with Down syndrome scores touchdown for mother sick with cancer

Robby Heil is a senior at  Novi High School in Michigan. Heil has Down syndrome and is also a member of the school’s football team. Usually, he is on the sidelines helping out with equipment. But last Friday, Robby stepped on the field with the goal of scoring a touchdown for his team and for his mom, Debbie Heil, who has terminal bone cancer. With 11 minutes left in the game, Robby ran to the end zone and scored a touchdown. Players from both teams immediately rushed to congratulate Robby and his mother ran on the field and gave him a giant hug.

Jonny Brownlee of Great Britain was about to finish first at the Triathalon World Series in Mexico when he began to stumble. Brownlee’s brother Alistair was in third place and had a chance to take the lead, but instead, he stopped to help Jonny. While first place was taken by South African Henri Schoeman, Alistair made sure to push Jonny over the finish line before him, so he could get second place. Alistair said it was his “natural human reaction” to help his brother. “I’d have done the same thing for anyone in that position,” he told BBC Sport.

NASA astronaut Kate Rubins has the coolest spacesuit ever. That is because her suit is hand painted by young cancer patients at the University of Texas MD Anderson Cancer Center in Houston. Last week, Rubins got to video chat with the kids while she was on duty at the International Space Station. The kids got to ask her questions and see the amazing suit they created being worn in space.

An abandoned puppy named Autumn was rescued from a garbage pile in Dublin, Ireland, by an observant dog. A terrier named Poppy and her owner were on a walk when the pup noticed Autumn in the pile of trash. Poppy ran over and it caught the attention of her owner who pulled Autumn out of the rubbish and took her to the Dublin SPCA. “Autumn will now go to an experienced foster home and hopefully will grow up to be a happy healthy dog all thanks to Poppy and her vigilant owner,” the Dublin SPCA wrote in a Facebook post.

5. Plane lands on house and everyone survives

Plane lands on house in Phoenix, Arizona and everyone survives https://t.co/4n9WwZ3JC6 pic.twitter.com/6KS9HMYXcs

A small plane crash landed on top of a house in Phoenix, Arizona, and amazingly no one was seriously injured. The aircraft was carrying the pilot and four skydivers. There were two people in the home. Everyone in the plane was able to get out before it crash landed and no one in the home was hurt. The pilot suffered a few burns, but officials say he will recover.

After being freed from roadside zoos, these bears are so excited to play in the grass and it is pretty much the cutest thing ever.

At 80-years-old, Ted McDermott has scored a record deal. McDermott, who has Alzheimer’s, uses singing as a way to cope with his memory loss. While he cannot remember the name of family members, he is able to recall the lyrics to songs. McDermott’s son, Simon, filmed a video of them singing in the car together and it instantly went viral. McDermott’s voice is so good that it caught the attention of UK’s Decca Records and he was offered a recording deal. McDermott first released track is a cover of Frank Sinatra’s “You Make Me Feel So Young.” Proceeds from the song go to the McDermott family and the Alzheimer’s Society.

Lauren Puryear of New Jersey has a passion for couponing. But instead of using the coupons for herself, the 29-year-old decided to create an organization called The Love Of Other, where she uses couponing to feed people in need. For her 30th birthday, Puryear is trying to reach a goal of feeding 30,000 people using food purchased with coupons.

9. Husband buys wife the double-decker bus where they first me

Now this is what you call a love story. Ken Morgan met his wife Shirley 60 met years ago on a double-decker bus traveling between Gloucester and Cardiff, England. Ken decided to do something very special for Shirley to commemorate their love by buying her the same double decker bus they met on.