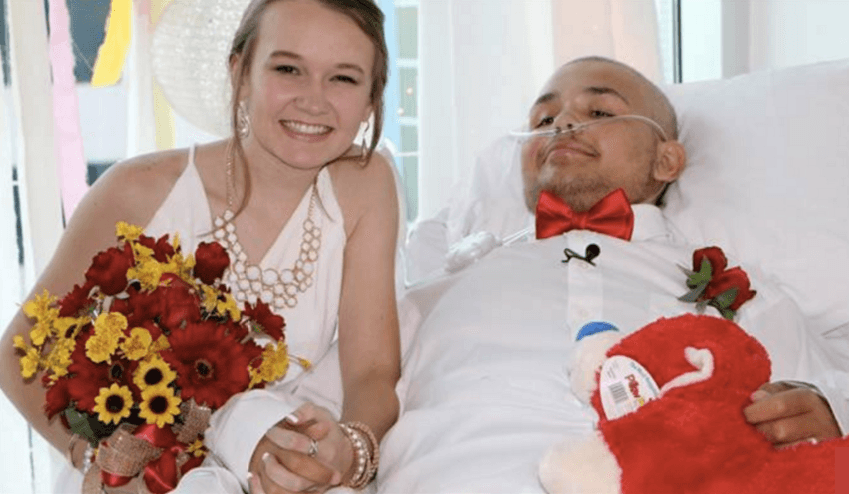 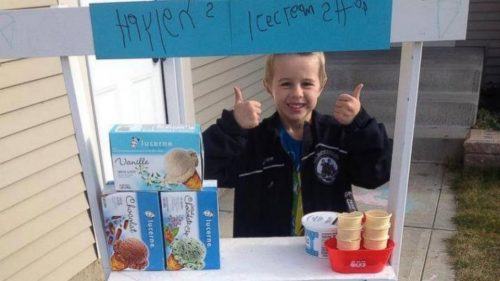 Hayden Astalos is a five-year-old with a huge heart. The Alberta boy is spending the summer running an ice cream stand and all the proceeds are being donated to help sick kids. Astalos sells his frozen treats for $2 a piece. He was inspired to start the stand after he held a fundraiser for the Ronald McDonald House on his birthday last September.

Swift Myers has been battling bone cancer since he was in grade seven. Now 18, Myers has spent the last month in intensive care at Saint Frances Children’s Hospital in Tulsa, Oklahoma. But Myers is not letting his disease stop him from living his life. This past weekend, he decided to take a big step and ask his girlfriend and high school sweetheart, Abbi Ruicker, to marry him. Ruikcer said ‘yes’ and the two were wed in Meyers’ hospital room with 100 guests in attendance. 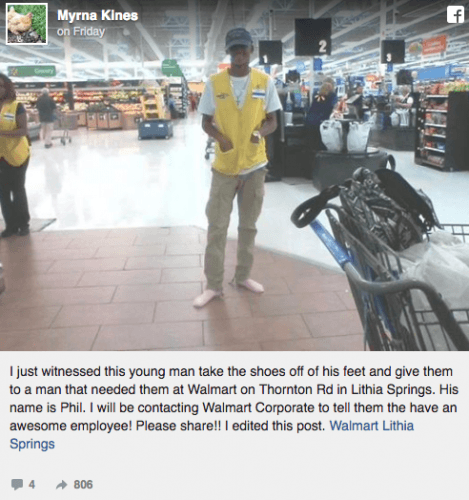 A Walmart employee from Lithia Springs, Georgia, is being praised for kindness. Shopper Myra Kines noticed the employee, who goes by the name Phil, take off his pink Converse shoes and give them to a homeless man outside. Kines was moved by the generous act and went up to Phil to commend him. She learned Phil was once homeless himself and he wore pink shoes and socks to commemorate his grandmother who died from breast cancer. Kines said Phil’s story “touched her heart very strongly.” She decided to write a Facebook post about Phil’s kind act and it has been shared hundreds of times.

While floods continue to rise in India’s Assam state, six baby rhinos have been rescued from the dangerous waters. Wildlife officials were able to safely remove the rhinos from Assam’s Kaziranga national park. Kaziranga is known as one of the world’s most important animal parks as it is home to the endangered one-horned rhino.

5. Woman offers wedding dress to brides without gowns after bridal shop closes down

Woman offers her wedding dress for FREE to bride-to-be who might lose out after bridal shop suddenly closed https://t.co/GZ9Hb5kx3M

Deborah Clarke is deciding to put her old wedding gown to good use. Clarke, 36, got married five years ago. After recently hearing that a popular local bridal shop was closing down— leaving many soon-to-be brides without gowns— Clarke offered to donate her wedding dress to someone who could wear it on their special day. “I won’t need the dress again, so if it can make someone else’s day like it did mine, then why shouldn’t I donate it?” Clarke said.

UBC linguistics student Meryl Bishop is happy to be reunited with her pet gecko, Nom Chompsky. Bishop was flying on a WestJet flight from Ottawa to Vancouver and asked to keep Nom with her in the plane’s cabin. WestJet officials told her that was not allowed and Nom had to move to the cargo hold of the plane for the duration of the flight. Unfortunately, the lizard went missing, leaving Bishop heartbroken. Luckily, Nom was found safe and sound three days later in the baggage department. WestJet has not offered Bishop an explanation as to how Nom ended up there, but she is just happy to see her beloved pet again.

Dallas French spent an exhausting day at the hospital with her four-month-old baby girl who tested positive for E.coli. French and her family went to a nearby Olive Garden restaurant following the hospital and things became even more stressful. As French was preparing a bottle for her baby, she ended up spilling it all over the floor. Their waiter noticed what was happening and offered to feed the baby for French so she could enjoy her meal.

“This melted all of us … he didn’t even know what we had went through that day and showed us love and understanding – not irritated that I had made a mess and my baby was screaming,” French said. A picture of the waiter and the baby was posted on Facebook where it has since gone viral.

8. Boy surprises mailman by leaving cold drinks for him on hottest day of the year

Eight-year-old Carmine McDaniel wanted to do something special for his neighbourhood mailman, Henry Bailey, on the hottest day of the year. So, the Virginia boy decided to leave a cooler full of chilled drinks for Bailey so he could drink them on his route. Bailey’s surprised reaction was caught on the McDaniels’ home security camera.

Here is another mailman story to end your day. This postal worker stops on his route every day to hug this German Shepard, even when he has no mail to deliver to the dog owner’s home. The sweet gesture of kindness will definitely make your day.