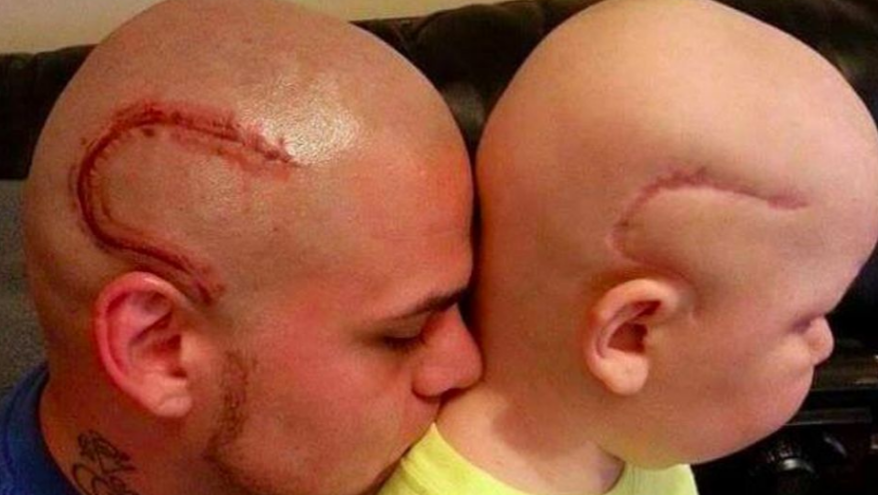 1. High school recreates graduation for student who woke up from a coma

Grade 12 student Scott Dunn awoke from a medically-induced coma after being involved in a car accident. Dunn was upset to learn that he missed his high school graduation while he was in the hospital. But the principal of Dunn’s highschool arranged  another graduation ceremony so the teen could walk across the stage. Over half of Dunn’s classmates showed up for the do-over grad. “I don’t know how to even explain it. I’m speechless to know that this many people are behind me,” Dunn said.

Seeing a loved one suffer from a serious illness is never easy, especially if that person is your own child. Josh Marshall wanted to find a way to comfort his son, Gabriel, who has been battling brain cancer. The little boy has been left with a giant scar on his head after multiple surgeries. So, Marshall decided to get a tattoo of the scar on his own head to support his son. A photo of father and son with their scars has gone viral. Marshall says he wanted to get the tattoo to boost Gabriel’s self-confidence.

Three men were waiting for their train to arrive at a New York subway station when they noticed another man faint and fall onto the train tracks. The trio immediately sprang into action and jumped on the tracks to save the man. The oncoming train was only two stations away. The amazing moment was all caught on camera.

4. Student saves up all year to give teachers a ‘thank you’ dinner

Eleven-year-old Cody Dortch of Edmond, Oklahoma, wanted to do something special for the teachers at his school before he moved on to middle school next year. Dortch set up a fancy dinner for all of his teachers and spent one year saving up for the event so he could pay for it himself. Dortch says that his teachers showed him so much dedication that he was motivated to do something nice for them in return.

Dortch says that his teachers showed him so much dedication that he was motivated to do something nice for them in return. “I wanted to take them out to dinner because my dad’s a teacher and I know how much he works and how much he does for other kids so I wanted to say they’re good for what they do,” he told Inside Edition.

5. Gas station employee breaks out into dance with customer

A gas station attendant from New Milnes, Nova Scotia, was caught on camera waltzing around the store with an elderly customer, and it is possibly the cutest moment of the week. The elderly woman is a regular patron at the station and according to the attendant, Sean, she asked him for a dance. He agreed and they waltzed around the store without a care in mind. The video was caught by the shop’s surveillance camera and, of course, it has gone viral.

Three best friends from Washington, D.C., celebrated a milestone last week. Ruth Chatman Hammett, Gladys Ware Butler and Bernice Grimes Underwood were joined by family and friends as they all rang in their 100th birthdays. The women were born in either June or July of 1916. Their birthday party was held at their local church, where they met as little girls.

7. Policeman rescues exhausted fawn sleeping on the side of the road

Policeman rescues a fawn after it decides to take a nap in the middle of the road! WATCH: https://t.co/U8JFyBDg5o pic.twitter.com/Nn0RecCwGh

A baby fawn chasing after its mother got a little too tired and fell asleep on the side of a busy road. Luckily, Officer Matthew Mitchell of the Columbus City Police Department spotted the little guy taking a snooze and carried him to safety.

Destyni Tyree is an accomplished grade 12 student. She was prom queen, head cheerleader, and managed to graduate high school two years early. Tyree is now off to college on a  full ride scholarship. But things were not always easy for the teen. A few years ago she was homeless, living in shelters after her mom lost her job and was no longer able to afford rent. But Tyree changed her life around for the better.

“Quite frankly, I’m just ready to go and live life. I know there’s a better life out there for me. It gets better. If you work hard enough, if you have that drive, if you have that motivation, it gets a lot better. I just time managed. I just wake up and do what I gotta do,” she told The Daily Mail.

9. Woman does not let wheelchair stop her from dancing

Dancer Chelsie Hill proves that a disability does not define her. https://t.co/tTdWTwjx4G pic.twitter.com/4W2Ir5Y3a8

Chelsie Hill always wanted to be a professional dancer. In 2010, she was left paralyzed in a car accident after a drunk driver hit her. But she did not let her injuries stop her from dancing. Instead, she was inspired to dance in her wheelchair. She wanted to encourage others to never give up hope on their dreams, so she started teaching others how to wheelchair dance as well.