1. Inmate offers to donate bone marrow to judge who sentenced him to 25 years in prison 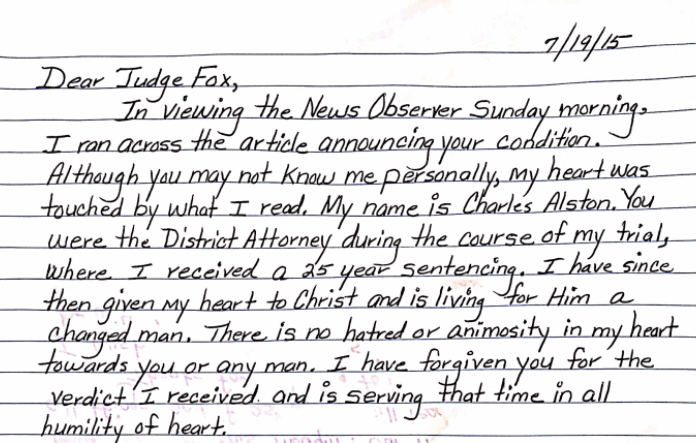 A North Carolina judge battling blood cancer received an offer for a bone marrow transplant from a very surprising volunteer donor. Judge Carl Fox works as a superior court judge and several years ago he sentenced Charles Alston to 25 years in prison for robbery. However, Alston held no grudge against Fox and sent him a letter offering him his bone marrow in an attempt to try and help the man who sent him to jail.

“You were the District Attorney during the course of my trial, where I received a 25 year prison sentence. I know you are in need of a matching donor for bone marrow. I may or may not be a match, but I am willing to make the sacrifice if needed,” Alston wrote in a note to Fox. Although prisoners are not allowed to donate bone marrow, Fox says he is extremely humbled by Alston’s kindness. “I had a lot of hate for Mr. Fox because he sentenced me to so much time, but I come to church a lot, I found God. So, I thought maybe if I could do something for someone else, I’d do it,” Alston said during an interview with WRAL News.

2. Toddler and dog rescued after falling into well

A toddler and his dog are safe and sound after being rescued from a well. Four-year-old Gabe Allbritton heard his dog barking in the yard and decided to follow the noise. While chasing the animal outside, both Gabe and the dog fell into a well approximately 24 feet deep. Gabe’s mother immediately called 911 when she could not find her son. After  nearly four  hours of being trapped, rescuers were able to pull the little boy and the dog out of the well. Emergency crews erupted in cheers after the dramatic rescue and both Gabe and his dog are expected to fully recover from the incident.

3. Lottery winner gives away all of his prize money to friend

After winning over $130,000 in a charity lottery draw, a Nova Scotia man has decided to give away all of the money to a close friend. Dennis Jessome was announced the winner of the lottery but gave the entire cheque to his friend Sheila Mitchell because she provided him with the money to purchase the ticket. “There’s not too many men like Dennis Jessome, I can tell you that,” Mitchell told CBC. “He’s been a good friend all my life, really.” 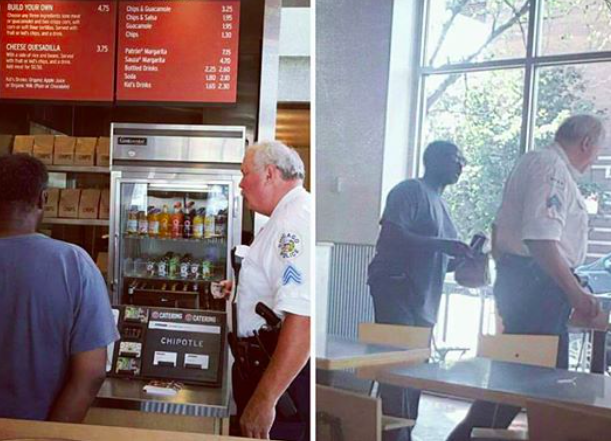 Chicago police officer Sergeant B. Hagarty was on his lunch break at the popular fast food chain Chipotle when he saw a homeless man looking for food in garbage bins outside. Hagarty approached the man and invited him inside the restaurant and proceeded to buy him a meal. A passerby caught the heartwarming moment on camera and images of Hagarty helping the homeless man have since gone viral. Sometimes a small act of kindness can go a very long way.

When a gang of six robbers attacked Sami Said’s north London jewelry shop, he began to panic in fear. Said’s staff could not defend themselves or the shop against the gang and the thieves managed to leave the store with thousands of dollars worth of jewelry. However, when robbers tried to get away, over 30 shopkeepers from neighboring stores surrounded them. The robbers were frightened off and, although they still got away with some jewelry, they left the majority of the stolen goods behind.

The shopkeepers proceeded to help Said clean up his store and return what was left of the diamonds and gold. To show his appreciation, Said held a giant feast for his fellow businessmen who helped him scare away the robbers. “I’m very happy everyone helped. I say thanks to all those people. They did a very good thing for me,” Said told the Evening Standard. 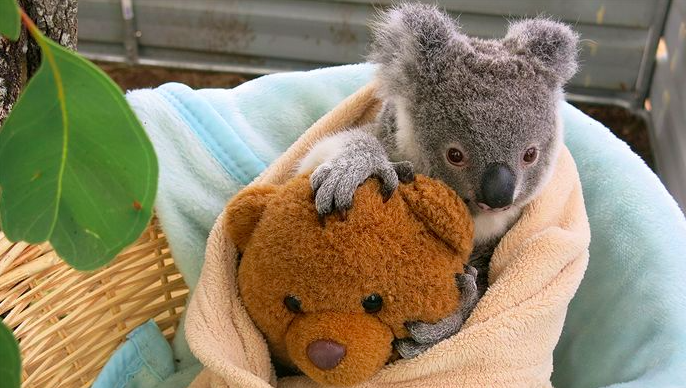 A $16,000 boost in funding at the Australian Animals Care and Education Center (AACE) will go along way for orphaned koalas at the animal refuge. The money will be used to provide the koalas with food and new homes. “It will help with us for equipment for leaf cutting and maintenance. It will also help us build two more enclosures to house rescued koalas, also some rescue equipment that we can pick up koalas, move them and get them to vets,” AACE founder Tina Janssen told ABC Capricornia.

Police in New Zealand stopped traffic to help some very special pedestrians. Check out the video above to see how a mother duck and her ducklings managed to cross the road.

8. Billionaire offers to buy an entire island to help refugees struggling to come to Europe

Egyptian billionaire Naguib Sawiris is offering to help refugees from Middle Eastern countries trying to get into Europe by buying them their own private island. Sawiris says that he is willing to purchase and uninhabited island in Greece or Italy that can help house up to 200,000 refugees. Even though Sawaris’ idea is quite far-fetched, he told CNN that he has come up with a “very simple solution” to solve a very pressing global humanitarian crisis. “I sometimes think the politicians don’t have a heart,” Sawiris said.

“They sell the island to me and I’ll make a temporary shelter for these people,” he told CNN. “I’ll make a small port or marina for the boats to land there. I’ll employ the people to build their own homes, their schools, a hospital, a university, [and] a hotel.”

9. Gorilla fascinated by photos of other gorillas on cell phone

A video of a zoo-goer showing a gorilla pictures of other gorillas on his cellphone has gone viral. Jelani the gorilla appears to be mesmerized by the pictures on the phone while hanging out with a friendly human visiting the Louisville Zoo. Jelani is Western Lowland gorilla, which is classified as an “endangered species.” He lives in a four-acre sanctuary at the zoo. Check out the video above to see Jelani scrolling through some pictures on an iPhone and being amazed by what he sees.