1. Police officer helps homeless woman and her daughter by giving them food to eat and place to stay

After a homeless mother and her one-year-old daughter showed up at a Maryland police department last week, officer Che’ Atkinson knew he had to do something to help them. The mother claimed she was a victim of domestic violence, and fled her home with her daughter. The two arrived at the police station, hungry and exhausted, with nowhere else to go.

Using his own money, Atkinson bought the woman and her daughter a hot meal and got them a hotel room to stay in. “I had the extra money,” Atkinson told WUSA9. “What would it hurt just to put them up for a night to make sure they’re safe?” The woman and her child were eventually able to contact family members for help, but Atkinson’s kindness has certainly not gone unnoticed. Praise has poured in for the officer who says he was simply just trying to do his job.

2. Cat saves toddler by taking bullet to the head

Opie the cat is being hailed as a hero after taking a bullet to the head and saving a toddler from getting hit. Opie’s owner, Angelica Snipe, was in her home in York, Pennsylvania, when a stray bullet suddenly came flying into the house. The bullet deflected off Opie’s head, blocking Snipe’s three-year-old son from getting hurt. When Snipe realized Opie was shot, she immediately thought the cat would not survive. However, despite the injuries Opie suffered, he is expected to fully recover.

3. After nearly a decade spent in a shelter, this dog finally finds a home

For nearly a decade, Bridgette the dog has been stuck in a Kentucky animal shelter with no one wanting to adopt her. “When she first came, she was playful. But as you stay here, over a course of time, personalities can change,” explained Bunny Zeller of the Animal Care Society. However, everything changed when Sherrie walked into the shelter in June. It happened to be Bridgette’s birthday and Sherri saw the shy dog and wanted to adopt her. Caretakers at the shelter told Sherri that she would have to regularly visit Bridgette before adopting, to make sure a trusting relationship was built between her and the dog. “She was coming constantly and spending time with her. She walked her some to where she built Bridgette’s trust up of her. By the time they left, Bridgette was all over her, kissing her and licking her,” Zeller said.

Last Thursday, Sherri was able to take Bridgette home, ending the dog’s ten-year stay at the shelter. Although the Animal Care Society will miss one of their oldest residents, they are overjoyed to see Bridgette find a caring home.  “Because she has been with us so long it is hard to say goodbye, but our joy for Bridget far outweighs any sadness. Knowing that Bridget will wake up tomorrow and the day after and the day after and so on in a loving home is a dream come true,” the shelter wrote on their Facebook page. 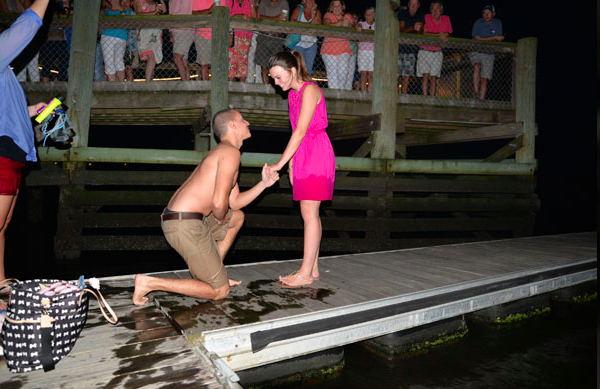 When Matthew Pica was proposing to his girlfriend, Kayla Harrity, he was not expecting to lose the ring. Pica was planning to pop the question to Harritty on the oceanfront in Southport, North Carolina. As Pica got on one knee and was about to take the ring out of the box, it fell through the cracks of the deck that the couple was standing on and into the ocean. Passers-by and family members who came to watch the proposal immediately tried to help Pica retrieve the ring by jumping into the water to look for it.

After searching for nearly 2 hours, the ring was found, thanks to the kindness of family and strangers. Pica was able to propose to Harrity, making it a night to remember. “All of a sudden, everyone was chanting ‘Propose again! Do it again!’” Harrity told reporters. “It was the best feeling in the world. My fiancé, soaking wet, smelling like salty, fishing water, proceeded to get down on one knee and put the beautiful ring on my finger!”

5. Man buys lottery ticket with $20 he finds on the street and wins the jackpot 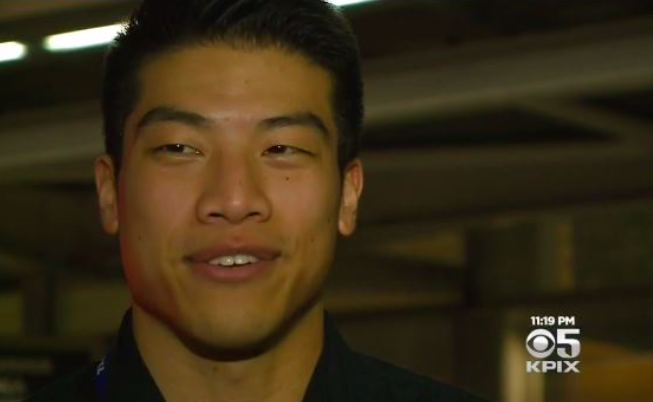 Hubert Tang was walking outside San Francisco International Airport, when he spotted $20 on the street. Tang picked up the money and decided he would use it to buy a few lottery tickets just for fun. Tang purchased two ‘scratch to win’ tickets from a nearby corner store and he ended up winning the $1 million jackpot.

“I scratched the ticket outside of the store. I told my friend whom I was with that I didn’t know if it was real, but ‘I think I just won a million dollars,’” he said. For now,Tang plans on keeping the money in his savings account, but he also wants to help pass on his good luck. “Maybe I’ll start leaving $20 bills on the street in random places,” he said.

With some courage and a mop, Wang Baocheng of Weifang, China, was able to save the life of a toddler who was about to fall from a high-rise window. Wang was walking through his neighborhood when he heard cries for help. He followed the crying noise to find a little girl dangling from an apartment ledge. Apparently, the young girl was left home alone and managed to crawl out the window. Her head got stuck in the window’s protective bars, and that was the only thing keeping her from falling to the ground.

Wang quickly ran into the apartment, managed to get inside the unit beside the little girl and climbed out the adjacent window. Using a mop, he held the girl steady, preventing her from falling. Luckily, the girl’s parents arrived home and safely pulled her back inside. “Wang held the girl up for more than 10 minutes… I think his brave and courageous actions are worthy of praise,” a resident of the building told CCTV.

7. Waitress pays for cancer patient’s bill and leaves behind a heartwarming note 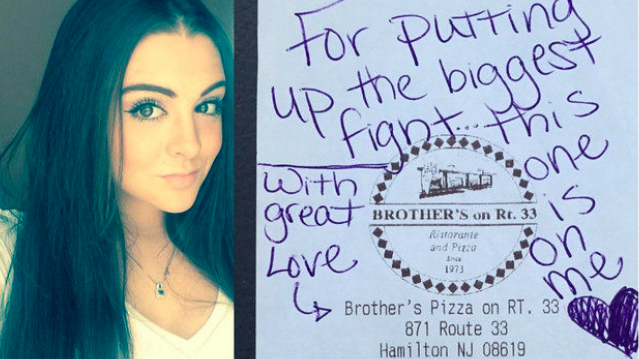 Rick and Annette Lewallen experienced an act of kindness that truly brightened their day. The couple was dining out at Brother’s Pizzeria in Hamilton, New Jersey. It was a much-needed night out for the Lewallens as they are trying to cope with the stress of Rick’s on going brain cancer treatments. When their waitress, Daniela Bossi, brought them their bill, the couple was moved to tears.

Instead of charging the Lewallens for their meal, Bossi paid for their tab and left behind a note that read, “For putting up the biggest fight, this one is on me.” Bossi, who is a family friend of the Lewallens, is aware that their medical bills are adding up and putting financial stress on the couple. Annette shared Bossi’s act of kindness on a Facebook post and the story has since gone viral. “It was a vote for humanity. I’ve finally stopped crying about it,” Lewallen said.

Jason Frost and his friend Brandon Key were out fishing on the Warrior River in Alabama when they made a very surprising catch. Out of nowhere, Frost and Key heard a faint ‘meow’ come from the water. A stray kitten was swimming towards them. The men picked up the cat and then, another identical kitten swam up to their boat. Frost and Key brought the orange tabby cats to shore and gave them to two little girls who wanted to adopt them. Frost captured the rescue on his phone, and posted it on Facebook. “Everybody always has a crazy fishing story, and that’s all it is, is a story,” he told reporters. “If I wouldn’t have had this on video, everybody would have thought I was crazy.”

9. After finishing his night shift as a taxi driver, this man and his family go out to feed Australia’s homeless

Tejinder Singh is an ordinary Australian taxi driver with a big heart. On the last Sunday of every month for the passed three years, Singh and his son Navdeep have gone out to feed the homeless in the city of Darwin. Singh and his family make home cooked Indian meals and drive around town offering hot food to some of Darwin’s neediest residents.

Singh refuses any money for his efforts and says it is the message of charity  promoted by his Sikh faith, that motivates him to help. “My religion says 10 percent of income goes towards needy and poor people no matter they belong to your religion or any religion,” he said.  Earlier this month, Singh was nationally recognized for his ongoing acts of kindness by being named ‘Australian of the Day.’