If you won’t be travelling, Vancouver has many cheerful Christmas community events. Check out the the German-style Vancouver Christmas Market, Portobello West Market at Creekside, Got Craft? at the Maritime Labour Centre, and Etsy pop-up holiday market at @thisopenspace.

10 Christmas Markets Worth Travelling For 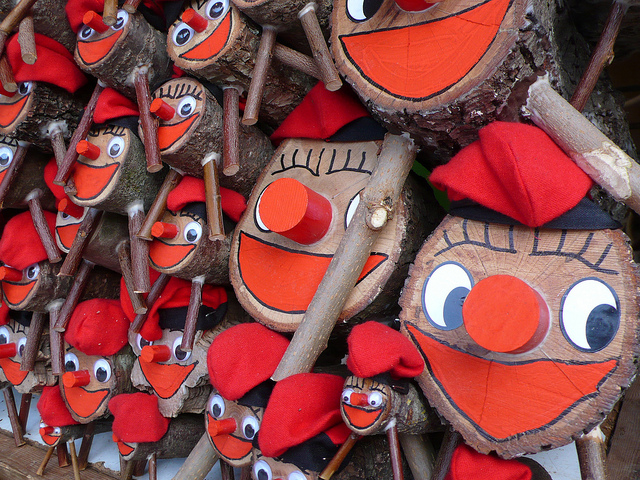 When you hear traditional Christmas market, you usually think Germany. But Barcelona loves their mercat de Nadal too. For over 200 years, droves of locals and tourists have made the pilgrimage to  Fira de Santa Llúcia for 300 stalls selling Christmas greenery, handmade nativity scenes and edible treats like turron (nougat with honey and almonds).

The must-buy items? Fresh-cut mistletoe for good luck, and the bizarre Catalan nativity figure Caganer — a man dressed in Catalan garb squatting and pooing Christmas gifts. While your at it, scoop up his merry sidekick Tió de Nadal — a turd log full of Christmas gifts.  Insider tip: instead of mulled wine the Catalan celebrate with cava. 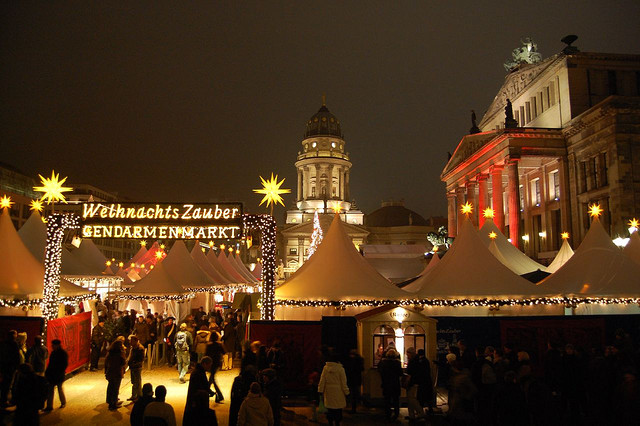 Berlin has an overwhelming number of Christmas markets on offer alongside its usual lineup of edgy cultural events. The Berliner Weihnachstzeit is not the biggest; it’s the quaintest. Set near Rotes Rathaus and the Marienkirche with a backdrop of Berlin’s traditional market streets, the glowing wooden houses evoke the Berlin of a century ago.

In addition to the usual Christmas inputs like mulled wine (gluhwein), marzipan, and brats, you’ll find bread baked medieval-style and hot mead is served in clay jars. Best of all, the centre of the Christmas market is a 600-metre ice rink. After you take a twirl, take a ride up in the 50-metre high ferris wheel for a view of the Christmas lights at Brandenburg Gate and Potsdamer Platz. 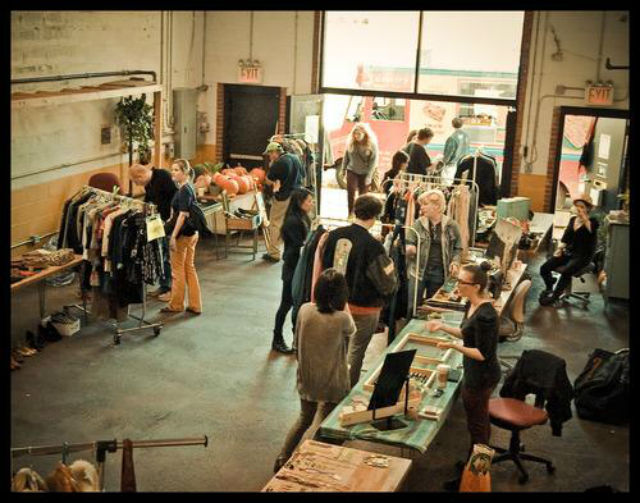 In a post-industrial world that worships handmade, Brooklyn symbolizes makers. Skip the Brooklyn Flea Holiday Market (love it, but done it) and head to the Brooklyn Pop-Up Holiday Market in Bushwick where you can find a good selection of these craftsmen selling carefully-made, aesthetically-pleasing goods.

Not your typical holiday market, this one has DJs and complimentary sangria or mimosas while supplies last. Stocking stuffers to stock up on: Kizmet Kitchens’ vegan peppermint goji-berry chocolate bars ($8) and leather journals by Elizabeth Dunn ($45). Treats to eat while spending: a cone double stacked with Penny Lick’s licorice ice cream and cranberry sorbet. 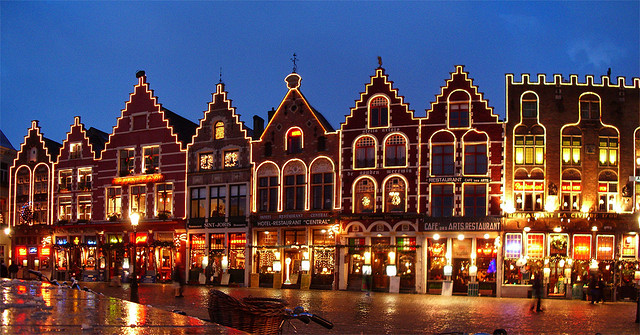 The medieval Bruges Market Square gussies up for Christmas with an ice skating rink and softly-glowing stalls selling things that will help you build up your hibernation padding. Bruges gets major points for special Old World atmosphere (because of its canals it’s called the Venice of the north)  and we’re pretty convinced than mellow, sweet Belgian chocolate is the perfect pairing for mulled wine. 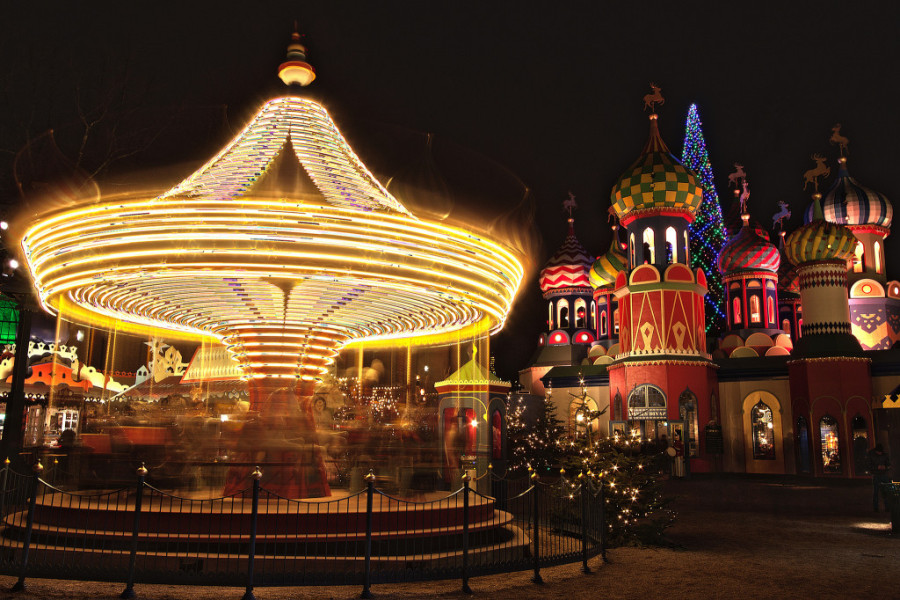 Christmas at Tivoli is an heartfelt expression of the Danish love for Christmas. Because of this, as well as the sub-zero temperatures, the real reindeer, and the dizzy romance of doing loops around an iceskating rink, the Christmas market at Tivoli will have you convinced you’re at the North Pole.

First off, get yourself a mulled wine (gløgg here), a heap of apple doughnuts (appleskives) and gingerbread (brunkager). Next, get your sticky fingers over to the twinkling wooden huts to shop for cheerful, hand-blown glass ornaments and naughty Danish Christmas gnome figurines (nisser). Lastly, if you’re not up for the carousel, treat yourself to a performance of the Nutcracker, with beautiful costumes designed by Queen Margrethe of Denmark herself. The story has been altered a bit, so that it now takes place in old Copenhagen, where Hans Christian Andersen makes an appearance as the mysterious storyteller. 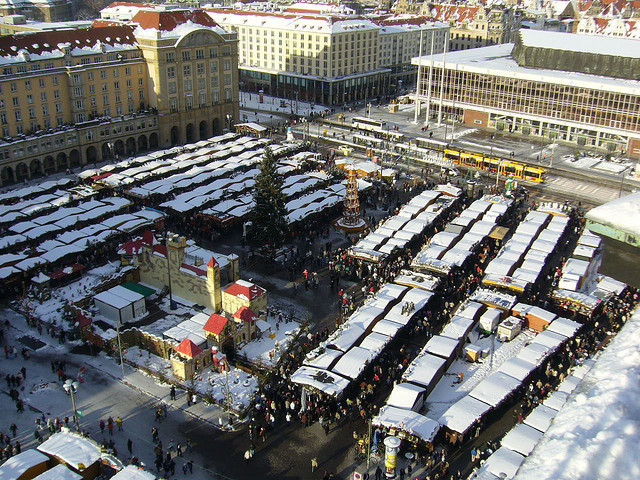 Striezelmarkt takes the cake (or should we say pfefferkuchen) for being Germany’s oldest Christmas market. The market turns 580 this year. 3 million visitors are expected, drawn to 250 stands selling all kinds of seasonal delights and trinkets.

The must-try here is the stollen, from which the market gets its name. In order to be authentic, stollen must be baked exclusively by registered members of the Dresden bakers’ guild, following a traditional and well-guarded recipe.The bread-meets-cake hybrid is light as air, studded with dried fruit and laced with marzipan. It wouldn’t be Christmas without the layer of snowy powdered sugar on top. 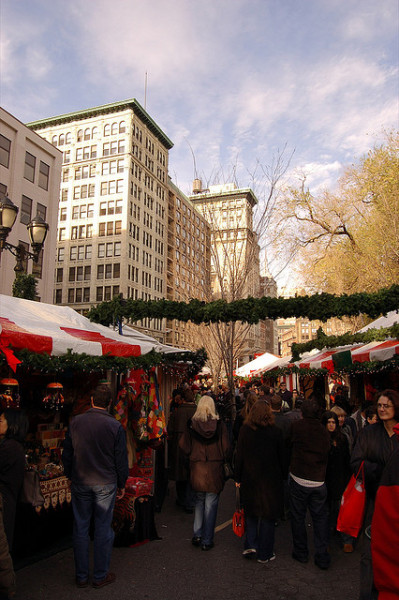 Over one million visitors from NYC and abroad gather at the candy cane-striped tents each holiday season to search for treasures made by local artisans and eat delights by well-liked New York businesses such as Momofuku Milk Bar. Once you’ve had your fill of waffles smothered in  spekuloos gingerbread butter, scoop up one-of-a-kind gifts like brew-your-own-beer kits and pretty letterpress cards by Pepper Press of Brooklyn. 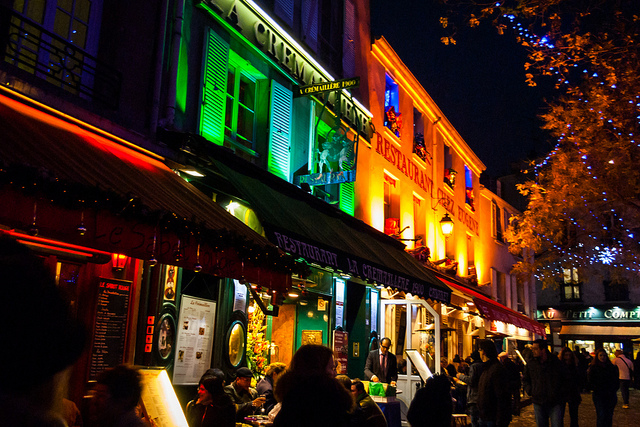 La Ville-Lumière really sparkles during the holidays. While you’ll want to check out the holiday decorations in the main tourist areas, skip the overpriced Christmas marche on the Champs-Élysées and head to Village de Noël de Montmartre for more tranquil stroll. 60 stalls surround the snow-white Sacré-Coeur Basilica and the vendors aren’t permanently annoyed by tourist French. 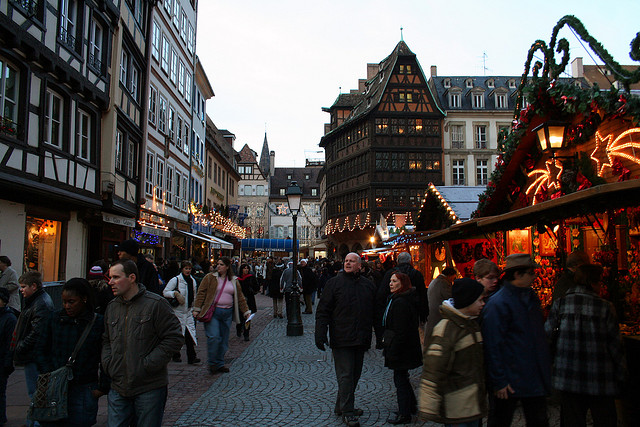 French or German? Vin chaud or gluhwein? In Strasbourg, situated on the French side (though this has been known to change) of the border between France and Germany, you don’t need to choose. The self-proclaimed capital of Chrismas is fairy-tale perfect — so much so that the entire city centre is considered a UNESCO world heritage site.

Christmas is the best time to stroll through streets of half-timbered houses while snowflakes drift softly down. Make your way to the Christkindelsmärik–considered the best Christmas market in Europe –which dates back to 1570. After you pay homage to the giant Christmas tree, stock up on Christmas cookies (they’re known for these) like spritzbredle (almond shortbreads) and bredele (cake-y bites flavoured with aniseed, cinnamon, marzipan, ginger and honey.) Other must-buy regional specialties: dark and spicy Christmas beer, black forest ham, and foie gras. 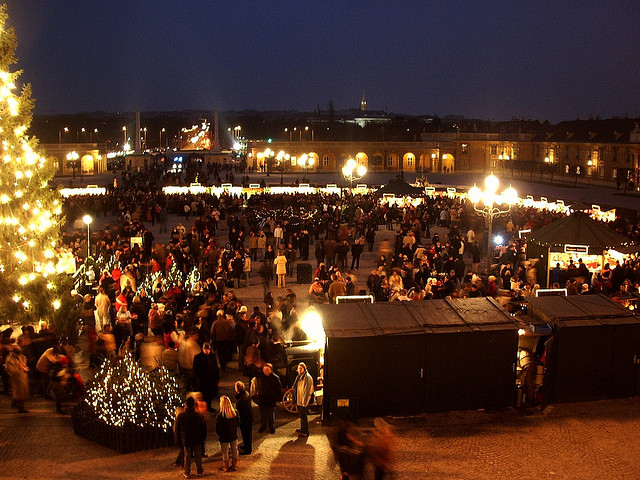 When there’s a party at the ginormous Hapsburg crib, you know it’s going to be good. Vienna’s most visited monument really throws down for Christmas with 80 huts organized in a circle on their front lawn as well as dozens of glimmering Christmas trees and live musical shows including frosty-breathed choirs carolers and gospel choirs.

What’s your favourite Christmas market? Let us know by commenting below.