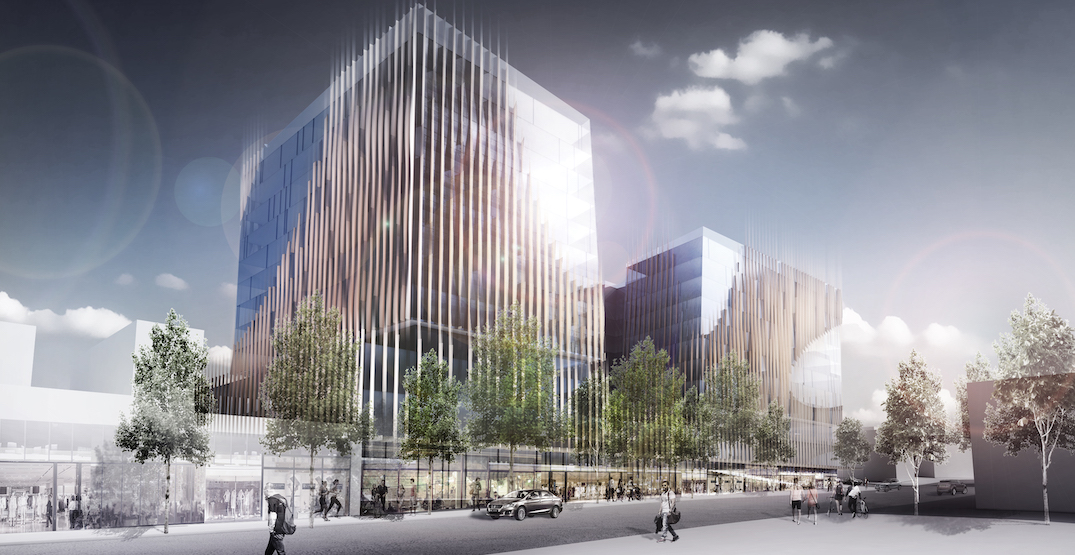 A new hotel building complex has been green lit to replace the existing Park Inn & Suites by Radisson and the Fairview Pub and liquor store at the southeast corner of the intersection of Laurel Street and West Broadway, just footsteps from the emergency room entrance of Vancouver General Hospital (VGH).

In a meeting today, Vancouver city council unanimously approved the rezoning application for 878-898 West Broadway — located immediately across from the southwest corner site of the future Fairview–VGH Station street entrance for the Millennium Line extension.

The redevelopment, designed by Arno Matis Architecture, calls for two high-rise hotel buildings of 11 storeys and 13 storeys, including a three-storey podium that connects the towers. The permitted height of the site is constrained by both view cones and VGH’s helipad flight path. 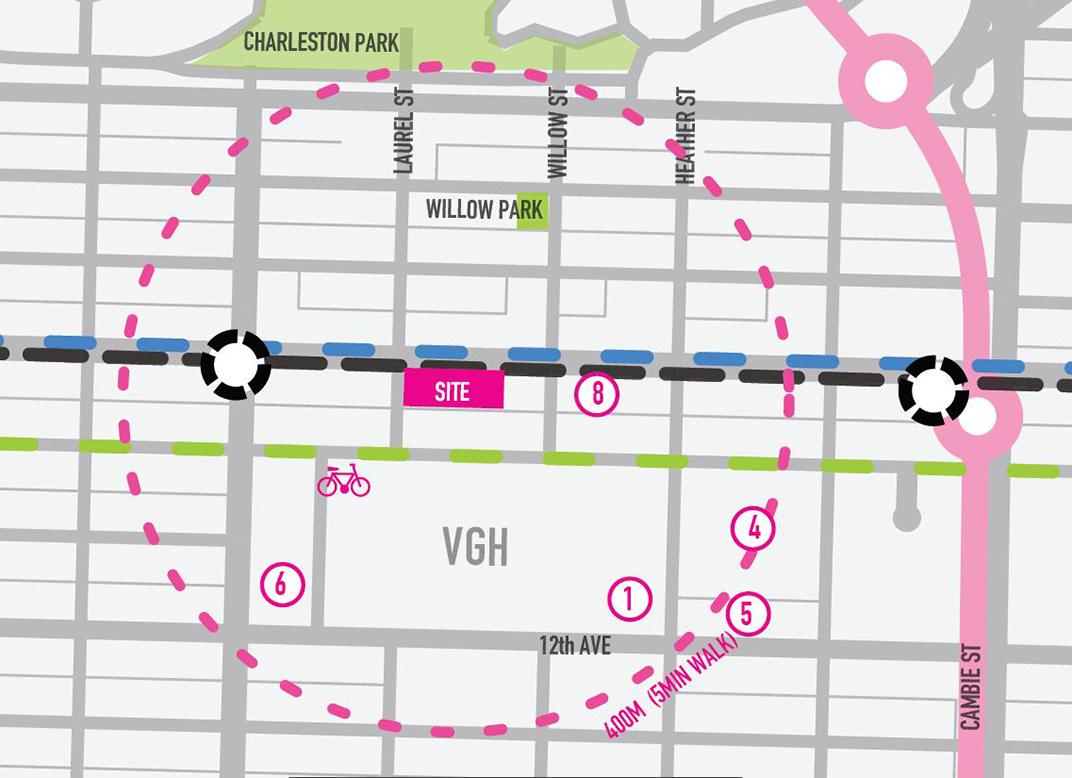 There will be a total of 438 hotel rooms — a mix of 258 traditional short-term stay hotel units and 180-long-term stay units with kitchenettes — to meet the diverse needs of both tourists and medical precinct visitors, including people working in or accessing medical services and families of patients.

The redevelopment’s podium contains about 29,000 sq. ft. of ground-level retail and restaurant space, as well as hotel amenities, office and meeting spaces, fitness centre, restaurants, and an outdoor courtyard within the upper levels of the podium. 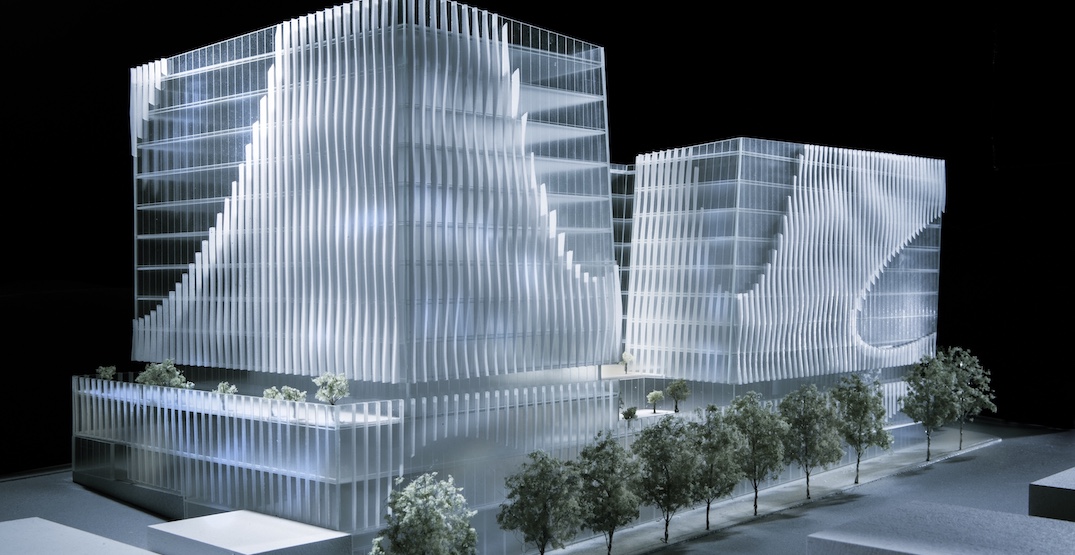 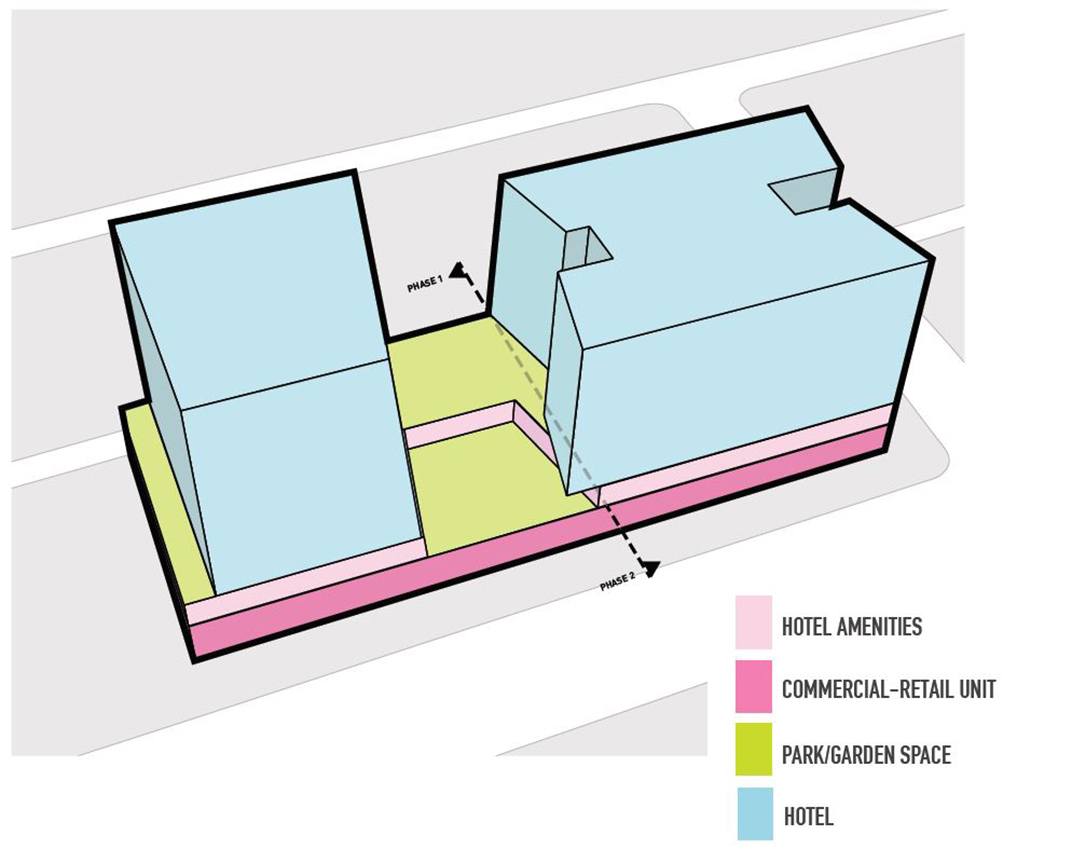 The main concern expressed by city council over the proposal centred on the loss of the decades-long Fairview Pub, which is one of the few remaining live music and entertainment venues on the Broadway Corridor.

As an initial step to mitigate this loss, city council voted to add an amendment that encourages the property owner to continue live music uses in the redevelopment. City staff also noted that a portion of the ground-level commercial space within the podium could be purposed as a new live music venue, but this requires further consideration by the proponent.

Councillor Pete Fry said the Fairview Pub, given its location within a single-storey building and an open-air rooftop parking lot, was “living on borrowed time.”

Councillor Sarah Kirby-Yung added: “It’s important for council to try to move forward with a greater good here, which is the badly needed hotel rooms to support our tourism sector but also balancing and minimizing the loss of valuable community amenities like the live music space.” 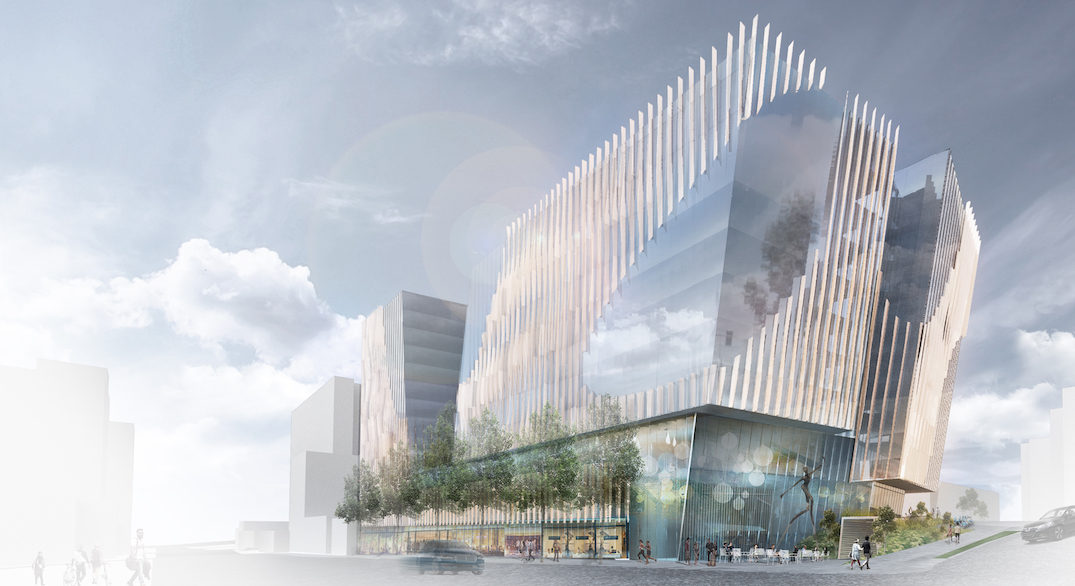 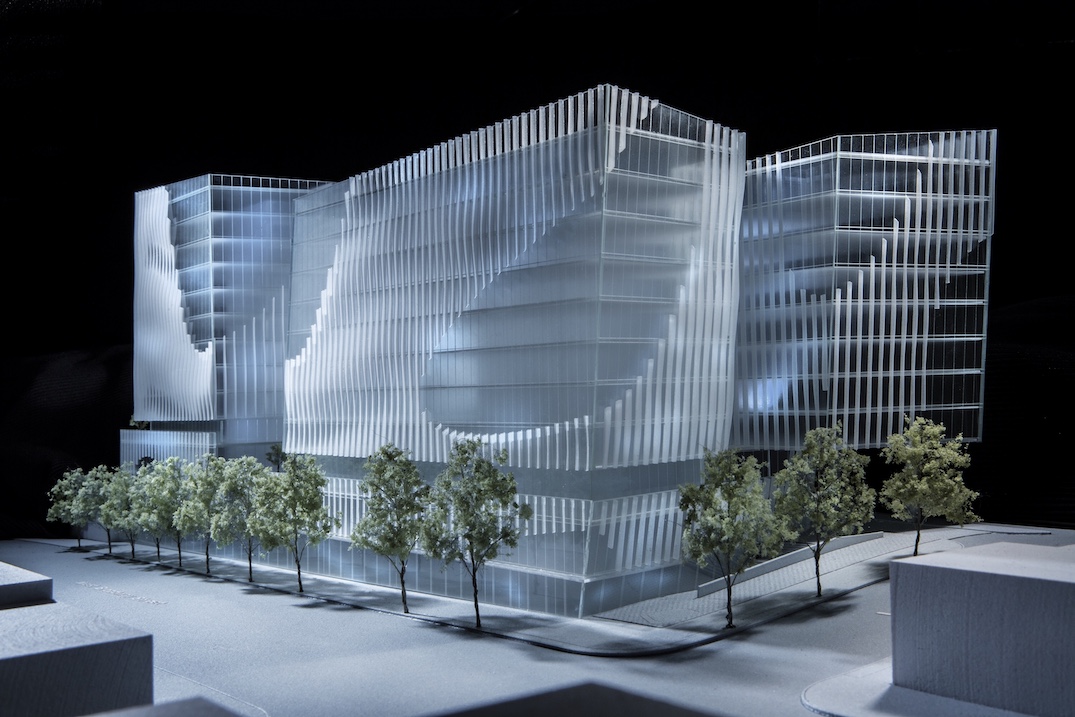 Gwendal Castellan, Tourism Vancouver’s manager of sustainable destination development, spoke at the public hearing, highlighting that Vancouver currently has some of the highest occupancy rates in the country — reaching 80.8% for the last full year of data — due to the region’s strong tourism industry and the dwindling hotel room supply.

There has been a net loss of 1,100 hotel rooms since the Olympics, and just this past month an additional 327 rooms were removed from the supply as the result of the closure of the Four Seasons Hotel Vancouver.

“This is the first significant hotel development to come to Vancouver in some time,” said Castellan, adding that “we’re still keeping our head above water as far as the number of hotel rooms we have in the city.”

This hotel redevelopment represents a fourfold increase in the number of hotel rooms over the existing aging property.

Vancouver’s newest hotel properties have been largely for the upscale market; the last major hotel additions — Parq Vancouver’s JW Marriott and Autograph Collection’s The Douglas, and The Exchange Hotel — are all higher-end properties. But this redevelopment promises to create more affordable accommodations options to visitors, with a mid-range, three-star hotel operator being targeted. 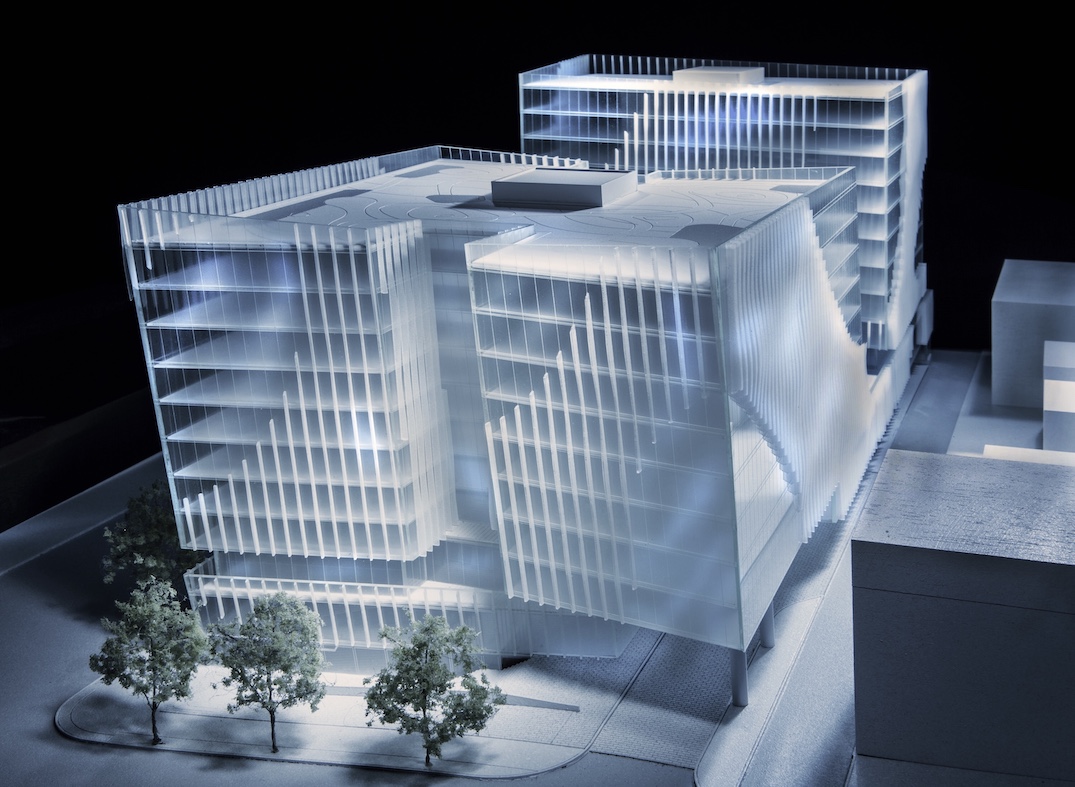 As for the building’s architecture, there is an emphasis on a “healthy building design” through the use of natural materials such as wood materials, specifically the incorporation of hybrid-mass timber elements and the use of wood that contrasts with the facade’s high-efficiency glazing.

Moreover, the wood materials on the facade — a “responsive building skin” — are intended as both passive shading devices and the dominant theme in the rhythm and textures of the architecture.

As an amenity for hotel guests, landscaped outdoor spaces on the rooftops of the podium and towers add to the “wellness-oriented” offerings of the new building, such as a courtyard, gardens, and looping walking paths.

With these features, the project is aiming to achieve LEED Gold and WELL Building Standard certifications.

“It’s an incredibly attractive building,” said Fry. “It’s on a stretch of Broadway that could use a bit of flavour, and I do appreciate the thought that went into the architecture… and the various components that are really going to make this a great asset for this part of the city.” 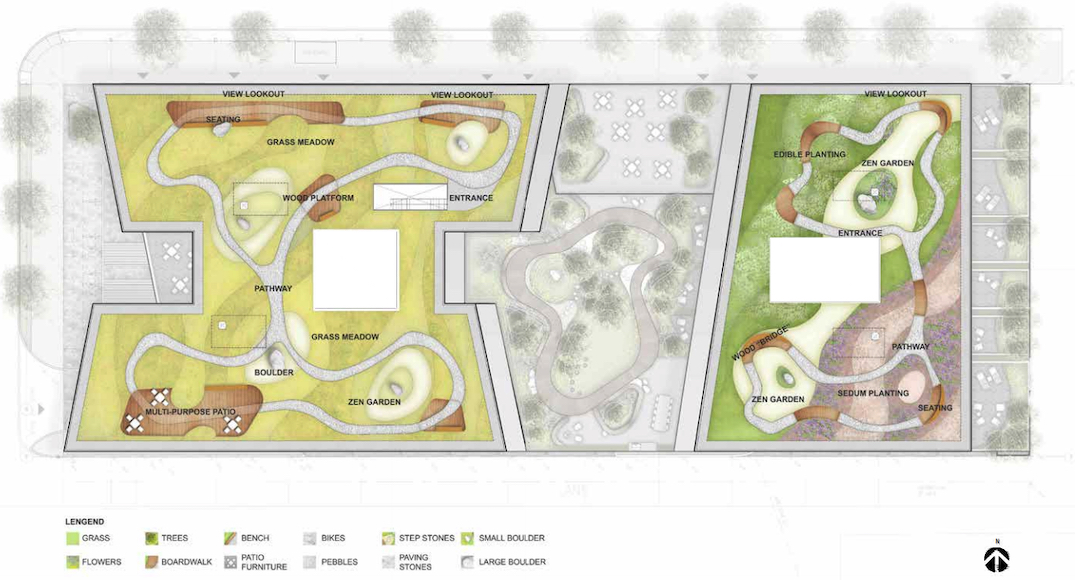 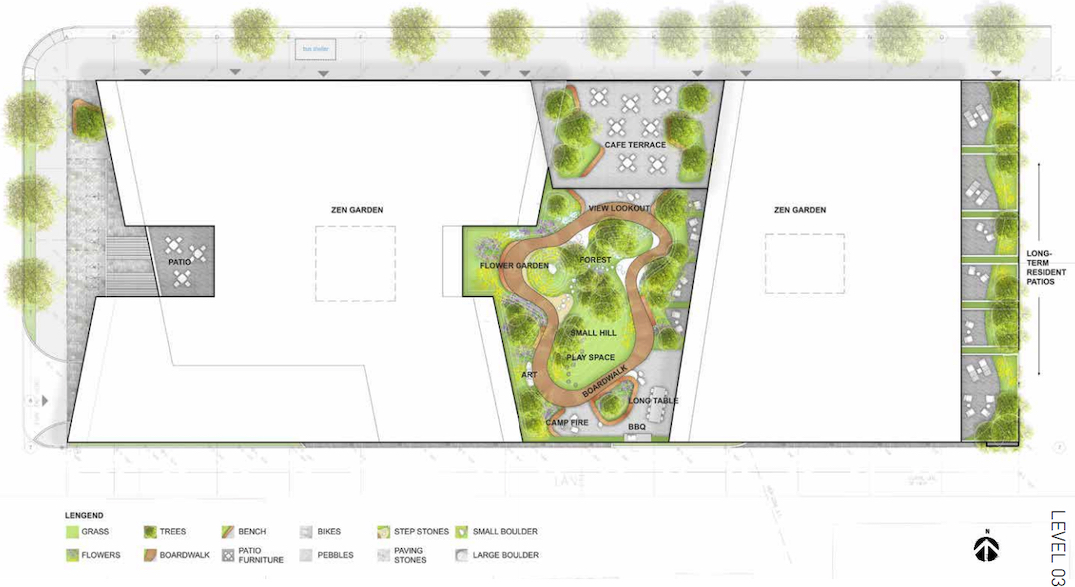 Altogether, the redevelopment will create a total floor area of 352,000 sq. ft., giving it a floor space ratio density of over eight times the size of its 40,700-sq-ft lot. Given the expected needs of the guests of a hospital-serving hotel, the complex will have 485 vehicle parking stalls within the underground levels.

The temporary moratorium on commercially-driven rezoning projects within the Broadway Plan’s study area is still in effect. City council was able to consider this proposal as the rezoning application was submitted before the start of the planning process, which is expected to conclude by the end of 2020.

In exchange for the rezoning approval, the proponent is required to provide $10.6 million in public benefits, including a $2.42-million community amenity contribution, $7.5 million in development cost levies, and $721,000 for public art.