This weekend, EAT! Vancouver takes place at BC Place Stadium. If you like food, you’ll want to stop by. In addition to 250 exhibitors, there are lots of “bites” which are samples prepared by restaurants and chefs, “Sip,” an area dedicated to wine, beer, and other “adult” beverages, a section on culinary tourism, and some of our best celebrity chefs, like Ned Bell, Vikram Vij, Chuck Hughes, Lynn Crawford, Rob Feenie, and Michael P. Clive. You can also check out a $2,600 bottle of water, encased in Swarvoski crystals, or the square melons at the Urban Fare Booth. 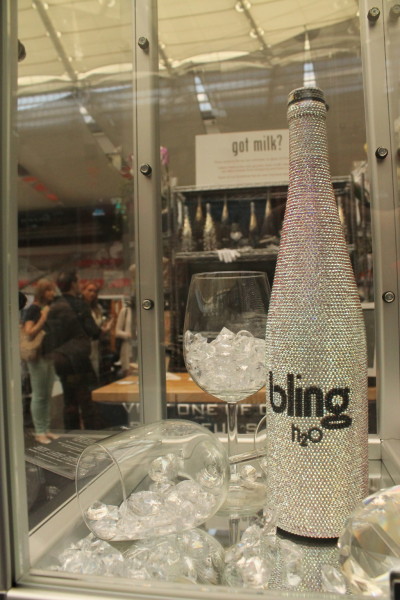 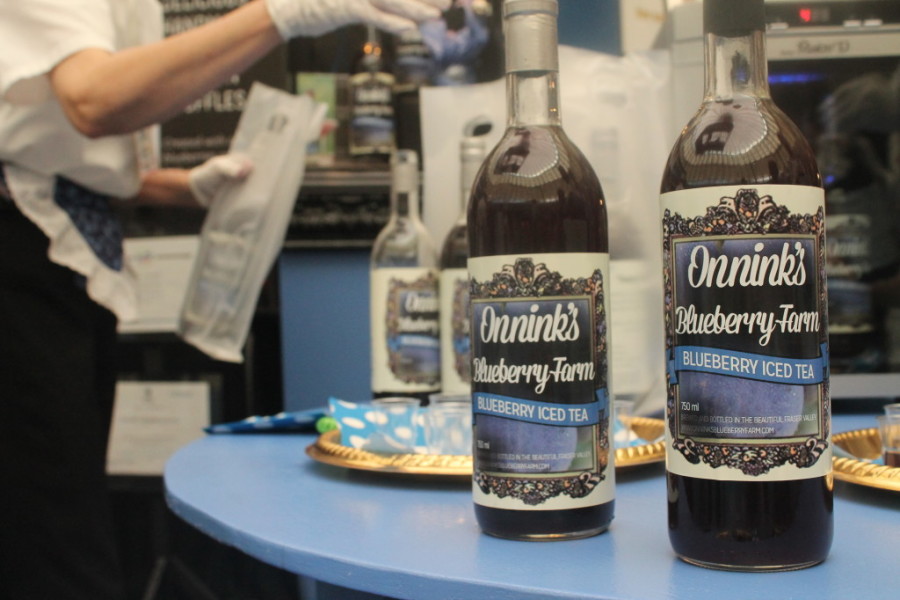 You’ll find a ton of soft drinks, iced teas and lemonades at EAT! Vancouver, but my favourite was Onninks. The blueberries are grown on the Onnink family farm in Abbotsford, and the tea is sweetened with honey. Blueberries are packed with antioxidants, and this is a pretty pleasant way to get ’em in you.

Dave’s Killer Bread is the #1 selling organic bread in the US, and it’s now available to us here “up north.” There are three varieties; 21 Whole Grains and Seeds, Powerseed, and Blues Bread. Each slice packs 6 grams of protein, but the bread itself is shockingly light. You’d expect it to be heavy and dense with all those whole grains and seeds, but it’s so fluffy! 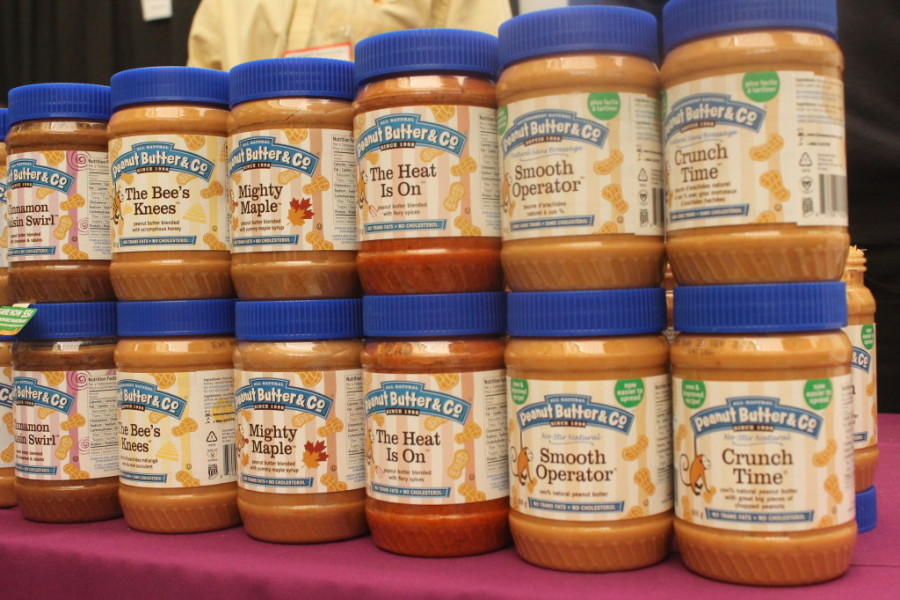 Another import from down south, I first tried these peanut butter varieties a couple months back at the Grocery Expo. They have a ton of different varieties for your morning toast, including peanut butter blended with honey, chocolate (my personal fave), cinnamon raisin, white chocolate, or maple syrup. They even have one called “The Heat is On,” a spicy version that would be great for adding into sauces for satays, stir-fries or chilis. Or just eating out of the jar… 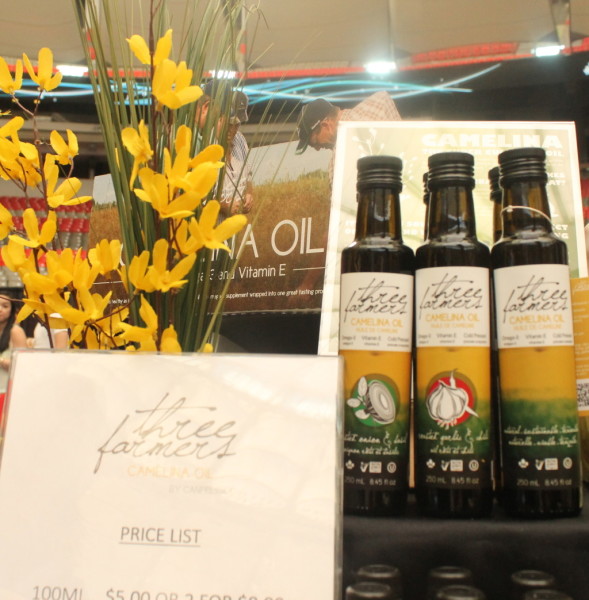 I was first introduced to Camelina Oil by Chef Ned Bell (Yew), who is a big fan of it. Grown in Saskatchewan, Camelina packs an entire day’s requirement of Omega-3 Fatty acids in one tablespoon. The best part? Heating it doesn’t destroy the Omegas. In fact, Camelina has an incredibly high smoke point, of 475 degrees, making it perfect for searing. 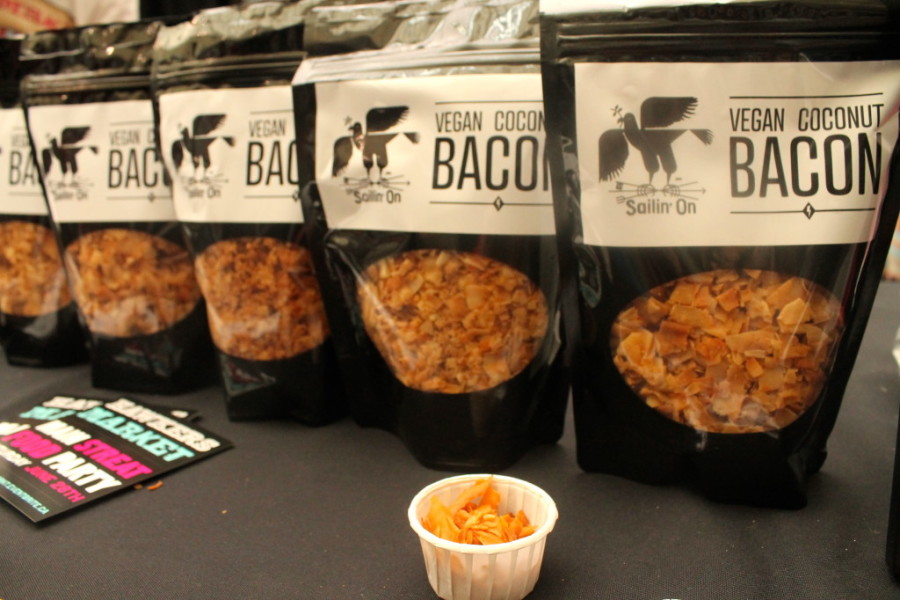 Yeah, I know, it sounds crazy. Vegan bacon? Yup. It’s delicious and addictive, too, even if you aren’t a vegan. Sailin’ On, Edmonton’s one and only Vegan Food Truck, uses this stuff in their sandwiches and wraps, and it became so popular, they are packaging it. It’s made with a base of coconut chips, and then is infused with mapely-smokey goodness. I dare you not to eat the whole bag in one sitting.

Quinoa is awesome. Not only is it gluten-free, but it is full of protein, so many new products are coming out that use it as the star. These chips have a fluffy, crispy texture (although they are vegan), and come in 4 varieties: Chili and Fresh Lime, Sour Cream and Chives (not vegan), Sundried Tomato, and Hot & Spicy. 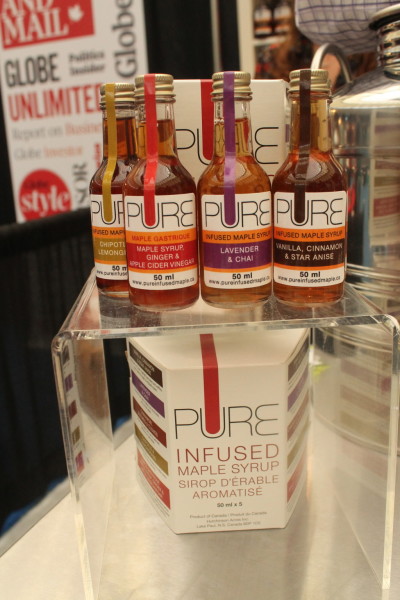 This wins my pick for the best new product at the show. The maple syrup is harvested from Nova Scotia, and then infused with combinations of ingredients for both sweet and savoury outcomes. They include: Vanilla, Cinnamon and Star Anise, Cinnamon, Nutmeg and Cloves, Chipotle and Lemongrass, and my favourite, Lavender and Chai. There’s also a Maple Gastrique, which is a combination of maple syrup, apple cider vinegar and ginger, which would absolutely rock in salad dressings. The sweeter varieties would be amazing for jazzing up your morning waffles, drizzling on ice cream, or as sweetener for your next apple pie or fruit crumble. The savoury maple syrups would add a ton of dimension to grilled salmon or chicken.

EAT! Vancouver is on now until Sunday evening at BC Place Stadium. Get down there and try for yourself.