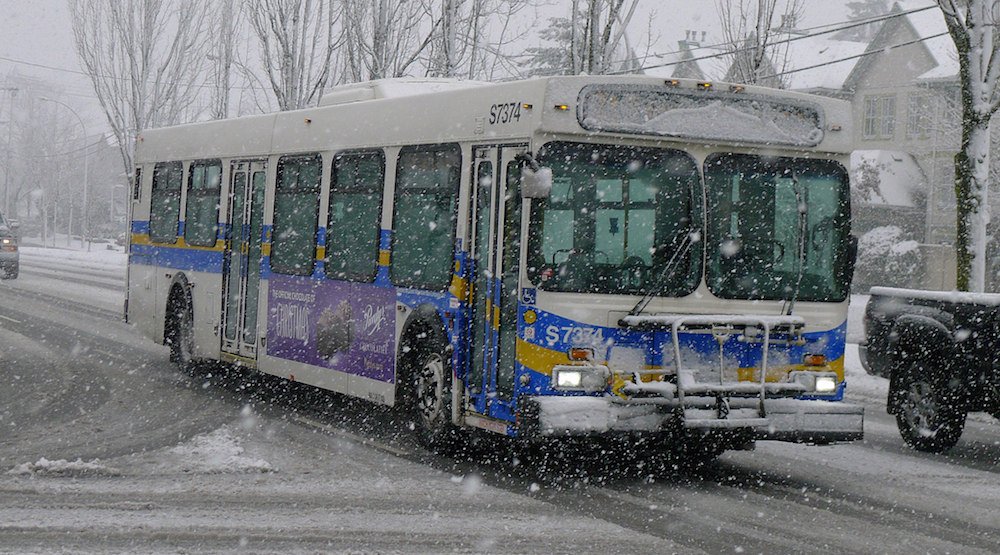 Despite our best West Coast efforts, a snowy winter has arrived in Metro Vancouver.

And it looks like this is just the beginning because there is another dumping of the white stuff forecasted to hit before the week is out.

That means lots of extra safety and operational procedures to keep the transit system running smoothly and safely.

Remember that buses can only go as the traffic allows. Be sure to check your municipality’s website for snow removal schedules and give yourself some extra time for your transit trip.

Here are six things that TransLink is doing to prepare for the winter weather:

Trolley de-icer trucks: TransLink will deploy to spray the entire trolley overhead system if there is a forecast risk of frost or ice.

SkyTrain de-icing: De-icer spray trains are used to keep the power rail free of ice. De-icing stations will be set up in covered areas and tunnels to prevent ice and snow compacts on the trains. During times of overnight snow, some SkyTrain cars will run throughout the night to keep tracks clear.

Additional bus tire traction: Operators have a snow/ice switch which gives the bus tires better traction in the snow.

Bus switch outs: If needed, TransLink will switch out the long articulated buses for traditional buses. Although articulated buses are great for turning and maneuvering throughout our streets in Metro Vancouver and allow for quick movement of large numbers of passengers, when travelling up hills or on streets that have poor conditions, the back halves are heavy which can create some traction problems.

Canada Line anti-icing and sanding: This ensures the power rail and tracks are clear of ice. Canada Line cars have a braking system similar to ABS brakes on your vehicle which helps avoid slippage in this weather.

Extra staff on transit: Extra staff including SkyTrian Attendants and Transit Police will assist customers in getting where they need to go. HandyDART will send two staff out in each vehicle to ensure customers get safely to their door, and assist in digging out the bus if required

Know before you go.

If there’s snow or ice, ensure you plan ahead with Trip Planner or m.translink.ca on your mobile device, and make sure to allow yourself extra commuting time.