Vancouver has been home to many incredible murals over the years. Sadly, due to fire, demolition and vandalism, only a few of the city’s older works have survived the years.

During their historical walking tours, Forbidden Vancouver storytellers are often asked about vintage murals. Though several have moved from their original locations, the following six pieces are a few of their favourites and fantastic examples of vintage Vancouver murals that can still be seen today. 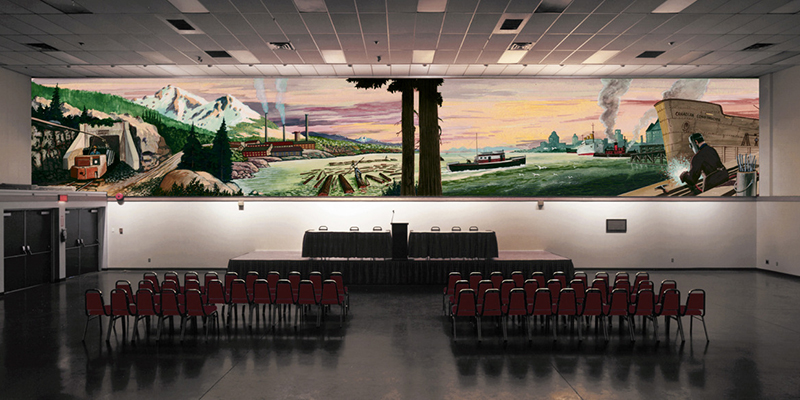 Mural artist Fraser Wilson was a top illustrator and cartoonist in the city in the 1930s and 1940s. He worked for left-leaning newspaper The Commonwealth and the Vancouver Sun.

Originally installed in Pender Auditorium of the Maine Workers and Boilermakers Hall at 339 West Pender, the mural was moved to the Maritime Labour Centre at Victoria and Triumph streets in the mid-1980s.

As the mural had been painted directly onto the gyproc, the move was a painstaking process. In order to fit the nearly 100 foot long mural into its new home, it had to be shortened to 85 feet.

The original artist, then 83 years old, returned to paint transition scenes to compensate for missing panels removed in the shortening process. Wilson also re-dedicated the mural in its new home on January 22, 1988.

It is considered one of his most significant works.

The mural has been threatened several times. At one point it was nearly painted over and, had it not been moved from its original home Pender Auditorium, which burned to the ground in July 2003, the mural would have been destroyed. Its current home has been hit by arson several times in recent years, but the mural has survived! 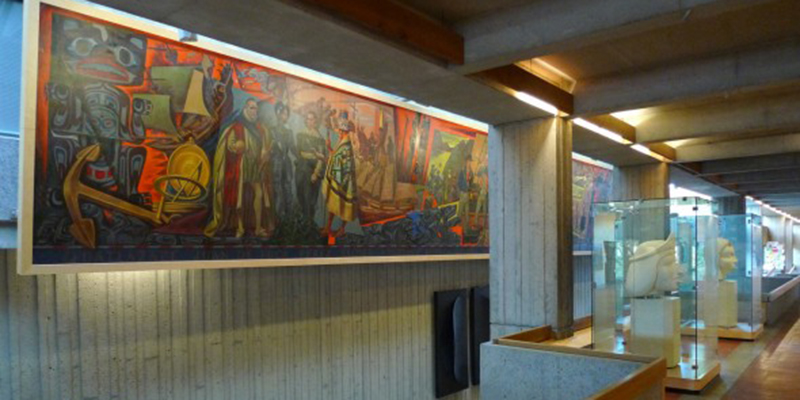 The centre of the mural features a plaque with a quote from Captain George Vancouver:

“‘…The shores of this channel, which, after Sir Harry Burrard of the Navy, I have distinguished by the name of Burrard’s Channel.’ George Vancouver, Captain, R.N. 14th June, 1792”

Commissioned by TD Bank, B.C. Pageant was painted onsite at TD’s Granville and Pender branch at 499 Granville Street. The building itself was created by architects McCarter and Nairne, who also designed iconic local structures such as the Marine Building.

The building was closed in 2002 and, in 2004, the mural was donated to Simon Fraser University. At the time, the work was stained with grime and smoke. The mural was restored thanks to donations of $50,000 from Allen Lambert’s family and $25,000 from TD Bank Financial Group. The piece is now located outside SFU’s Robert C. Brown Hall at the northwest corner of the Quadrangle. 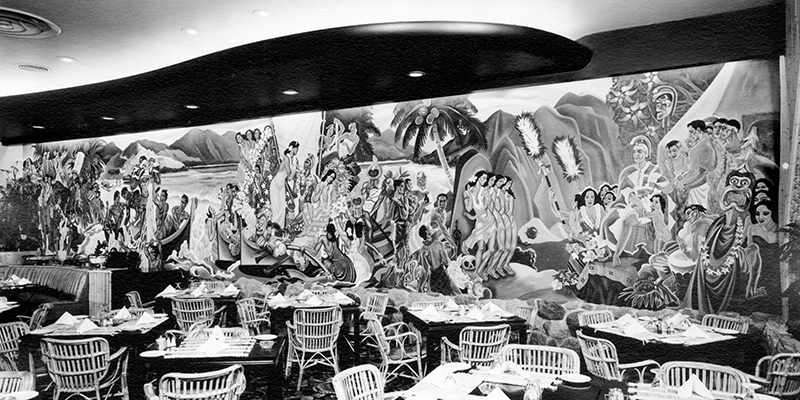 After the Second World War, a tiki craze swept North America. Hawaii was accepted as a state, WWII soldiers stationed in the Pacific returned home and musicals and movies such as “South Pacific” gained in popularity.

In 1953, Waldorf Hotel owner Bob Mills took a trip to Honolulu, Hawaii where he bought eight black velvet paintings by artist Edgar Leeteg. His wife didn’t like them, so he used them as inspiration for his business instead and decided to create a Tahitian cocktail lounge in Vancouver.

By 1955, Mill had transformed the Waldorf Hotel – located at 1489 Hastings Street East – into a tiki-themed bar and hotel. The building itself – designed in the modernist style by architects Mercer & Mercer – was constructed in 1947.

In 1957, Mills hired artist Peter Hopkinson to paint a Polynesian mural in the Waldorf’s basement level bar. Hopkinson stayed in the hotel while he created the piece.

The mural was inspired by a 1950s set of nine murals by artist Eugene Savage of Indiana – titled “History of Hawaii” – located on the cruise ship SS Lurline, which toured between Vancouver, Seattle and Hawaii.

The mural was restored in the 1980s as a key feature of the hotel’s well-preserved theme bar. The Waldorf now contains the oldest surviving Polynesian “Tiki” rooms in Western Canada. In 2013, it made it onto Heritage Vancouver’s Top 10 Endangered Sites list. 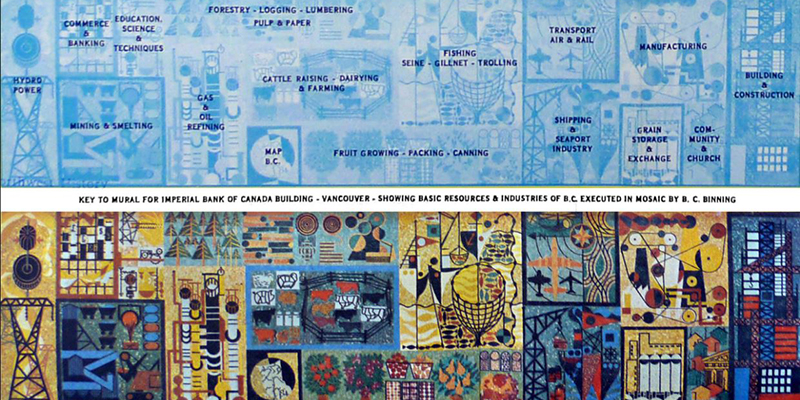 Installed in the Canadian Imperial Bank at 586 Granville Street in 1958, B.C. Beginning is a seminal work by artist Bertram Charles Binning.

Made of 200,000 individual pieces of Venetian glass, the mural is a staggering 13 by 44 foot work of geometric form and line in earthy colours. Binning spent four months in Venice overseeing the mural’s preparation.

A brochure about the mural in the Vancouver Public Library’s Special Collections (N.W. 971.133 V22i Pam) provides some insight into Binning’s inspiration.

“When Mr. Binning began to plan his work he felt that to depict the resources and industries of British Columbia in descriptive and literal terms seemed crass and inadequate to the spirit he had in mind. What he ultimately decided to attempt was to identify the theme, using some sort of readable iconography, or symbolism, and then enrich this language with all the colour, texture, pattern and general aesthetic excitement at his command.”

The piece is characteristic of Binning’s work. He’s also known for the outdoor tilework on the old B.C. Hydro Building – built in 1957 – which is now home to Burrard’s Electra Suites.

The CIBC building which housed the mural has since become a Shoppers Drug Mart. The piece itself is located on the upper wall opposite the entrance. 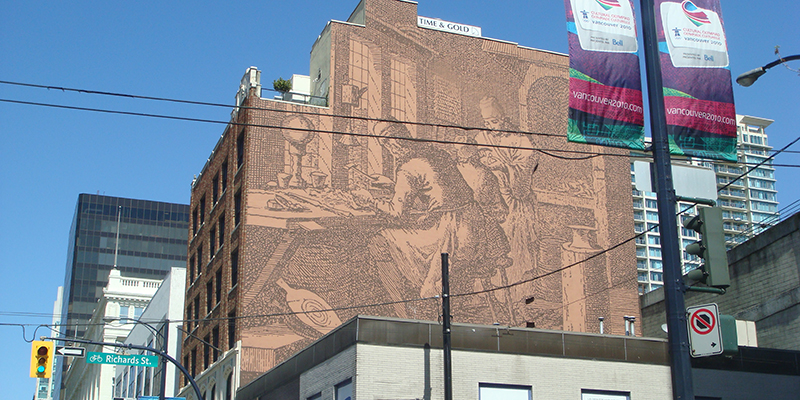 One of the city’s most photographed murals proudly occupies the side of the Randall Building at 535 West Georgia Street.

Brokerage firm S W Randall Co. had the building constructed in 1929. Its design features elements of both gothic and Art Deco architecture.

In 1991, the Randall Building was upgraded by jeweller Toni Cavelti.

Installed in 1993, shortly after the building’s renovations, the mural depicts medieval-era master goldsmiths instructing apprentices. It was created by artists Kitty Mykka and Nicole Kozakiewkz.

The mural was restored in 2005 by original artist Mykka in conjunction with Lance Belanger. 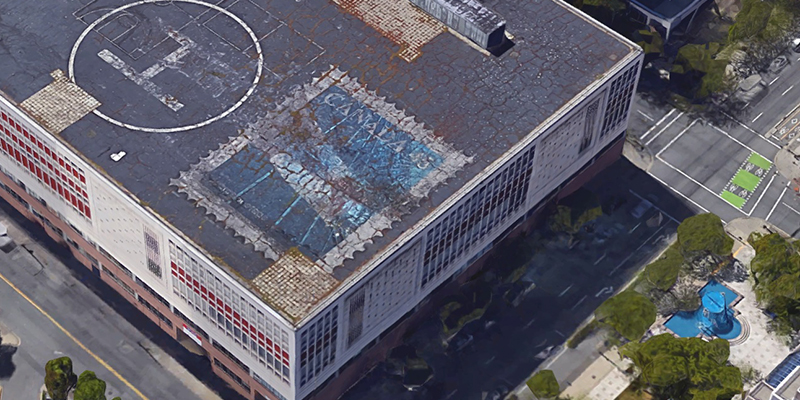 Originally featuring a colourful depiction of the Canadian flag, the mural has since cracked and faded to a soft blue.

The building, designed in the mid-century style, opened in 1958. Initially, it was surrounded by other buildings of similar design. Now the Canada Post building stands out from its neighbours.

It was sold in January 2013 to B.C. Investment Management Corporation after a new processing facility opened in Richmond.

In addition to the postage stamp mural, the building’s roof also features a basketball court and helipad.