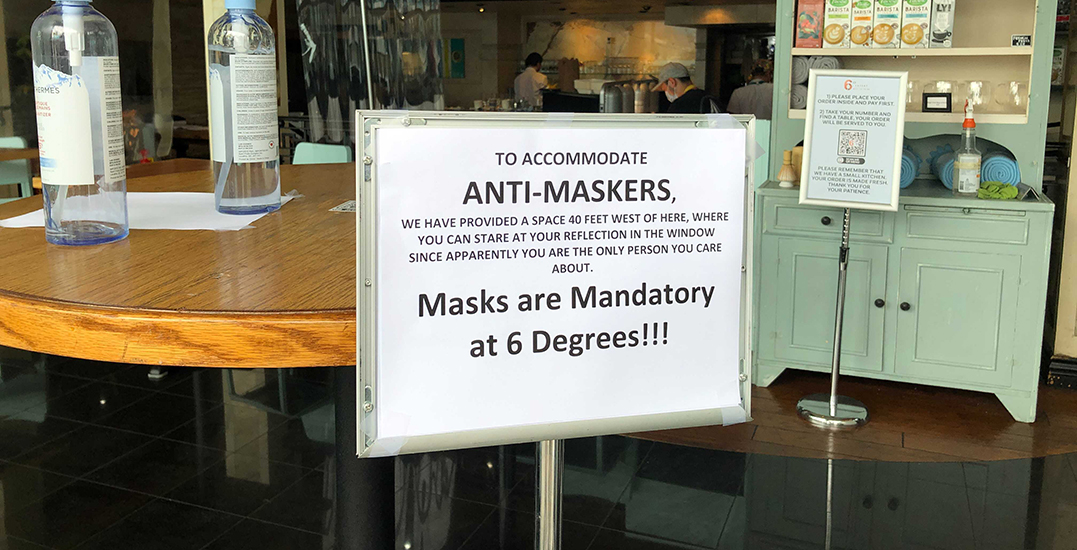 6 Degrees Eatery, a breakfast and brunch spot in Vancouver’s Coal Harbour, is catching attention for its unapologetic signs surrounding its mandatory mask policy and anti-maskers.

Iain Bell, who co-owns the restaurant alongside Karen Ho, tells Daily Hive that the signs were put up on Tuesday outside of the restaurant.

He explains that the restaurant and staff were becoming “a little frustrated” with customers not respecting general signage, which asked them to wear face masks.

“I thought, let’s have some fun with it,” Bell tells Daily Hive. “Googled silly signs and picked a couple — I can’t lay claim to the wording.”

One of the signs placed outside the restaurant explains that masks are mandatory for all patrons. It also, however, points out a space designated for any visitors that aren’t willing to wear a facial covering.

“To accommodate anti-maskers, we have provided a space 40 feet west of here, where you can stare at your reflection in the window,” the sign reads.

“Since apparently, you are the only person you care about. Masks are mandatory at 6 Degrees!!!” 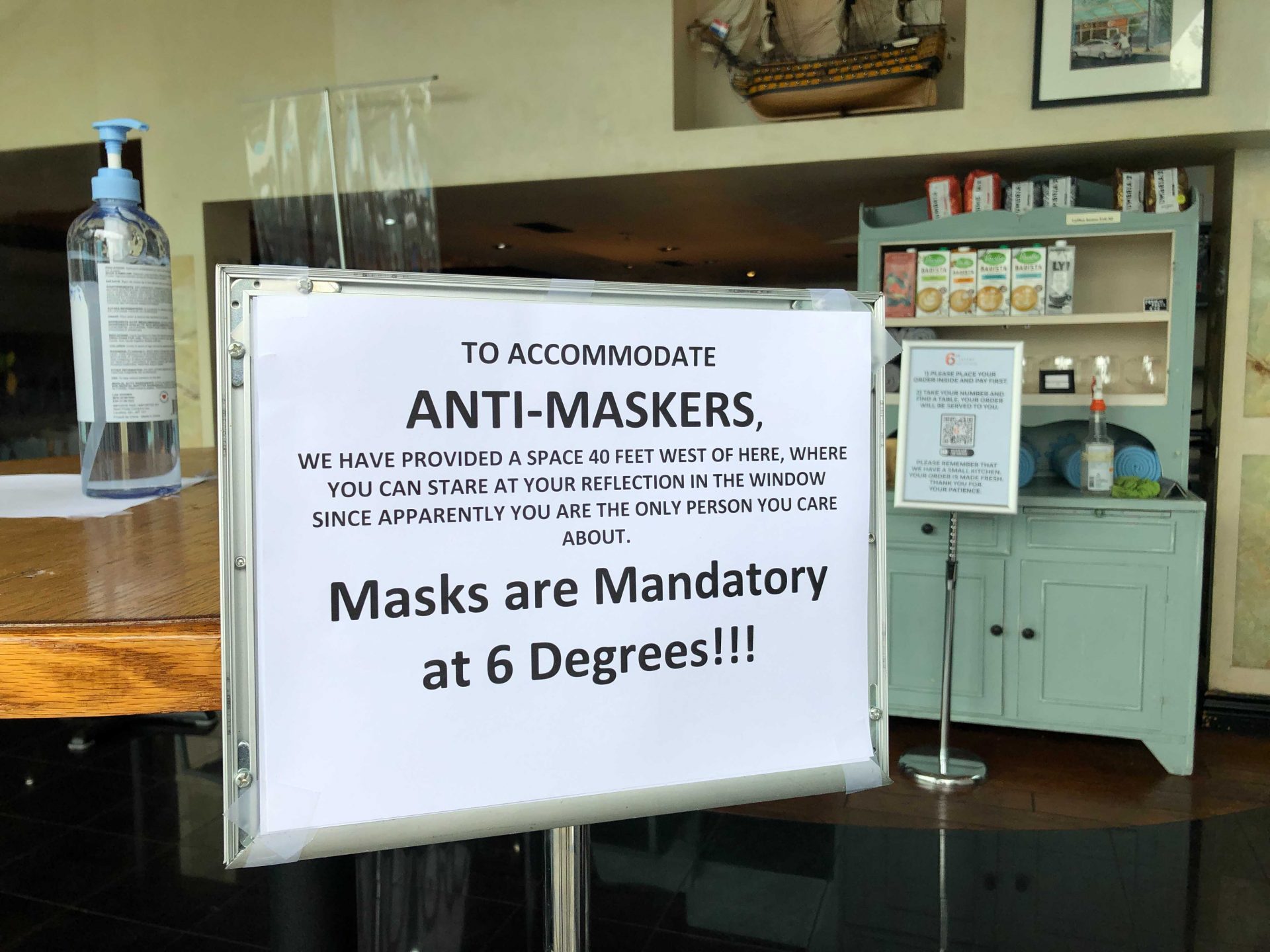 Another one posted outside the restaurant says that anyone entering without a mask will need to have their temperature taken.

“P.S. We only have rectal thermometers! No Mask… No service.” 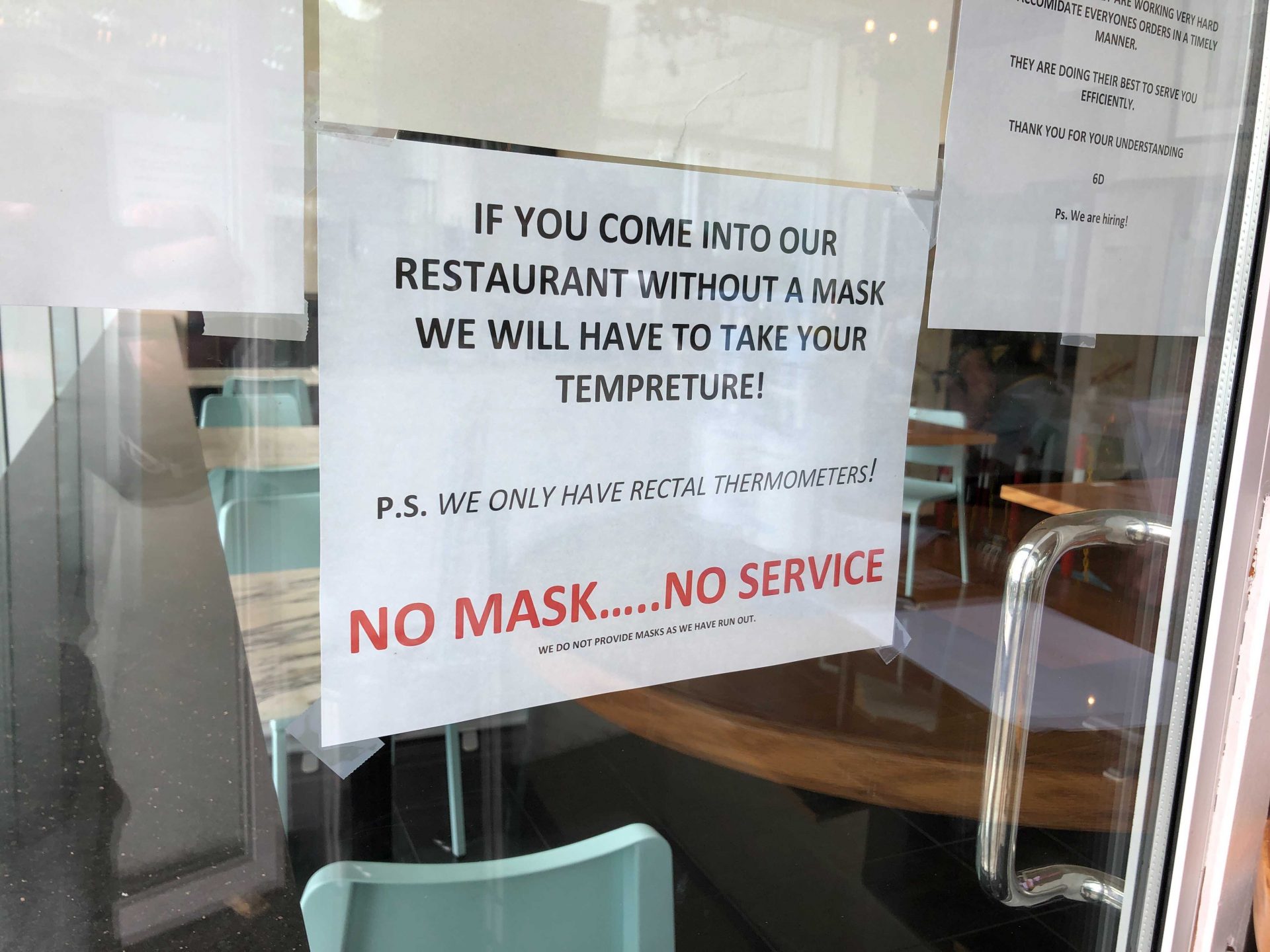 Bell says that so far, the general response has been “very positive, with chuckles coming from the lineup and, surprisingly enough, the masks materialize and are worn.”

While they’re fully expecting to receive negative feedback, they haven’t yet received any.

“I’m sure there will be, as not everyone respects the wishes of a private business,” he explains. “We are not finished with COVID-19, so until it has been officially sipped out, Karen and I will continue to protect our staff and our customs, whether they like it or not.”

6 Degrees Eatery is just one of several businesses in Vancouver that has opted to keep a mandatory mask policy as BC enters Step 3 of its COVID-19 restart plan.

Bosley’s at Columbia Square Plaza in New Westminster is another example. And in late July, the store owner stepped forward to share some of the hostile behaviour that she and her employees had dealt with due to the store’s mask policy.