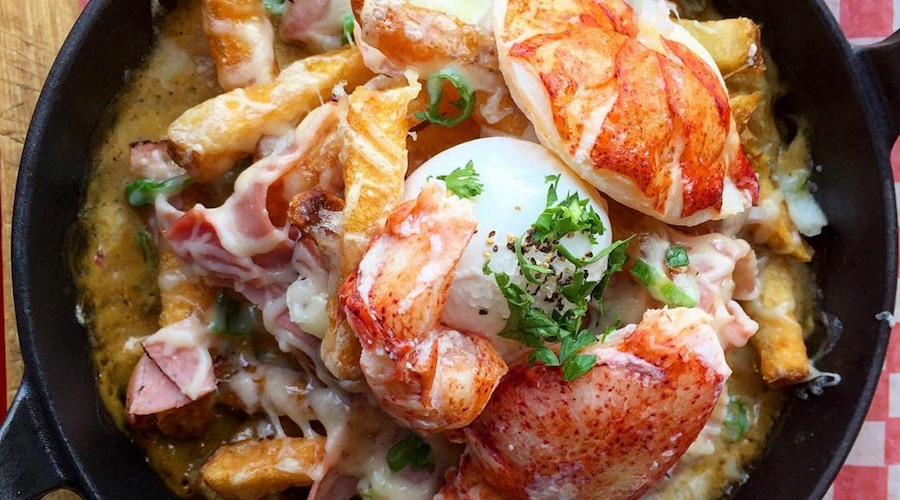 Poutine may be the ultimate Canadian bar food, but if you serve it up in the morning and add some eggs and more creative toppings, you’ve got the makings for a breakfast of champions.

Linh Café melds together the culinary traditions of France and Vietnam, but when it comes to their Poutine Breakfast dish, things get all sorts of Canadian. Hand cut fries are topped with Swiss cheese, black forest ham, peppercorn gravy, and a poached egg. Not enough for you? Add half a butter poached lobster. Whoa!

A favourite on Davie Street for their extensive menu of traditional and wacky poutine options, La Belle Patate also makes a Breakfast Poutine (available all the time) which comes with bacon, eggs, and onion.

Head to this popular downtown Vancouver pub for brunch and you’ll find some serious grub, including their Feature Breakfast Poutine. The hearty wake-you-up dish comes with braised beef, demi-glaze, caramelized onions, bacon, and a poached egg.

While the Wallflower Modern Diner is known for being a haven for vegans and vegetarians, they still manage to turn out some meaty fare for the omnivores. Their Breakfast Poutine features hash browns piled high with two poached eggs, cheese curds, bacon, and chicken gravy. PS, they serve breakfast daily until 4 pm, so procrastinators welcome!

Breakfast Poutine at The Portly Chef

Head across to the North Shore to The Portly Chef for their brunch offerings, which include a loaded Breakfast Poutine on pomme frites, topped with two poached eggs, peppercorn gravy, cheese curd fondue, pickled red onions, and their “what what” sauce.