Just how fast is 5G?

While many in Canada are standing by to find out, recent analytics from mobile insight firm Opensignal helps to deliver some solid indicators of what the next generation of wireless service could offer.

South Korea, which saw the first large-scale 5G smartphone launch anywhere globally, recently saw the first full-scale implementation of 5G technology. And the results were speed and more speed. Testing under 5G found an average download speed reported as 111.8 MBps, or 48% better than users using “4G flagship smartphones,” and 134% higher than other 4G smartphone users, according to the new report from Opensignal.

Yonhap News Agency reported that 5G subscribers are most keen to sign up because of equipment purposes (aka having a FOMO when it comes to the latest cool tech gear), and the South Korean government said 900,000 consumers were currently on board in the 5G space. Samsung solidified the first “true rollout of 5G” using the Galaxy S10 5G. And last month, the company said it has sold more than one million units of the Galaxy S10 5G in South Korea, and did so within 80 days following its launch. Apparently, 15,000 Galaxy S10 5G phones were sold per day.

The Galaxy S10 comes in four types and its 5G model was released back in April. Samsung is expected to release its new phablet, the Galaxy Note 10, in two sizes for 5G models come August. But the phablet will only support 5G in the domestic market, reports the news agency.

In the US testing of 5G service began in two cities: Chicago and Minneapolis with Verizon releasing the first 5G smartphone, the Moto Z3, and 5G connectivity being tapped as an add-on feature. The US’s Opensignal users experienced a max speed of as high as 1.2 Gbps, while Korea’s max speed seen to date is 988 Mbps, or 8.8 times as fast as users’ average “real world speeds” of 111.8 Mbps.

Note: The maximum speeds are not the average speeds. The speed is also measured against “normal content delivery networks, not special test servers.”

In Korea, the phones used in the Opensignal analysis were either the Samsung S10 5G or the LG V50 ThinQ 5G. And a designated “4G flagship smartphone” from the two brands was either the Samsung S9, S9+, Note 9, S10e, S10, S10+ as well as the LG G7 range, V40, and G8. Models from both 2018 and 2019 were measured. Also interesting is since the launch of the LG V50 ThinQ 5G in May, the company has reported that 280,000 units have been sold, this in comparison to Samsung’s million units figure.

“We simply measure the real-world experience of users to see if one service delivers a better or worse experience than another,” notes the report. “And for real 5G New Radio (NR) there are metrics where we see no change in user’s experience.”

Opensignal also says they are “not distracted by technology claims around 5G” and real-world measurements are the only way to test the expansive nature of 5G compatibility and speed. As markets become more sophisticated and deploy 5G the metrics will continue to be measured and improved. Even now the latency and upload speeds are similar. Download wise 5G is showing to have a faster metric.

“This upload and latency finding is what Opensignal would expect at this early stage of the 5G era because initial 5G technology does not yet seek to improve either characteristic,” notes the report. Basically, we shouldn’t take the upload speed and latency into consideration too much as only the speed of a download is what has been focused on. 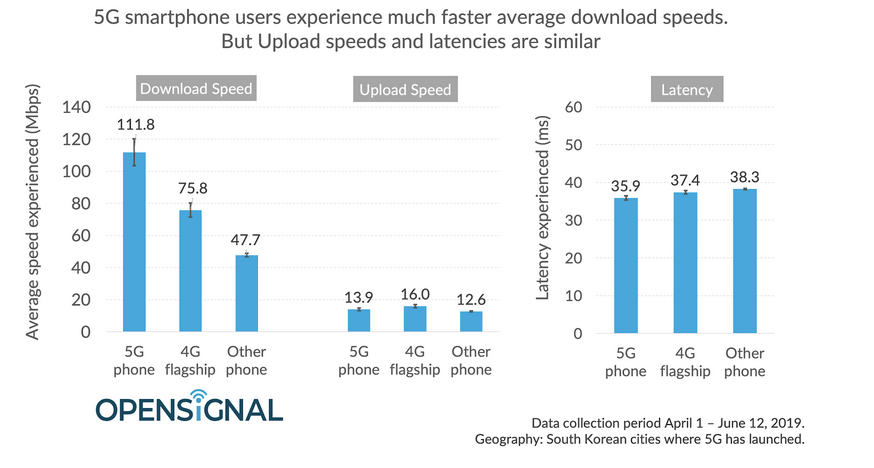 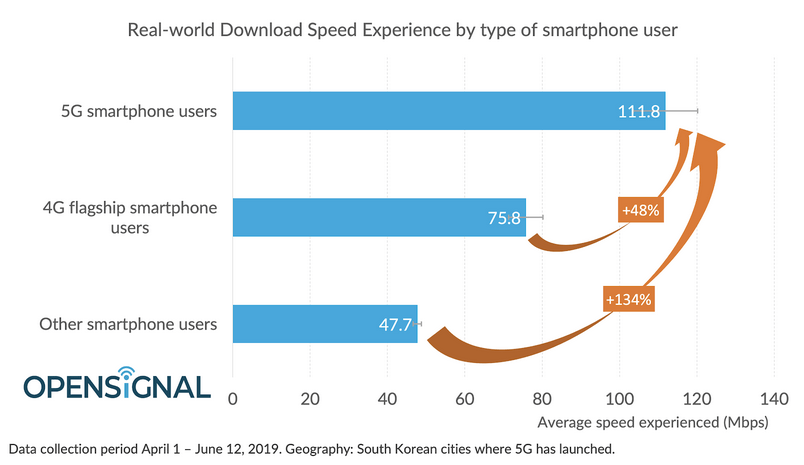 As of now 5G smartphone users connect to a 4G spectrum band and a 5G New Radio (NR) band at the same time, dubbed as Non-Standalone Access mode. 5G is being used for “raw download bandwidth” and the 4G serves in relation to the network. Again, it’s all about the download speed currently.

The 5G phones released to date include the Samsung Galaxy S10 5G, the LG ThinQ 5G, Motorola’s 5G Moto Mod which supports the Moto Z3 and the new Moto Z4. The Moto Z3 and Z4 tap into the 5G network only via Verizon.