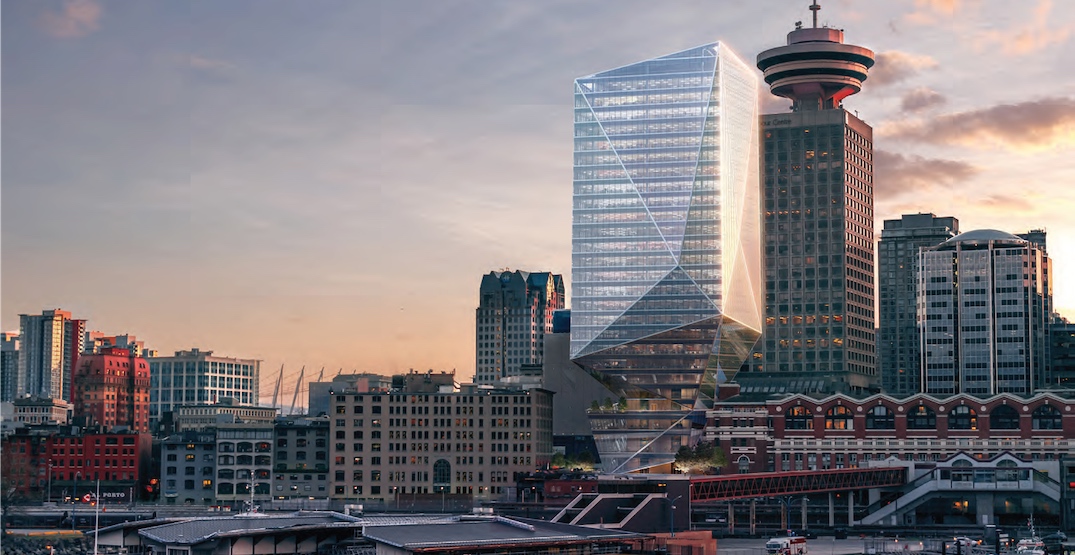 The proposal to add a 376-ft-tall, 26-storey office tower on the footprint of the surface parking lot immediately east of Waterfront Station in downtown Vancouver has stalled again.

Last week, Cadillac Fairview requested the City of Vancouver’s Development Permit Board to postpone the permitting process for The Crystal tower at 555 West Cordova Street until further notice.

Another round of public consultation was conducted over the last few weeks, and the development permit board meeting to determine the project, scheduled for March 22, 2021, has just been cancelled. In an email to Daily Hive Urbanized, a spokesperson for Cadillac Fairview said they are “in discussions with city officials regarding the ongoing approval process.”

The proposal was relaunched in January 2020 when a revised development application was submitted, with the tower footprint — compared to the original proposal in 2014 — shifted to the northwest towards the rear of the parking lot and away from West Cordova Street. The base of the tower was also altered to improve its compatibility with the public realm.

The development permit board meeting was originally scheduled for May 2020, but it was cancelled due to COVID-19. Prior to the pandemic, they were aiming to start construction as early as the end of 2020. 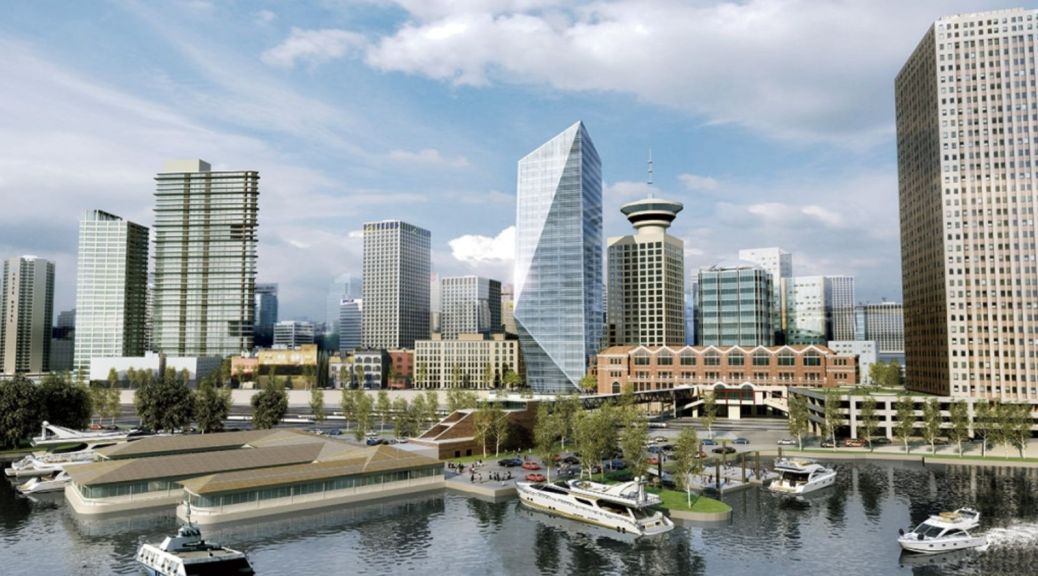 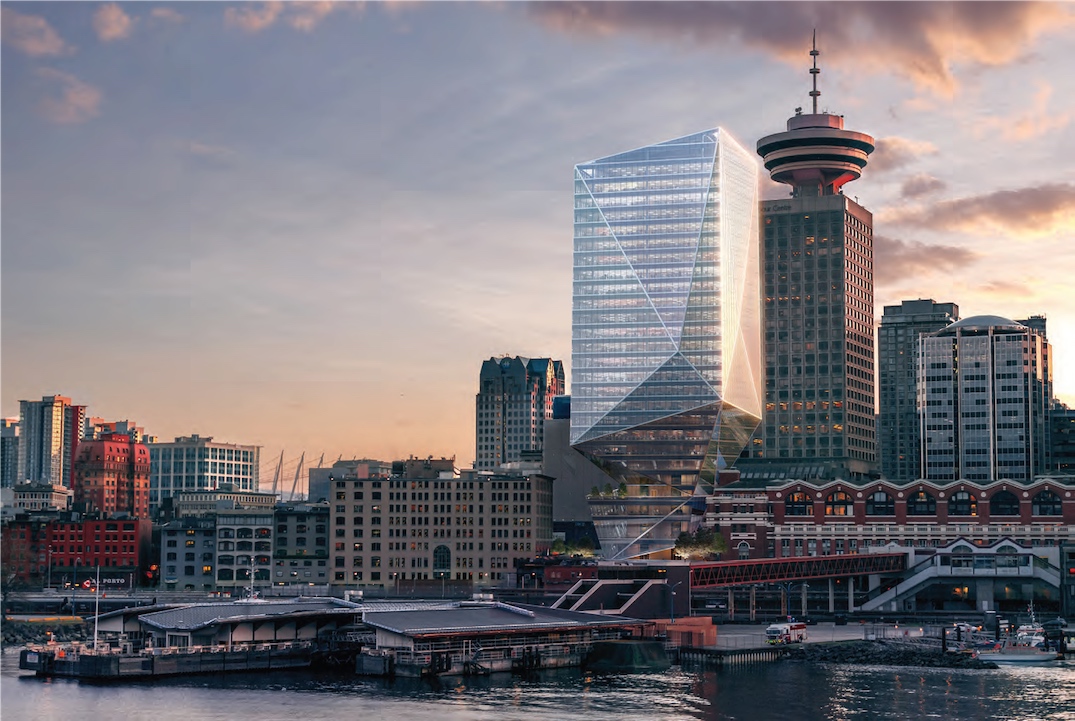 However, vocal opponents of the project, including a group concerned that it would block their mountain and harbour views from their space within Harbour Centre, continue to perceive the irregularly-shaped glass tower as too tall and a mismatch with the area’s heritage character — even though the site is right next to the region’s principle transit hub, and outside the boundaries of Gastown.

There will be 530,000 sq. ft. of office space within the tower, enough to accommodate up to 2,500 office workers. Proponents are targeting WELL Platinum healthy workspace and LEED Platinum green building certifications.

Zero parking stalls will be provided in the tower due to the site’s unique constraints, but this will encourage more office workers and visitors to use public transit. 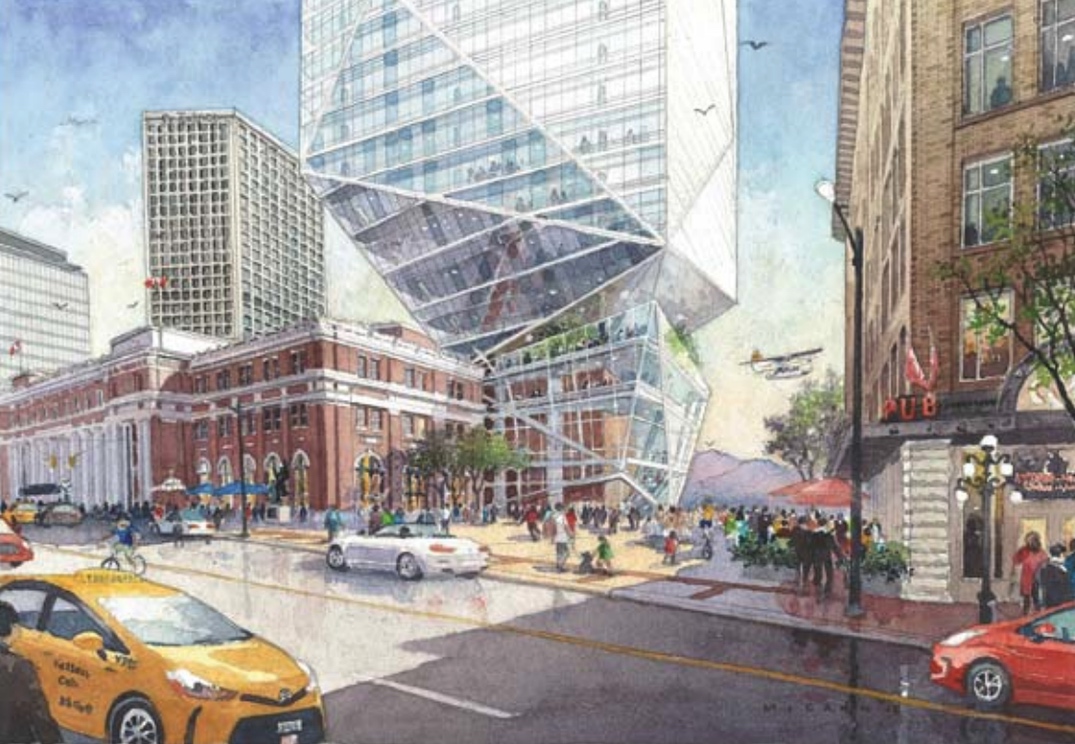 Moreover, opponents are now also taking issue with the possibility the tower could interfere with the future transit concourse addition to the north side of Waterfront Station, although The Crystal aligns with the municipal government’s 2009 Central Waterfront Hub concept for the area that calls for an office building development on a portion of the parking lot.

Additionally, critics have made a new call to create a large public plaza to preserve northward views, instead of permitting the tower. However, the reconfigured tower footprint in the revised design allows for 85% of the parking lot to be used as a public plaza. 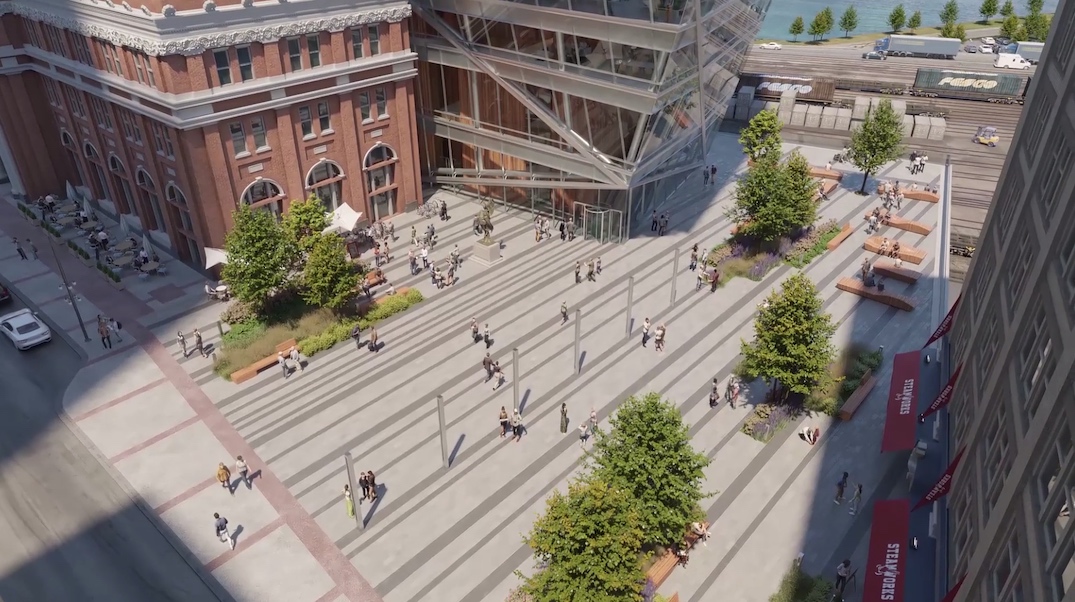 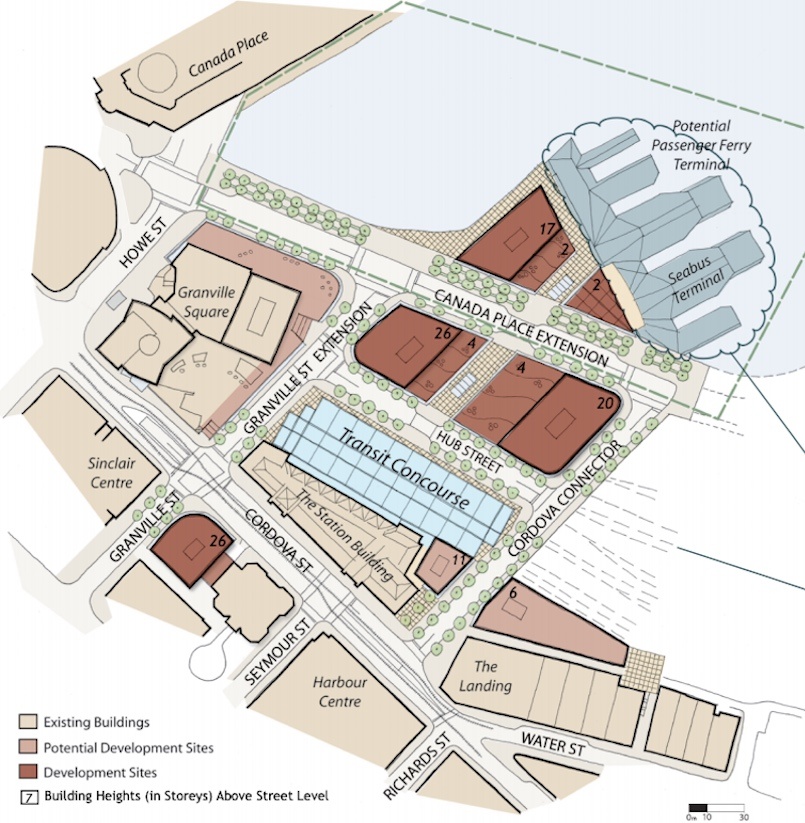 Layout of the Central Waterfront Hub Framework in downtown Vancouver. The site of 555 West Cordova Street is labelled as No. 11. (City of Vancouver)

Any public plaza in this area would be temporary in size as a portion of the plaza’s footprint is needed for a future north-south access road into the office tower developments and bus exchange north of the transit concourse, which would in turn also block any views “preserved” by the plaza.

The Central Waterfront Hub framework calls for a continuation of Canada Place Way, the extension of the seawall, and public plazas closer to the water that would offer and more superior permanent vantage points of the mountains and harbour.

Cadillac Fairview owns not only the parking lot in the area, but the heritage Canadian Pacific Railway building that contains TransLink’s Waterfront Station hub, and the Granville Square and PricewaterhouseCoopers Place office towers to the west. 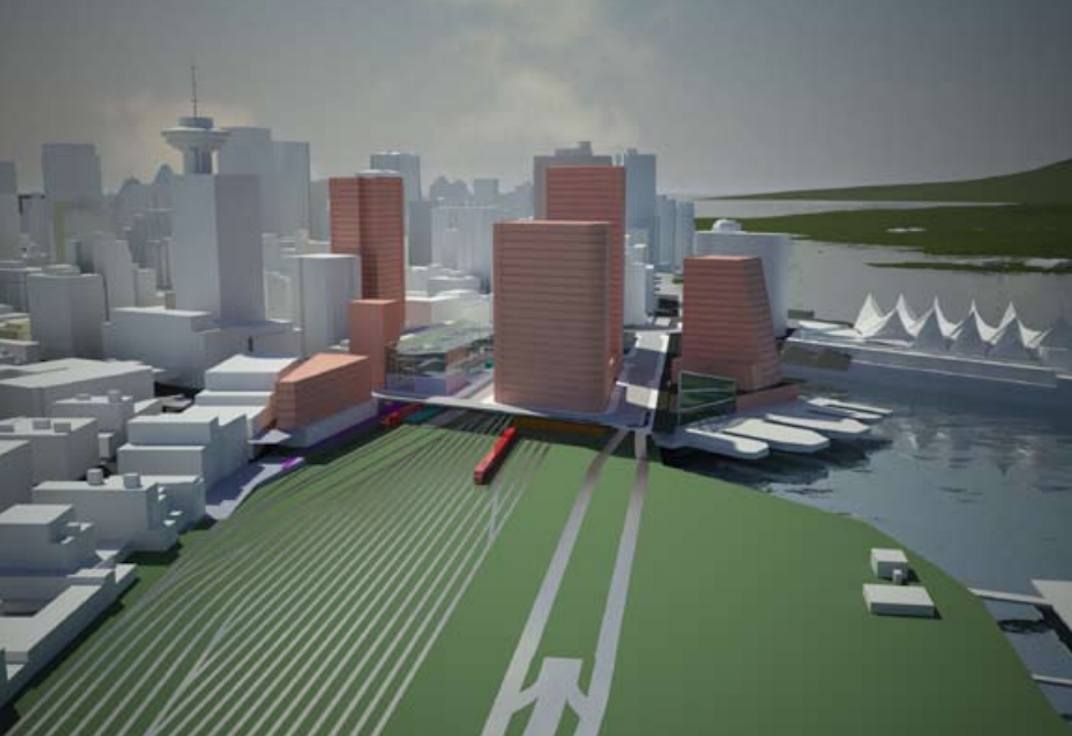 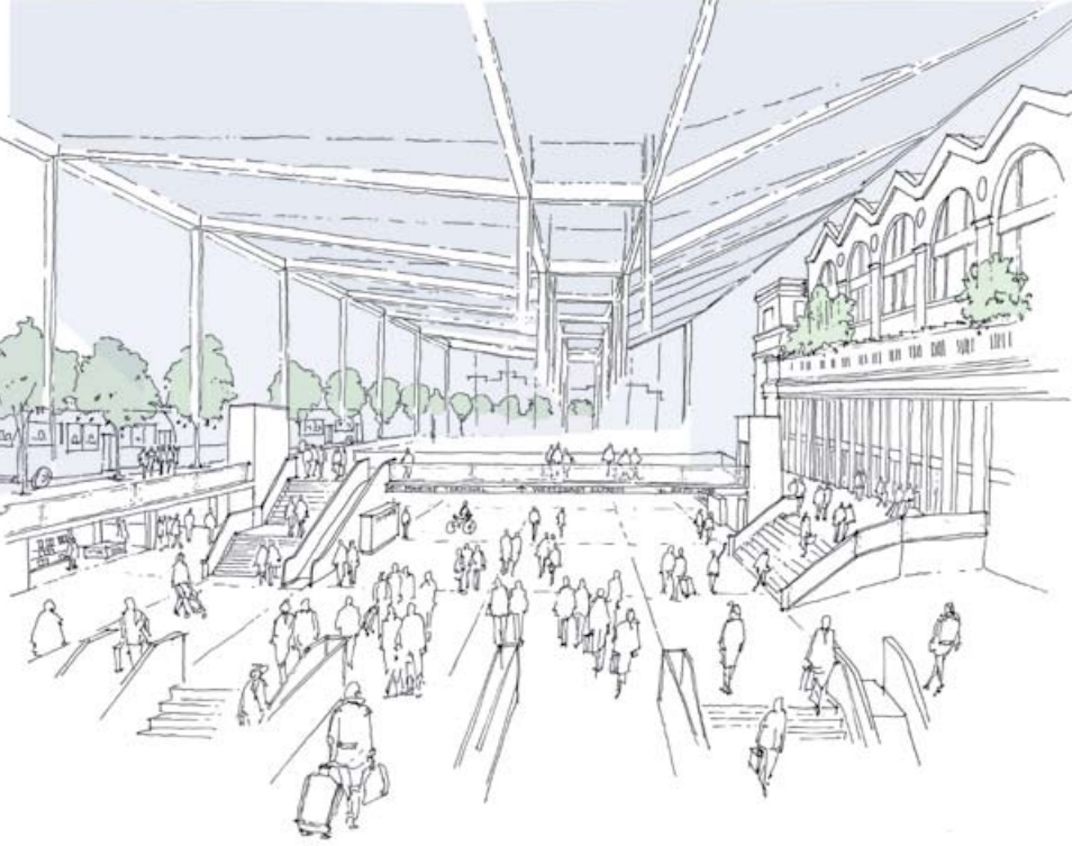