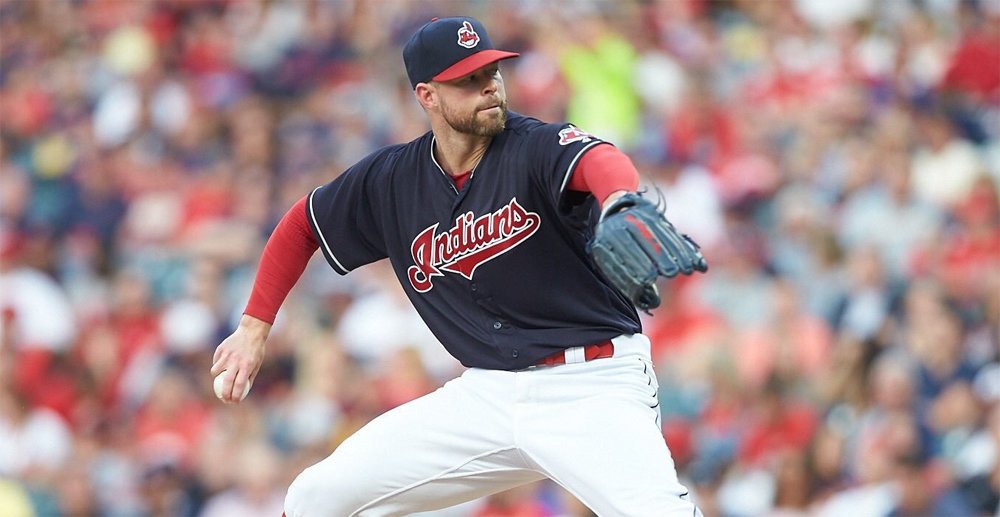 The Toronto Blue Jays kicked off their pursuit for starting pitching earlier this week by acquiring Chase Anderson from the Milwaukee Brewers. While Anderson is a decent mid-rotation arm, the Blue Jays still have plenty of room for improvement in their rotation.

There are dozens of pitchers available on the free agent market if the Blue Jays choose to go that route, but as they’ve already demonstrated, the Jays also have the ability to make an impact on the trade market.

If the front office prefers not to make a big splash in free agency, packaging some position players and/or prospects is another way the Blue Jays could beef up their starting pitching depth this winter.

Here are five attractive arms on the trade market that Jays GM Ross Atkins should target this offseason.

The Cleveland connections to the Toronto Blue Jays are well documented, and trading for the Tribe’s ace pitcher would be another coup for Mark Shapiro and Ross Atkins.

Corey Kluber was limited to only seven starts last year, but his resume speaks for itself; two Cy Young Awards over the last six seasons, three All-Star Game selections and some of the best numbers in the American League among all starting pitchers.

Even at age 34, when healthy, Kluber is one of the elite pitchers within the American League. The Blue Jays haven’t had top rotation talent like that since they traded for David Price at the 2015 trade deadline.

The only caveat that comes with a potential Kluber deal is he’s only under contract for the next two seasons. The Blue Jays have the position player building blocks to become a contender, but bringing in a Cy Young pitcher like Kluber would fast-track their path to success in the AL East.

The odds of the Blue Jays and Chicago Cubs coming together on a Kyle Hendricks trade are extremely remote. The Cubs just inked the veteran lefty to a five-year, $55.5 million contract extension last year.

However, the Cubs are at a crossroads right now. After a disappointing season that saw them miss the playoffs for the first time since 2014 and fire their manager Joe Maddon, the Cubbies could be a team in transition.

One way to free up some payroll and bring in some top talent? Lining up a massing trade with the Blue Jays. Mind you, the Jays would pay through the nose in prospect capital (think Cavan Biggio and Lourdes Gurriel Jr. to start). Even at an astronomical asking price, it might be worth it for the Blue Jays to secure one of the National League’s best arms.

Entering his age-30 season, Hendricks is smack-dab in the prime of his career and under contract through the 2024 season. That falls right in line with the Blue Jays potential window for contention, and Hendricks could be one pitcher who might lead them back to the promised land.

Similar to Kyle Hendricks, German Marquez re-upped with his team earlier this season, signing a five-year, $55 million extension with the Colorado Rockies through the 2023 season. There’s also a $16 million club option for the 2024.

It’s difficult to see the Rockies parting with their number one starting pitcher, but there’s a lot of upside to Marquez since he’s only 24 years old. Considering that he pitched half his games at Coors Field, the right-hander posted impressive numbers in 2019.

Again, this is a case where the Blue Jays would have to empty their cupboard of prospects or big league level players, which is a price any team would be leery to pay. But if the Rockies were motivated to move a pitcher like Marquez, the Blue Jays should be the first team in line to add him to their starting rotation.

With the Royals further behind in their rebuild process, they could be looking to offload some of their big-ticket contracts. Danny Duffy is slated to be the Royals second-highest player in 2020, making $15.25 million next season and $15.5 million the year after.

The Blue Jays have a clear need for veteran starting pitching and the Royals could afford to trim some payroll … so why not swing a deal for Duffy? He posted better-than-average numbers across the board in 2019, and his current deal takes him through to his age 32 season.

While the price for Hendricks, Marquez or Kluber might be too high in terms of prospect capital, this one could be just right for the Blue Jays. Joe Musgrove of the Pittsburgh Pirates is under team control for three more seasons with three years of arbitration remaining.

A 96 ERA+ in 2019 shows there’s some room for improvement, but the 170.1 innings logged this past season is an encouraging sign for a team like the Blue Jays who are starving for innings from their starting pitchers.

The Pittsburgh Pirates are an organization that aren’t afraid of swinging deals for pitchers (although, after watching Tyler Glasnow and Austin Meadows develop into studs with the Tampa Bay Rays, there may be some trepidation on their part to trade their young starters.)

Musgrove enters his age-27 season, which is right in the prime for starting pitchers. Combine his modest salary with the potential for growth and Musgrove might be a nice building block for a Blue Jays rotation beginning in 2020.