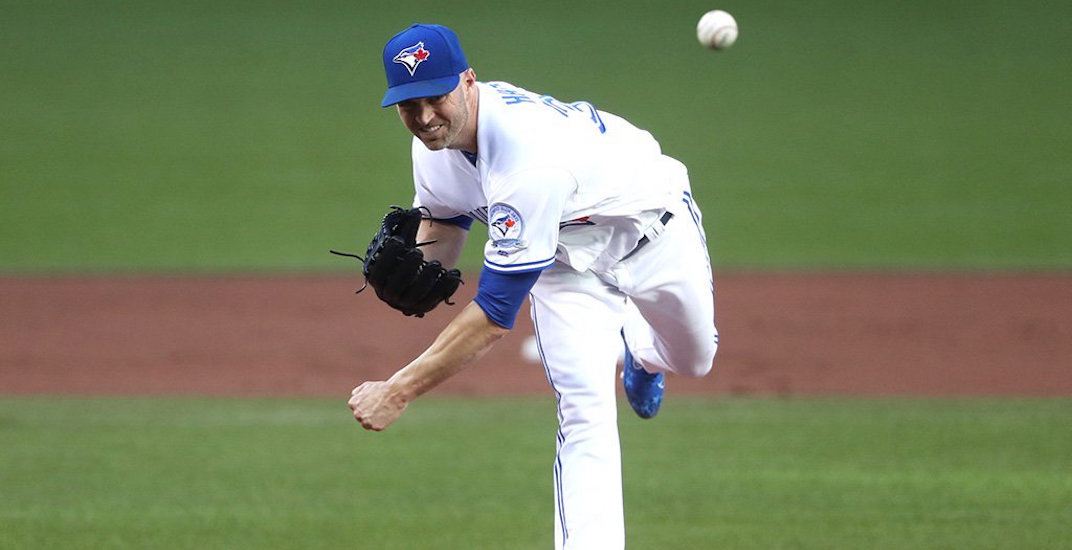 For the first time in five years, the Toronto Blue Jays will unequivocally be a seller at MLB’s non-waiver trade deadline.

They got the ball rolling already, by trading Steve Pearce to the Red Sox last month. That was likely the first of many more moves to come before July 31st.

With a slew of pending free agents on one-year deals, the Blue Jays will have contenders rummaging through their roster like a racoon enjoying an all-you-can-eat buffet the night before garbage day.

It’s not a question of if the Blue Jays will trade players off this roster, it’s how many. Here are the five most likely players to move off Toronto’s 25-man roster.

Only one @MLB pitcher has 4 starts this season with 8-plus strikeouts and zero walks.

His name is J.A. Happ. And he is very, very good. pic.twitter.com/tnLCHJbKYv

As the best starting pitcher on the trade block, J.A. Happ’s name has been mentioned for weeks now. Teams rumoured to be interested include the Yankees, Brewers, Cubs and Mariners.

Ideally, the Blue Jays should’ve traded him weeks ago, but as the sellers, they aren’t the ones making the calls with trade proposals; they’re the ones receiving the calls and contemplating the trade packages.

While he’s hit a bit of a rough patch over his last five starts – with a 6.84 ERA and seven home runs surrendered since June 20th – Happ’s still one of the most attractive arms out there for teams looking to bolster their starting rotation.

The 35-year-old lefty has flown under the radar when it comes to some of the most reliable starters in the American League. Nevertheless, Happ is a top-10 American League starter in ERA, WAR, and strikeouts since 2016.

He may not fetch as much on the trade market as he would’ve a few weeks ago, but surely the Blue Jays will trade their best pitcher on the roster in the coming weeks.

At the start of the year, the Blue Jays’ front office went out and signed a trio of former closers to compete for spots in their bullpen: Tyler Clippard, John Axford, and Seunghwan Oh. The latter of those arms looks to be the most attractive of the bunch.

Oh settled in as a late-game reliever for the Blue Jays as of late, owning a 2.82 ERA in 45 appearances for the Blue Jays. The former St. Louis Cardinals closer has been one of the most reliable arms out of the bullpen for John Gibbons this year.

Oh may not slot in as a closer for a contending team, but the 36-year-old certainly profiles as a solid setup man or seventh inning guy for playoff-bound clubs. With 53 strikeouts in 44.2 innings, he’s putting up more than a strikeout per inning out of the bullpen.

He’s also on a fairly modest $1.75 million deal for 2018 and has a very enticing option for the 2019 season at $2.5 million. If the prospective buyer likes what they see in Oh, they can bring him back on the cheap for 2019, which makes him arguably the Blue Jays’ most valuable trade chip out of the bullpen.

Essentially copy and paste most of what was said about Oh and apply it towards Tyler Clippard as well. With Roberto Osuna suspended until early August and Ryan Tepera on the disabled list, Clippard took over the closer role for the Blue Jays.

The 33-year-old has been a pleasant surprise for Toronto this year, posting a 3.15 ERA with six saves in 48 appearances this season. Similar to Oh, Clippard strikes out over a batter per inning of relief.

Clippard would be an interesting piece for a team in the playoff hunt because he isn’t the typical fireballer reliever. Instead, he relies on off-speed pitches to strike batters out, leaning heavily on his change-up.

Bringing aboard Clippard would provide a contending team with a different look out of the bullpen, something to contrast a high-velocity reliever in the back-end of their bullpen.

The Grandy Man CAN and just DID!@cgrand3 is the 2nd player in #BlueJays history to record 6 RBI in a game from the leadoff spot.https://t.co/yMd8nNiAuC @budcanada pic.twitter.com/b37Mjq8cIz

The Chicago Cubs are reportedly interested in adding left-handed outfielder Curtis Granderson, and for good reason. Not only is he revered for being a good ‘clubhouse guy,’ but the 15-year veteran has a wealth of experience to share.

Last year, the Dodgers acquired Granderson at the trade deadline, essentially as the left-handed half of a platoon on their outfield. A team like the Cubs would be doing the same, as Granderson has no business playing against left-handed pitchers.

His career .798 OPS against right-handed pitching gives a prospective contender a nice bat off the bench or someone who could start the odd game against a right-hander. At 37 years old, Granderson still has plenty of gas left in the tank to help a team win a World Series.

Aaron Loup is currently the longest-tenured Toronto Blue Jay, with seven years of experience playing in Toronto. However, that may change in the next few weeks.

At this point in his career, Loup is essentially a situational lefty who has the most success facing left-handed batters. In the past, John Gibbons has tried to stretch out Loup as a multi-out reliever, but if any team acquires him, it will be solely as a guy to get out lefties.

Every single contending team needs at least one decent left-handed reliever in their bullpen. Loup, 30, isn’t the sexiest name on the market in terms of lefty bullpen arms, but hitters own a career .613 OPS against him in 557 career plate appearances.

The Blue Jays probably won’t get very much in exchange for Loup, but he’s a pending free agent and the team would be wise to cash in now rather than let him walk away for nothing at all.