After the province announced more than 3,000 Syrian refugees will be landing in B.C. in the coming weeks, a local non-profit says they’re ready to take on the challenge.

Mosaic, a Vancouver-based organization that helps refugees settle and integrate into Canadian society, said they have the means to provide early settlement services for all of them.

“We’re ready to help them with their paperwork that might be required, we have staff, we have employment programs that are on the ground, we have parenting programs and we can link with schools,” Ninu Kang with Mosaic told Vancity Buzz.

“So these are things we’re gearing up for ourselves as an immigrant-serving organization.”

The influx of refugees to B.C. is part of Prime Minister Justin Trudeau’s plan to bring 25,000 displaced Syrians to Canada by December 31. The number of refugees to hit B.C. is a conservative estimate, since there will be an unknown number of private sponsors.

Kang said Vancouver only has the capacity to accommodate around 700 refugees with services that are currently available, so it might be up to the outlying municipalities to pitch in for when they initially land.

“Cities are going to have to look at what temporary housing they have. There is talks of using army barracks to house people, so that’s one strategy.”

But at the moment, that’s just what they are – talks. Kang said there’s no firm housing strategy in place from the Immigrant Services Society of B.C., but she suspects one will come in the coming weeks.

“It may be just too early for us to put out a strategy, but these are some of the things that people are meeting behind closed doors and meeting with each other to come up with these strategies.”

While details are still fuzzy, ISSBC created a flow chart to outline the basic process they plan to use to settle a newly landed refugee or refugee family into Metro Vancouver: 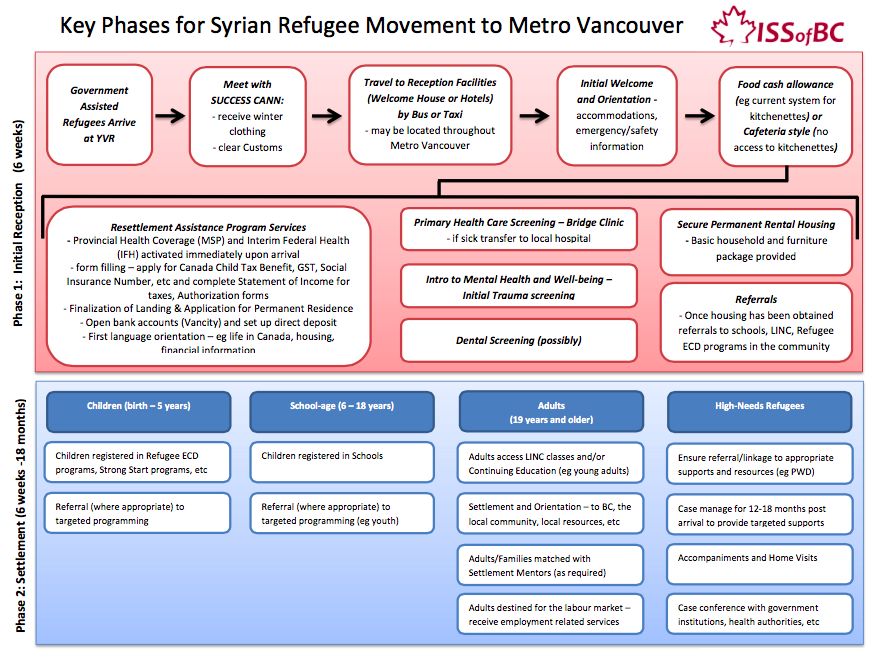 As for Mosaic, Kang said they’re beefing up their staff to be able to accommodate all the new refugees.

“We’ve already allocated resources and will continue to allocate resources until such time that we have contact with the government in terms of additional money they have for settling new refugees.”

Both Mosaic and ISSBC stress that the 3,000 plus refugees have transferrable skills, education, and training that will allow them to enter the labour market once they’re settled.