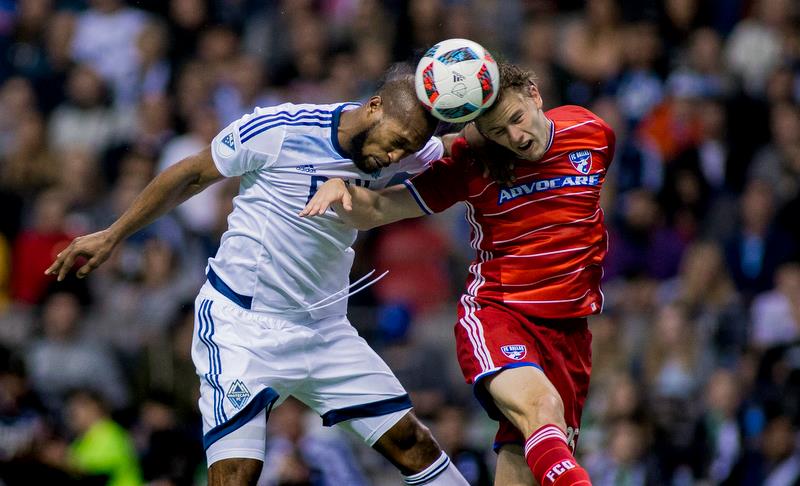 The Vancouver Whitecaps left the Houston oven where they played last week against the Dynamo and reconvened in the broiler of Frisco, Texas where they lost by a score of 2-0 against MLS leading FC Dallas.

The first half was characterized by both teams playing a measured game in an effort to minimize the space conceded and effectively manage their energy. While neither team created a clear cut, dangerous scoring opportunity, it was the home team who were closer to getting on the board, outshooting the ‘Caps 8-4.

As the second half got underway, things were looking unchanged. However, FC Dallas’ off the ball movement started to pay off when, at the 55th minute, Kellyn Acosta found a loose ball in the Whitecaps’ box and buried a shot past a sprawling David Ousted.

Only three minutes later, Maximilano Urruti doubled FC Dallas’ lead when the Argentinian peeled off the shoulder of Kendall Waston and Tim Parker to put away a fantastic shot.

If the task of getting any points from the league-leading team (unbeaten at home since August of 2015) in adverse meteorological conditions seemed like a very complicated mission, going down by two goals early in the second half made it impossible.

Due to the smoldering Texan heat, FC Dallas usually kicks off their home games at 7 pm local time. This was not the case on Sunday evening when they initiated hostilities at 5 pm with the thermometer indicating a not-so-fresh 32 degrees Celsius.

As a result, the weather was a big factor in how the game developed. The inclement heat made both teams slow things down in order to avoid any unnecessary exertion. Needless to say, it was not a game with fast, exciting pace or transitions.

This is the most boring game I've watched all year… And I watched every Portugal game🇵🇹. #VWFC

The Whitecaps bet their marbles on a game plan that favoured patience, organization, and tactical discipline. Keeping a clean sheet was the main objective. Strategic runs from Marcel De Jong and Christian Bolaños on the flanks along with slow, orchestrated, collective movement were the main tactical options employed by the Blue and White in their attempt to perforate the Texans’ goal.

While executed to perfection in the first half, the Whitecaps showed their defensive fragility yet again early in the second half. The heat seemed to start taking a toll and with tired legs came costly mental errors.

The Texan team capitalized with fantastic off-the-ball movement that allowed them to find the space needed to score goals, get a win, and help them cement their position as the best team in MLS.

Things are not getting any easier for the Blue and White. The Whitecaps now get ready to fly down to Trinidad and Tobago where they will face Central FC on Tuesday to open their participation in the 2016-17 CONCACAF Champions League. With only one-day rest and similar conditions, the match in the Caribbean will be equally as challenging.

Before the Whitecaps return to BC Place on August 12th to face the San Jose Eartquakes, they have another difficult stop in their four game road trip. Carl Robinson and his team will go toe-to-toe against the Colorado Rapids (who are surprisingly one of the best in the West) next Saturday in yet another complicated place to play when you account for the heat and the altitude in Colorado.

It will be Colorado, perhaps, where the Whitecaps supporters will be able to take a first look at the starting XI newcomers, David Edgar and Giles Barnes. Perhaps their inclusion in the team will start steering this ship into calmer waters?