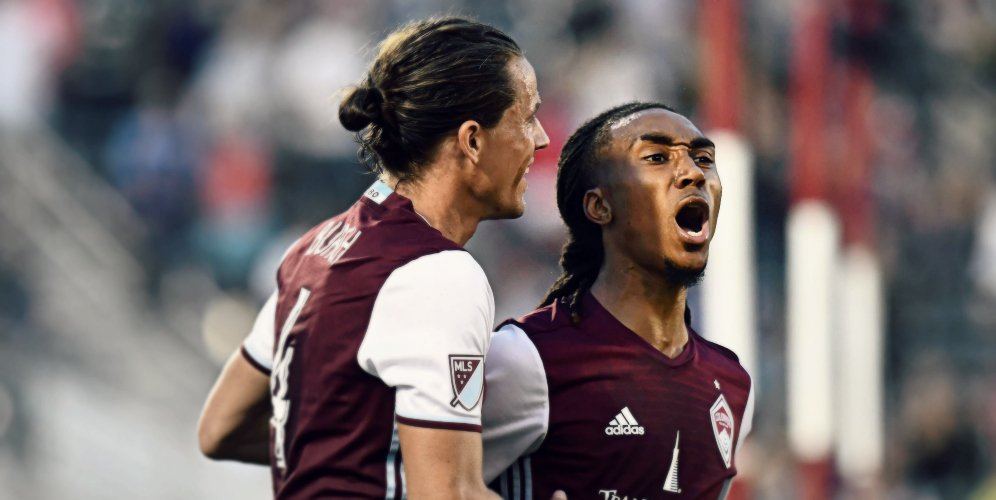 Well, at least the road trip is over.

The Vancouver Whitecaps ended a brutal sojourn — one that saw them travel from Texas to Trinindad & Tobago to the lofty peaks of Colorado — on a sour note, losing to the Colorado Rapids by a score of 2-0.

The game was marred by a series of defensive miscues, allowing Colorado midfielder Marlon Hairston to capitalize with a goal in the first half and an assist on Dominique Badji’s goal in the second. You could blame the altitude or fatigue for Vancouver’s subpar performance, though I’d advise not. This was just a bad, bad showing.

David Edgar made his league debut for Vancouver as a central defender, pushing Tim Parker out to right fullback. Both men will hopefully look at tonight’s match as a learning experience and improve. As far as inspiring confidence in a jittery fanbase goes, this performance was far from desirable.

1. Fire drill, everyone out

We were treated to what may end up being the default starting defensive line for the ‘Caps tonight. It was, shall we say, a less than stellar debut.

Despite David Edgar’s reputation as an organizer and a Premier League veteran, he seemed to be struggling to find his place in the game tonight. An attempt to play out from the back ended with a needless giveaway and a forced (albeit likely goal-saving) yellow. And on the first Colorado goal, note how he completely whiffs on Marlon Hairston’s arrival:

Yikes. Let’s not heap all the blame on Edgar, though. Both Tim Parker and Matías Laba go to ground for zero gain, failing to stop Burch and the ball from going to their intended targets.

“I think our decision-making, in both our half and their half, hasn’t been good enough,” said head coach Carl Robinson during his halftime interview with Perry Solkowksi, when asked what message he delivered to the troops during the break.

If that’s all it is, decision-making gaffes can be fixed. Repetitions and training can help a back four gel together and eliminate those questionable choices.

The only problem is that time is running out. After tonight, there are only ten league games remaining. The damage may already have been done.

Under Carl Robinson, the ‘Caps have made a lot of their attacks either via overlapping runs down the wing or incisive through-balls from Pedro Morales. In either case, there’s typically a target or two to complete the attacking run.

Tonight, there was not. Fun fact: you typically need a player to pass to to complete a pass.

I lost count of the number of times someone would finally get into position to deliver a killer ball, only to see the setup go harmlessly drifting off into the aether. It’s depressing to see a team so mentally disjointed, doubly so when individual skill like this is being wasted:

48' A nutmeg and a beauty of a cross👌 Well done Jacobson, well done.#COLvVAN #VWFC pic.twitter.com/Hfreh128gn

You can maybe give Giles Barnes a pass for this being his debut. Still, the rest of the team has been here long enough to hopefully know where to put a ball and, more importantly, where to go to get those balls.

Players like Pedro Morales, for example, are a known commodity both on this team and around the league. Everyone and their dog knows Morales can put a ball on a dime from three blocks away. All you have to do is present yourself as a target and the service will come.

Where is this team’s head right now to not have that basic knowledge at the forefront? Robbo’s comment about decision-making is looking more and more on the nose by the day.

3. Slow that hype train down

Look, I know we’re all over the moon about the potential being shown by Alphonso Davies. And yes, when he and Nicolas Mezquida were substituted into the game, it marked a sudden injection of attacking verve hitherto unseen by the visitors in this match. (Putting in Masato Kudo certainly didn’t hurt either.)

Sure, you can point to an interchange between Davies and Mezquida as the only really, honestly troubling moment for the Colorado defense, accuracy of said chance notwithstanding.

However, I would remind you all that Alphonso Davies is fifteen years old. He looks amazing because his body of professional work is a fraction of that from those around him. There’s simply not enough there to draw a reasonable conclusion about Davies’ ability and/or potential.

To put that another way: please don’t over-hype Davies as the saviour of this team. We have no way of knowing if playing him for 90 minutes tonight would’ve accomplished anything. (Damn you, linear progression of time!) Let the kid take it slow and gain his footing before taking the world by storm. He’s got plenty of time. Let him use it.

Seems like Hairston would have been a better pick than Lewis in 2014.