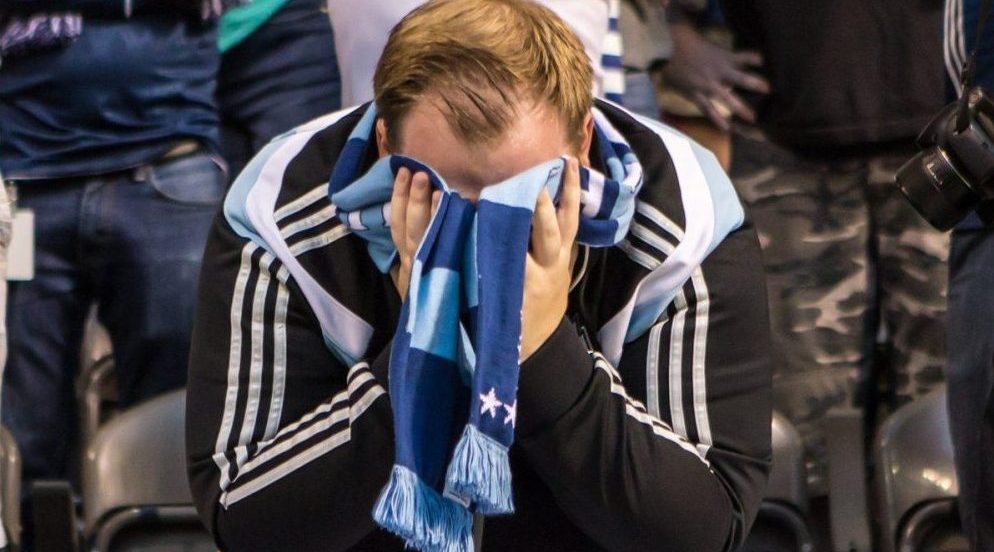 Across the western edge of the Great White North, people had two choices on this Saturday night: watch what was likely Canadian icon Gord Downie’s final concert; or watch a struggling Vancouver Whitecaps FC go into Sporting Kansas City’s home stadium and find some way to salvage their season.

Guess which one I did?

Arguably more tragic than the Hip, the ‘Caps fell 2-0 courtesy of a Jacob Peterson deflected goal in the first half and a re-taken Benny Feilhaber penalty in the second half. This leaves the ‘Caps stuck two points behind the Portland Timbers for the final playoff spot.

Well, at least I have the Tragically Hip concert on PVR.

There were rumblings earlier in the week that changes would be made to Vancouver’s starting eleven. Who would stay in? Who would warm the bench?

When the lineup sheets were revealed, three Canadians appeared on the backline: Marcel de Jong at left fullback, David Edgar in the middle beside Costa Rican international Kendall Waston, and Fraser Aird out right.

Remember when #WhitecapsHateCanada was a thing? Such fun. But I digress.

With no Matías Laba to help shield the backline, the challenge was on for the back four to prove they could get the job done. For the first forty-ish minutes, the defence bent but did not break.

And then they did.

After plenty of end-to-end action, @SportingKC get their goal. #SKCvVAN https://t.co/VOMYpkJU4d

Looking at the replay, it’s an unfortunate deflection on the SKC set piece that fools David Ousted as he’s going the other way for the first goal. One could look at the goal as just that — unfortunate.

One could also look at the marking (or lack thereof) on that set piece and wonder what in the sweet blue [expletive] is going on?!

No defender on the far post. Ball-deflector Jacob Peterson left unmarked in the six-yard box. Initial shot taken without much in the way of a challenge. In short: horrible organization and execution.

I seem to remember David Edgar being introduced as having that very specific credential – an organizer of defences. Apparently, don’t believe the hype.

Was it a penalty? Yes.

Was it an infraction? Yes.

Was Ousted almost there? Yeah, that’s awful close. But that’s not why they’re so hard done by.

.@b_feilhaber22 makes no mistake on the re-do for his sixth goal of the year. #SKCvVAN pic.twitter.com/4MuAKKWeWI

Bad defending, stone-cold penalty, officiating interference and close-but-no-cigar efforts at the last is basically a summary of the Whitecaps’ season so far. Throw in some goal-scoring ineptitude and you could effectively write the season summary by copying this game’s box score.

During the halftime break, sideline reporter Perry Solkowski conducted an interview with Whitecaps president Bobby Lenarduzzi – always a dicey proposition when a team is not only in a losing streak but losing the game at the break.

Solkowski, to his credit, did not turn it into a total puff piece. In fact, he threw a fairly serious accusation at the former Whitecaps player and coach: suggesting that the bargain-buy model of player discovery and acquisition simply isn’t working.

The response was… interesting.

SOLKOWSKI: You have always had a methodology of spending money smart, which you have to do in this league. Some people think that you’ve got to the point where maybe you need that difference maker and maybe you have to find that two- or three-million dollar player. Will you re-evaluate, and is it possible the Whitecaps may change that philosophy next year?

LENARDUZZI: We’ve always said that we’re prepared to actually look at those types of opportunities. I’m not so sure that it becomes a dollar value as opposed to a difference maker. Someone like a Diego Valeri stands out. He didn’t come in for a lot of money but has proven his worth time and time again in Portland. No question, we’ll continue down the path that we’re on as far as trying to invest in our youth development system, having players come through our USL team, looking for those players that perhaps don’t cost a lot of money but are going to be impactful on the team. Then there’s those two or three difference makers. Whatever value you want to attach to them, if they come in and they get the job done for you, then it’s irrelevant what you’re paying.

It’s that final phrase that intrigues me. You can read “it’s irrelevant what you’re paying” to mean either “money is no object” or “money doesn’t mean victory”. Knowing what we know about the Whitecaps front office’s MO, it’s very likely the latter.

That said, who knows? Maybe a bombshell, blockbuster signing takes place in January and suddenly Nakhi Wells is wearing a Sea-to-Sky kit in 2017.