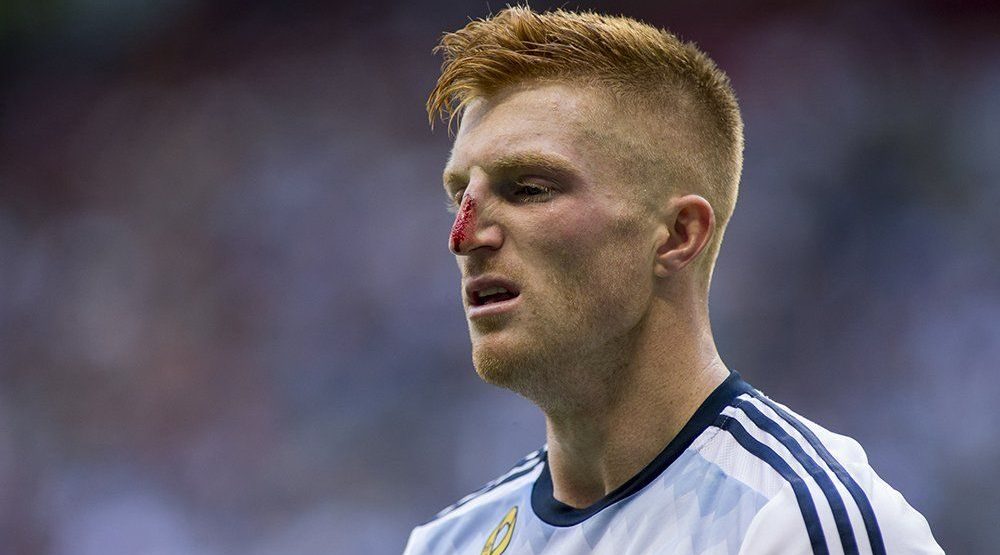 If you were looking for a pick-me-up in the world of Canadian soccer, it was not to be found at BC Place on this night. (Fingers crossed that’s not the case on Tuesday when Canada plays El Salvador.)

The New York Red Bulls, a team which came into Saturday’s contest with a single road win on the season and a record of futility in Major League Soccer against the Vancouver Whitecaps, had little to worry about against a pitifully anemic Vancouver attack and managed to buck both their negative trends with a 1-0 win.

The Red Bulls got their goal courtesy of Bradley Wright-Phillips, whose prolific scoring record over the past three seasons is now tied with San Jose’s Chris Wondolowski for the all-time best in MLS.

Meanwhile, the Whitecaps’ scoring record stands at one goal scored in the last seven games.

Is Nahki Wells available yet? How about now?

The referee should never, ever be the central focus of any sporting match. Someone should tell Saturday’s ref Sorin Stoica that.

What a horror show.

First, Stoica indulged in a whistle-happy opening ten minutes that destroyed most attempts by both teams to generate any sort of flow to the game. It’s hard to build up any attack, even on the counter, when you have to start and stop the game because you were sneezed on by an opposing midfielder.

Then, after warning head coach Carl Robinson to keep the (ahem) aggravated expression of opinions by his coaching staff under control, Stoica ejected Robbo and assistant coach Martyn Pert from the game following a botched throw-in decision.

Epic #UmpShow in Vancouver.@MLS please send this Sorin Stoica clown to MLB where he belongs. I mean, if you care at all about your product.

Let’s be clear: that call was horribly botched. How botched? Botched enough that every person in the building not wearing a blue officiating shirt was expecting a ‘Caps throw-in.

Fullback Jordan Smith was already preparing to throw the ball in until he was corrected by Stoica, which set off a cavalcade of outraged boos from the BC Place and a stream of incredulous dissent from Robbo & Co.

Stoica would improve somewhat in the second half, though his bizarre decision to show a yellow card to NYRB midfielder Mike Grella for unfathomable reasons underscored the referee’s incompetence on the day.

I know people give PRO a hard time but look at how clutch Stoica is here protecting Felipe from that ball. pic.twitter.com/ZCrADxfPPO

Is video review ready yet? Can we make it available for more than just penalty decisions? Please?

Oh, and can we gut the Professional Referee Organization (PRO) while we’re at it?

2. A tale of two strikers

I’m being incredibly generous here by calling Erik Hurtado a striker, as that implies he plays a role which includes duties such as scoring a [expletive] goal.

Service was not lacking in this game for Hurtado. Fraser Aird, Russell Teibert and Pedro Morales did their best to spring the American striker, and spring him they did. Multiple times, even. It did not go well.

Asked Robbo about Hurtado's many missed chances. Said Hurtado is "in tears" and "distraught" in the locker room after the match. #VWFC

At the other end of the field, New York’s Bradley Wright-Phillips was much more productive.

I think I speak for all Whitecaps supporters when I say…

It’s not looking good, people, though you probably already figured that out.

With six matches to play, the Whitecaps are in 9th in the western conference, four points behind the Portland Timbers for 6th place and the final playoff spot.

On top of that, the teams around the ‘Caps in the standings all have games in hand, meaning that gulf could easily widen in a matter of hours (or days, depending on when you’re reading this).

#VWFC now with 8% playoff chance. Can get back to 17% with win against #CrewSC. More scenarios: https://t.co/SZpl5PQ9KM

Losses are no longer acceptable. Draws are not enough, either. The safety net around the needed results for this team is gone. It’s either run the table or give up and tank for a draft pick, which is about as stupid an idea in MLS as playing Erik Hurtado as a lone striker.