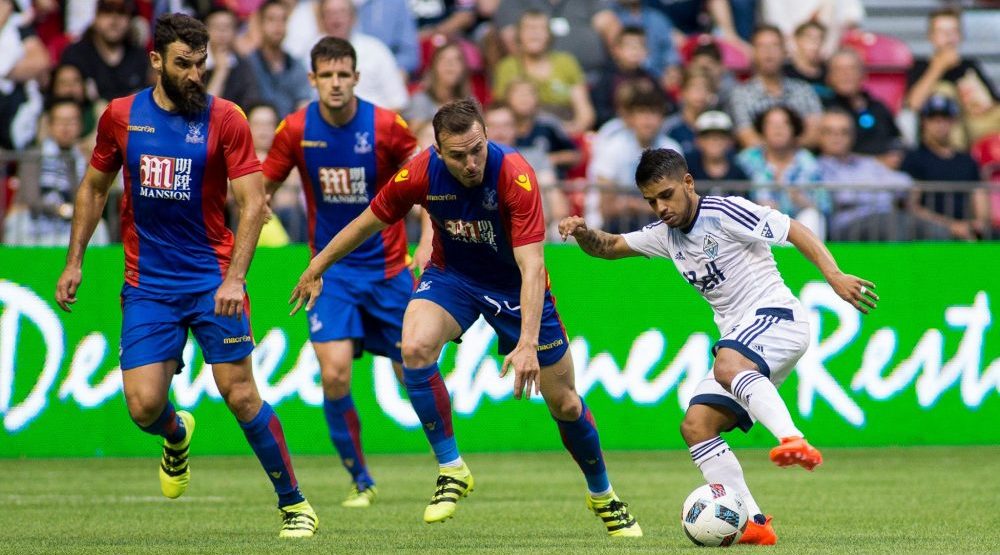 Psssst. Hey, you! Yeah, you, the Vancouver Whitecaps FC supporter feverishly checking Pokémon GO to see if that oddish will show up on the SkyTrain again. First of all, stop hogging all the oddishes. Some of us have a pokédex to fill.

Secondly, did you know the Whitecaps played a match on Tuesday night? No, it wasn’t on TV or radio. No, it wasn’t a league or cup match. It was a mid-season friendly against English Premier League side Crystal Place that ended 2-2 after goals from Vancouver defenders David Edgar and Kendall Waston and two from Palace striker Fraizer Campbell.

Ssshhhh! Keep your voice down! It’s a secret. I mean, why else would the team hold a match on a Tuesday in the middle of the regular season before a grueling road trip and not broadcast it?

Sure, there’s a possibility this is all a hoax. After all, surely no sane team would subject their players to further fatigue and chance of injury before a trip to Texas in July. Then again, my editor is asking questions such as “where is the match report” and “why isn’t the match report done”, so we’ll leave the hoax status as “unconfirmed”.

Some alleged highlights of this so-called match showed up online this morning. Let’s watch them together, shall we?

0:01 – Vancouver. A city cloaked in silence as millions of people abandon their cars to catch that [expletive] elusive aerodactyl to try and win back their local pokégym.

0:11 – Marcel de Jong appears to have restored the “man bun” quota following Russell Teibert’s normalized hairstyle. He also appears to have exponentially more match fitness than he did in his Real Salt Lake cameo, nicking the ball and putting a solid chance on net.

0:18 – The answer to the question of what is the meaning of life, the universe and everything may be “42”, but that is not the answer to a successful short corner kick. Wicked bend (deflection?) on the shot by #42, Palace midfielder Jason Puncheon, forcing goalkeeper Paolo Tornaghi into a sharp save.

0:31 – Crystal Palace defender and vice-captain Damien Delaney proves that anybody can screw up a golden chance. Maybe that’ll convince people to ease up on Erik Hurtado.

0:46 – Nope. Great job by Nicolas Mezquida to keep his feet, though. I was expecting a dive to the turf and was pleasantly surprised that he kept the play going and made a lovely setup to Fraser Aird, who in turn set up Hurtado. And then… nope.

0:50 – Even Cristian Techera is staying on his feet! Sure, he’s still going one-on-eleven but at least he did something with that Kianz Froese pass. As for Hurtado… nope.

1:01 – Man Bun de Jong floats a teasing cross into the area that goalkeeper Julián Speroni handles with ease. Meanwhile, Jordan Harvey considers growing a man bun for roughly two nanoseconds before determining he still has the best hair on the team and celebrating with a moustache waxing.

1:14 – Goal sighting! Whitecaps 1 – 0 Palace. This is not the first time a short corner involving Cristian Techera and a defender results in a goal. See also:

In unrelated news, I am already sick of seeing people call it “a goal on his [David Edgar’s] debut.” Edgar has not debuted. One cannot debut in a friendly, least of all a friendly that may or may not have taken place. Textbook header, though. Well done.

1:41 – The Vancouver defence is sliced to pieces but luckily the shot goes over the bar — a.k.a. the 2016 season in a nutshell. Also, Marco Carducci sighting! We are at peak Marco, folks.

1:51 – Goal! Whitecaps 1 – 1 Palace. Midfielder Andros Townsend makes the surging run into the gap where Cole Seiler previously was and Tim Parker — who subbed into the game not a minute prior — should’ve been, putting a dangerous ball into the six-yard box that Frazier Campbell has no problem converting despite the lunging efforts of Whitecaps FC 2 defender Sem de Wit. Incidentally, de Wit also subbed into the game at the same time as Parker, replacing Kah at centreback. That’s a canny exploitation of the field by Crystal Palace. Are we sure this was a friendly, assuming it even happened at all?

2:09 – Goal! Whitecaps 1 – 2 Palace. Another surging run from Townsend, this time skipping past Matias Laba before sending a lovely ball over the top to forward Connor Wickham. Wickham’s centered ball is only partially blocked by Waston and the ball rolls fortuitously to Campbell, who beats both Parker and Carducci to bag his second goal in five minutes. It’s a good thing this is a meaningless match with a questionable existence, or else I’d be shaking my head disapprovingly at another sub-par spot of defending by Laba and Waston.

2:24 – Crystal Palace’s shirt sponsor’s logo looks like it should belong to an old-timey butcher. According to Wikipedia, it instead belongs to a Gibraltar-based online casino. Now I want to gamble and eat sausages. Damn you, Crystal Palace.

2:35 – Crystal Palace has supporters? Or is that just travelling family brought along for a North American vacation?

2:38 – Goal! Whitecaps 2 – 2 Palace. Maybe Vancouver should just take all corners short from now on. Christian Bolaños taps the ball in to former Victoria Highlanders(!!!) striker and current Whitecaps FC 2 fullback Brett Levis, who serves up a juicy cross for Waston to head in. Waston has zero issues beating his two (maybe one-and-a-half) markers to the header. More worryingly if you’re Palace (assuming this match is real and/or relevant), coverage elsewhere in the penalty area is dreadful. If Waston doesn’t get there, Masato Kudo and Kianz Froese are lurking nearby and in dangerous positions, Puncheon’s fistful of Kudo’s jersey notwithstanding.

2:58 – Hike those shorts back down, Jordon Mutch. More like Jordon Too Mutch, amirite?

3:15 – Another Brett Levis (swoon) cross, another deadly header. This time, it’s Whitecaps FC 2 striker and part-time lamppost Kyle Greig (dude looks every bit the 6’2″ target man) with the delivery. Unfortunately, said delivery is directly at Speroni’s right foot and the goalkeeper does well to keep the score level.

3:27 – Laba appears to be the only Whitecap to have swapped jerseys. Either that, or he’s really got to learn to keep his hands to himself when defending on the run. Matias, “trying to swap shirts early” is a metaphor for bad defending, not a helpful suggestion.

“I talked about fundamentals in footballers … and [Edgar] does them very well. His defending, his footwork, his reading, he never puts himself in [bad] positions. Obviously, he scored the goal — by a deflection, I believe, but he’ll claim that — but it was a good, positive 60 minutes from him.”

“One thing Carl [Robinson] said in the pre-game talk was to just enjoy it. He said, you’re going to make mistakes, but just have fun and work hard. It’s against a Premier League team, so you’re playing against some of the top players in Europe. It was a good test.”

–fullback Brett Levis, on keeping his nerves in check