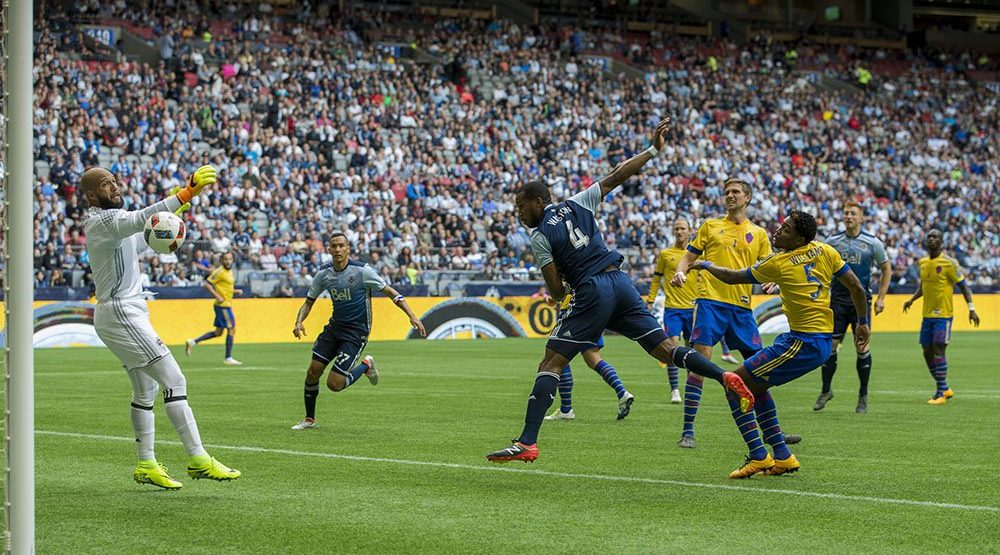 Hello? Is this the Vancouver Whitecaps FC defence? I’d like to formally lodge a complaint.

At least this one didn’t cost you the Voyageurs Cup, just a full three points. Small steps, right?

The Whitecaps took an early lead off a Kendal Waston header, which lasted until Kevin Doyle tied the match for the Rapids in 59th minute. Cristian Techera earned a penalty and scored his first of the season in the 87th minute. That looked like the winner until Axel Sjoberg broke Whitecaps’ hearts when he levelled the match in the 5th minute of time added. Vancouver had to settle for a 2-2 tie.

“I don’t think we deserved to win the game if I’m being honest,” Robbo told reporters after the match. “The way it panned out in the last minute was disappointing but it was probably a fair result.”

And on that positive note, let’s take a look at our three kicks.

It’s not too much of a stretch to say Jordan Smith has not exactly won himself many supporters since his arrival in Vancouver. Tonight, he may have undone some of that damage.

@ThatRituroGuy Smith?! He's been a horror show. A black hole whenever he gets the ball, and repeatedly caught out of position.

Some. Not all. Some.

Did he still give up far too many chances on defence? Oh my, yes. Kevin Doyle and Shkelzen Gashi had their way with the Costa Rican defender time and again. If Smith really wants that starting job to remain his once Aird is ready for action, he needs to be sharper when he’s not attacking.

Love that long throw, though.

2. Knocked off the Scooter

Robbo’s big decision to bench the speedy winger known as “Scooter” last week caused ripples of fear around Whitecaps land. Was Manneh on the trading block? Was he injured?

As it turned out, neither was true.

The coach wanted to “send a message” to the exciting yet inconsistent winger. Manneh seemed to get the message to start the game, causing a brief moment of excitement as he attempted to duplicate his goal in Philadelphia. The chance was well defended, though, leading to audible groans from the sellout crowd at BC Place.

Sadly, that was not the worst thing to happen to Manneh on the night. As he attempted to latch onto a long ball, putting on the jets and nearly clear of all markers, Colorado defender Jared Watts fouled Manneh hard, earning a yellow card for the cynical challenge.

This led to the second audible response from the assembled crowd: a collective sharp inhaling as Manneh stayed on the ground, clearly in pain.

Manneh attempted to stay in the game but ultimately the injury got the best of him and he was subbed out for Erik Hurtado. (Guess how well that worked out… But that’s for another time.)

I’m not sure if that’s bad, better or about the same. Either way, it’s another knock that Manneh – and his teammates – certainly didn’t need.

3. Rebuilding the tower of power

The other Costa Rican Whitecap on the hot seat, Kendall Waston, did himself plenty of favours tonight.

In a season riddled with suspensions and international absences, Kendall Waston has fallen far from grace in the collective eyes of Vancouver supporters. He needed to come up big tonight against one the Western Conference’s top teams (and I still can’t believe I’m referring to the Colorado [expletive] Rapids when I say that).

A goal will do that.

A goal-line clearance will do that.

An unblocked cross leading to a heartbreaking goal will not do that.

Well, at least Waston recovered from that horrible aerial duel that led to Colorado’s first chance early in the game. Waston losing aerial duels is like a fish drowning; it shouldn’t happen because you do the opposite of that for a living.