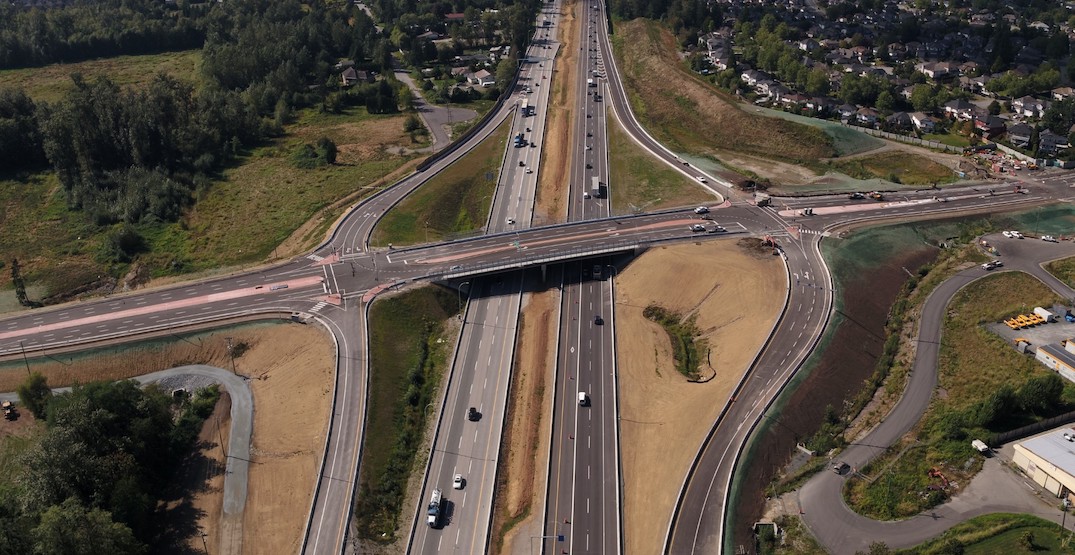 Aerial view of the newly completed 216th Street interchange on Highway 1 in Langley Township. (Government of BC)

The new 216th Street interchange on Highway 1 within Langley Township is now open to drivers, with an improved design that not only supports east-west highway accessibility but also north-south travel within the municipality.

The four-lane interchange also has pedestrian and cycling pathways across the overpass over the highway.

“The Township of Langley has grown significantly in recent years, and safe access has been identified as a priority,” said Claire Trevena, BC Minister of Transportation and Infrastructure, in a statement.

“This new interchange provides an alternative crossing of Highway 1, relieving traffic congestion at the 200th and 232nd street interchanges and providing additional access to the freeway.”

Additionally, as part of this project, Highway 1 between 202nd and 216th streets has been widened from four lanes to six lanes.

There is also an extension of high-occupancy vehicle (HOV) ramps to and from 202nd Street, effectively creating a continuous HOV corridor from Grandview Highway in Vancouver to 216th Street in Langley. Noise mitigation measures have been added on both sides of the highway along the west side of 216th Street from the highway to 88th Avenue.

“This much-anticipated new interchange is an important transportation link that will greatly enhance travel for residents, businesses and visitors,” said Jack Froese, mayor of the Township of Langley.

“Not only will it reduce congestion, create shorter commute times and move people and goods more efficiently throughout our region, the HOV lanes and improved access for walkers and cyclists will encourage people to make transportation choices that are better for the environment.”

The municipal government also provided an additional $5.3 million for most of the project work on 216th Street north of the interchange.