It’s finally here! The 2014-15 National Hockey League season is nearly upon us. Feel free to disregard and completely disassociate with anybody who claims the season started with training camps and/or preseason play. Wednesday, October 8 marks the opening night of this campaign and I’m here to provide you with everything you need to know before puck drop on Wednesday evening.

A lot has changed since we last left our beloved (most of the time) Canucks in the NHL regular season. They were bumbling their way down the stretch, going 9-15-2 after the start of February and sliding comfortably into the 12th spot in the Western Conference. Admittedly, it was a low point in Canucks history. It was the first time since 1998-99 the Canucks finished that low in the Conference standings. To give you some context of the time, in 1998 the Monica Lewinsky trial was in full swing, Titanic won the Oscar for best picture, and Iron Mike Keenan was on his last legs as head coach of the Canucks. 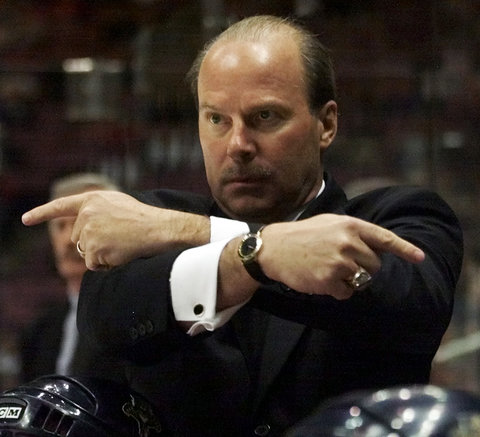 Things have changed drastically over the summer, so it’s time to get you caught up on the changes and ready for the upcoming season.

Out with the old, in with the new

The Canucks went through some drastic changes in the offseason, on and off the ice. With this last season being as unsuccessful as it was, ownership in Vancouver opted to fire both general manager Mike Gillis and head coach John Tortorella.

In what may be the most popular decision in recent years (read: all time), Canuck legend Trevor Linden was brought in as president of hockey operations, who then hired former Bruins assistant GM (and one time Canuck) Jim Benning and together they hired Willie Desjardins as head coach. Desjardins is fresh off an AHL Calder Cup championship with the Texas Stars and was highly sought after among NHL teams with coaching vacancies. In the end, he chose Vancouver over Pittsburgh (na na na boo boo, Jimmy Rutherford). No word yet on wether that has anything to do with both Linden and Desjardins being card carrying members of the Medicine Hat Mafia. 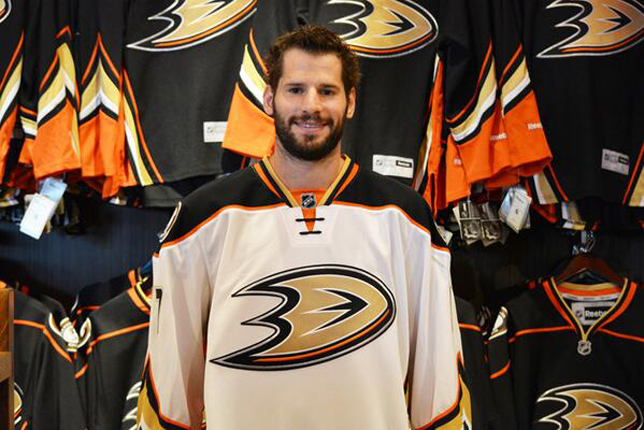 I won’t lie, the above picture hurts. It hurts a lot. He just looks so happy.

With Linden and Benning hired well in advance of the draft, many expected a splash to be made by the two hoping to put “their stamp” on this new team. Roberto Luongo was already gone and as it turned out, a couple more fan favourites were shortly thereafter shown the door. Benning traded Jason Garrison to Tampa Bay and Ryan Kesler to Anaheim, picking up Derek Dorsett, Nick Bonino, Luca Sbisa, and ultimately Linden Vey as well.

The draft itself was far less exciting, as the Canucks picked up safe picks Jake Virtanen and Jared McCann in the first round, before selecting Boston College (please be another Cory Schneider) Thatcher Demko and Nikita Tryamkin, who may actually be a giant (he’s 6’7″, 230 lbs), in 2nd and 3rd rounds respectively.

There were rumblings that the Canucks would attempt a move to the 1st overall selection and take Kootenay Ice standout Sam Reinhart, but a trade never came to fruition. In addition to the wheeling and dealing that occurred surrounding the draft, Jim Benning signed veteran playmaker Radim Vrbata to a very manageable two-year contract. Vrbata should play the majority of the year with the Sedins if all goes well.

Oh, and I’m not sure if you heard but Jim Benning also picked up Ryan Miller. He’s a goalie. In Vancouver. Talk amongst yourselves.

For more on the new guys, be sure to check out Rob’s Newcomers piece.

Take a look around

While the Canucks were busy in the offseason, other teams in the Pacific Division and Western Conference weren’t exactly standing pat. In the Pacific, Anaheim grabbed Kesler and Edmonton’s young guns have one more year to live up to the hype. Elsewhere in the West, Colorado lost Paul Stasny but picked up Jarome Iginla, Chicago picked up Brad Richards, Dallas nabbed Spezza and Hemsky and the St. Louis Blues added the aforementioned Stasny. Yikes… 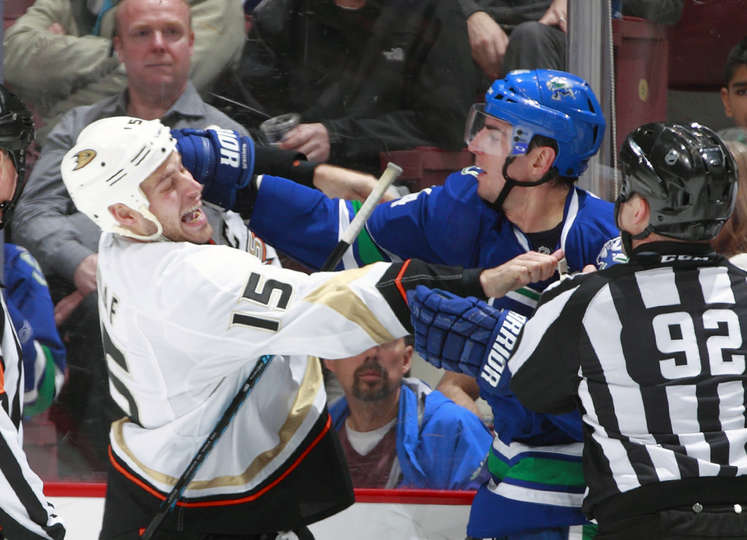 During the regular season, the West went a combined 246-150-52 against the East, the LA Kings won the Stanley Cup, and if that trend is to continue, the Canucks are going to have to find a way to win within their own division and conference. The Canucks managed a pedestrian 22-21-7 record against the West last year (10-8-3 against the Central, 12-13-4 against the Pacific), so that will have to change if the team wants to make the playoffs (hint: they really, really do). 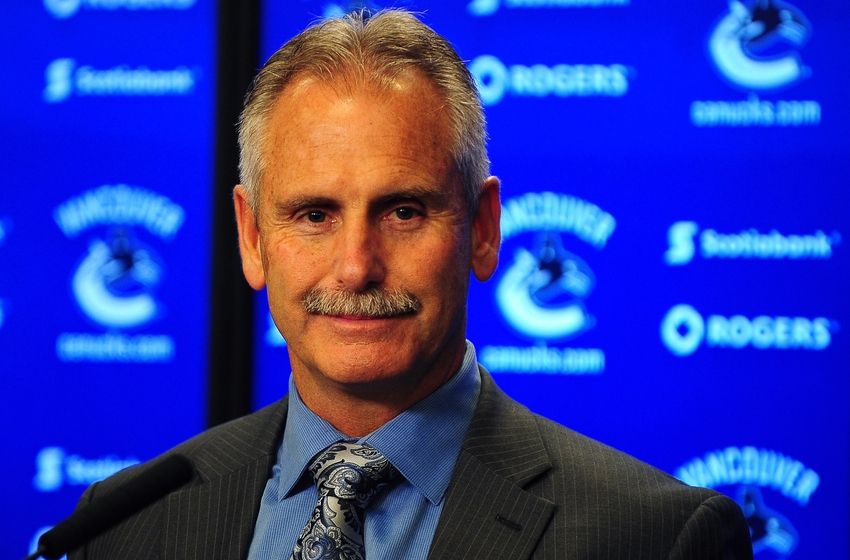 Speaking of postseason, what are the chances Vancouver find themselves back in the playoffs this year? Well, there are a few things that will need to happen in order for the Canucks to be competitive come April.

With a new coach comes a new system. Gone are the penalty killing Sedins, the shot block parties (see what I did there), and the trending topic of TopSixtito (please, please be the end of TopSixtito). It will take time for the players to adjust to the new playing systems of Willie and company, so the sooner that happens, the better.

In the running for understatement of the century, there are several Canucks players that will need to have bounce-back seasons. The Sedins, Alex Edler, Alex Burrows and Jannik Hansen are among those that will need to seriously turn things around if Vancouver is to be successful. The Sedins couldn’t cope with the workload and couldn’t put up more than 50 points each, while Hansen, Burrows and Edler (for multiple reasons) underperformed massively. Part of that is due to the latter three owning the three lowest PDOs** on the team. All signs point to these Canucks improving on last year’s poor numbers, but the necessary outcomes don’t stop there.

**PDO is the closest thing we have to measuring “puck luck”, combining player shooting percentage with the save percentage of said player’s goalie while the measured player is on the ice

If the preseason indicates anything (I’m totally convinced it doesn’t), the Canucks goaltending situation is in a good place. Sure, there were calls for Eddie Lack to start over the $6 million Miller, sparking another mini-goalie controversy – but barring unforeseen disaster between the pipes, it appears Miller is adjusting to Vancouver and Lack is playing very well. That will have to continue, particularly as the rest of the Canucks adjust to the new systems. Assignments may be missed and entire shifts completely lost due to miscommunication or unfamiliarity. It would go a long way towards securing a few early wins if the goaltending is sharp in those sorts of situations.

While Hunter Shinkaruk and Nicklas Jensen were both sent down to Utica after failing to make the final roster cuts late in the preseason, it’s likely fans will see them again soon. Top line minutes with the AHL Comets should provide both young prospects an opportunity to get comfortable playing against the pros. Bo Horvat, though injured at the moment, has stuck with the team for now. If the Canucks are going to challenge the top teams in the West, their young talent must be a factor. The aging core of the team (Sedins, Bieksa, Hamhuis, Higgins, Burrows) have been much maligned, but with an injection of youthful enthusiasm, we could see a positive change in play.

Finally, Willie Desjardins is going to have to get the Canucks players to buy what he’s selling, pick up what he’s putting down, and everything in between. Lauded as a “player’s coach”, it would appear Willie has the attention of the room thus far. Players have already said they like his style and plan, differentiating between this year and last year.

Henrik on way #Canucks new coaching staff handled preseason: ‘it’s nice to see that they have a plan.’ Perhaps a commentary on last year

We’ll see what happens when the regular season rolls around and the Canucks bottom out on the inevitable speed bump that seems to arise for this team every year. Desjardins likely has a pretty lengthy leash from the new front office management, but he’s about to learn what coaching in Vancouver can do to a man. 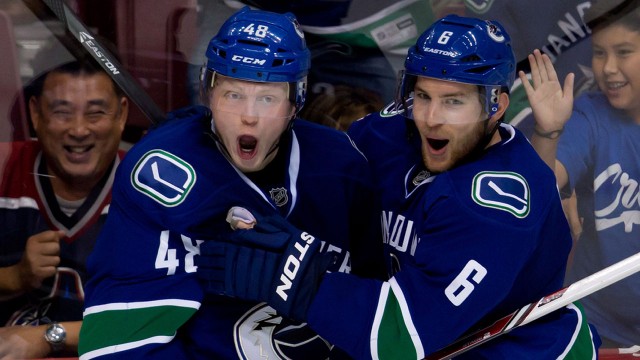 Let me preface this section with a statement: There are a lot, and I mean a lot, of things that need to go right for the Vancouver Canucks to make the playoffs this year. With a ton of questions swirling around the team, there is no air of superiority that has existed in Vancouver for the last half a decade. This is the new Pacific Division. No more byes into the playoffs. However, hockey in the latter half of April is not out of the question.

Most of what needs to happen can be said for a lot of teams. If the Canucks stay healthy, keep the puck out their own net, and receive secondary (or primary for that matter) scoring, they can be competitive. Other unique intangibles include adjusting to Willie Desjardins and his coaching style. If everything goes right for the Canucks, I can envision Vancouver grabbing one of the two wild card positions that will be hotly contested down the stretch.

Official Prediction: Canucks are a playoff team again, finishing 4th in the Pacific Division and grabbing the second wild card spot in the Western Conference with a record of 45-31-6.